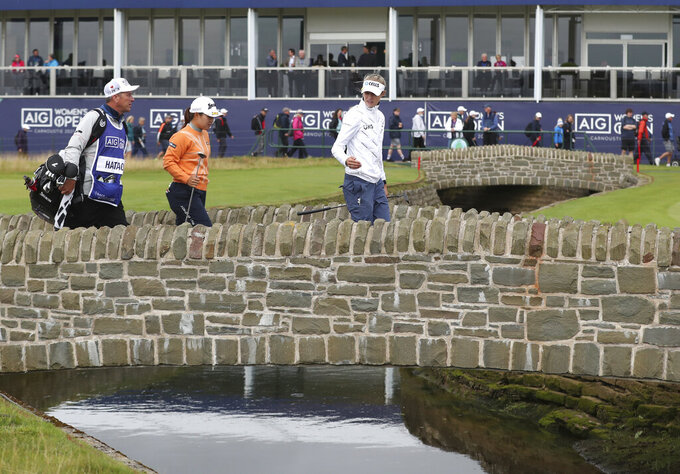 United States' Nelly Korda, right talks to Japan's Nasa Hataoka as they cross the stone bridge to the 18th green during the first round of the Women's British Open golf championship, in Carnoustie, Scotland, Thursday, Aug. 19, 2021. (AP Photo/Scott Heppell)

Two weeks after winning a gold medal at the Tokyo Olympics, the top-ranked Korda began her bid for a second major title in two months by shooting 5-under 67 to share the first-round lead at the Women’s British Open on Thursday.

Korda rolled in a 5-foot putt at No. 18 at Carnoustie for her eighth birdie of a round that also contained three bogeys in overcast, chilly but largely wind-free conditions over the links in eastern Scotland. She was later joined on 5 under by Sweden’s Madelene Sagstrom, who has never recorded a top-10 finish at a major, and South Korea's Sei Young Kim, a major champion last year and the No. 4.

The 23-year-old Korda is the new superstar of women’s golf, having climbed to No. 1 by winning the PGA Championship in June and followed that up by winning the Olympic golf tournament in Tokyo this month. The American has four wins in 14 events in 2021 and said she has a “target on my back” for the last of the five majors.

“I try to take the mindset of every day’s a new day,” said Korda, who is a combined 87 under par for her last 21 rounds. "It doesn’t matter what my ranking is. Everyone’s going into this event prepared and wanting to win.

“That’s kind of like the mindset that I try to take into every event.”

The Women’s Open is her first event since the Olympics and she carried the momentum to Carnoustie, holing a left-to-right 20-footer for birdie at No. 3 — the first of three birdies in a four-hole span to immediately throw down the challenge to her rivals.

Korda, who wore bulky, oven-style mitts between shots at times during chilly morning conditions that contrasted with what she experienced in Tokyo, rebounded from her second bogey of the day, at No. 12, by making a downhill putt for birdie at the next and picked up another shot at the par-5 14th after reaching the green in two.

She finished birdie-birdie by hitting her approach close at No. 18 with an 8-iron from the center of the fairway.

“Very happy,” Korda said of her start. “Honestly, we didn’t have much wind today. It was very chilly in the morning — that was the only thing against us. Other than that, the wind kept calm and I took advantage of it.”

Korda has been on the road for six weeks, because of her appearances at the Evian Championship in France — the fourth major of the year, where she placed 19th — and then the Olympics, where she had a one-shot victory.

“A little tired but I am going to give it my all these next three day, go home next week, and have one week at home. Sleep in my bed for the first time in six weeks — that will be nice,” she said. “And then Solheim and we start up again.”

The 77th-ranked Sagstrom was playing in a group containing European Solheim Cup captain Catriona Matthew, just behind Korda, and will have left a positive impression ahead of the naming of the six wild-card selections on Monday.

She birdied four of her first six holes and twice held a two-shot lead on her back nine. She kept her round going with some decisive par putts but couldn’t do so at No. 18 after finding a bunker to the right of the fairway off the tee. She hit out to leave herself a tough up-and-down for par, but leaked her par putt right.

“Of course I want to show off my game to her, I can’t deny that,” Sagstrom said of Matthew. “I mean, I’m playing well at the moment. Who knows where her mind is at right now?”

Kim is in the mix at another major having won one for the first time at the PGA Championship last year. She also finished third at the ANA Inspiration in April.

Her only dropped shot was at the par-4 15th, which she reached in the lead after making birdie at No. 14 to move to 6 under.

Georgia Hall of England, the 2018 champion, bogeyed the last to drop out of the lead and to 4 under alongside an unheralded playing partner in 21-year-old Scottish amateur Louise Duncan, who goes to Stirling University in Scotland.

“It was a ridiculous amount of fun, I wasn’t expecting that at all,” said Duncan, who made an eagle and four birdies. “I was so nervous at the start. I was shaking and could barely put the ball on the tee. To actually make contact and it go straight was a bonus."

Former major champion Lexi Thompson was in a group at 3 under, while defending champion Sophia Popov chipped in for birdie at No. 1 on her way to shooting even-par 72.