Paris Olympics moves up with two presidents on center stage 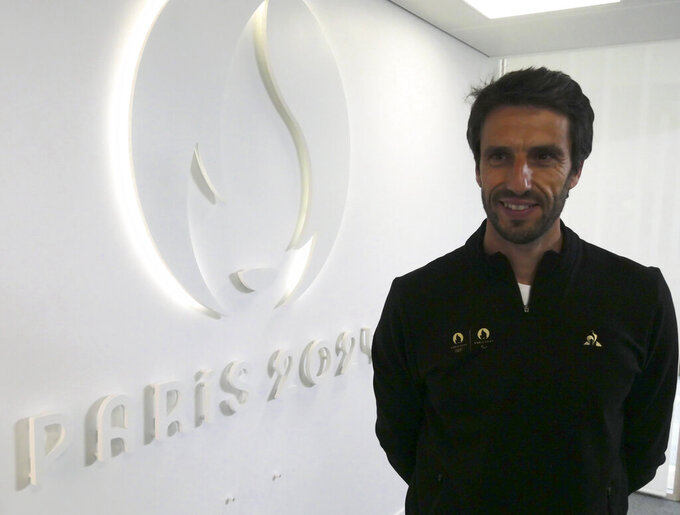 FILE - In this June 1, 2021, file photo, Paris 2024 president, and three-time Olympic champion, Tony Estanguet poses for a photo outside Paris. The 2024 Paris Olympics emerges fully on Sunday, Aug. 8 from its unexpected extra year in the shadows with a formal handover from Tokyo. (AP Photo/Nicolas Garriga, File)

TOKYO (AP) — Amid the stress of postponing and finally staging the Tokyo Olympics, the next Summer Games host has moved in relative calm with steady leadership.

The 2024 Paris Olympics emerges fully on Sunday from its unexpected extra year in the shadows with a formal handover from Tokyo.

French President Emmanuel Macron will link up remotely from home with the Paris organizing team in Tokyo led by its president, three-time Olympic champion Tony Estanguet.

Two 43-year-old presidents, barely a gray hair, both at ease speaking English — a contrast with the Tokyo Olympic leadership that changed in a fraught final year of preparations.

Macron and Estanguet began working together within days of the French presidential election in May 2017. The new head of state was thrust into a bid campaign Paris won weeks later in a deal that saw Los Angeles take the offer of hosting in 2028.

The two men have since kept French sports and politics in Olympic accord.

Sports at the Eiffel Tower and Chateau de Versailles, while revitalizing the Saint-Denis suburb, are part of an on-budget Paris Olympics exactly 100 years after the previous one.

“We have a good relationship,” Estanguet said of Macron in an interview with The Associated Press in Tokyo, “we can call each other, we can have a direct discussion.”

They have helped steer France and Paris away from the headlines that typically bug future Olympic hosts. A Wikipedia page entitled “Concerns and Controversies at the 2024 Summer Olympics” awaits its first entry.

“We are incredibly lucky to have Tony,” Macron said of Estanguet, a gold medalist in canoe slalom in three of four Olympics from 2000 to 2012.

“We cannot organize the Games in good conditions if we don’t have a respected athlete as the French team boss,” Macron told French sports daily L’Equipe after attending the opening ceremony in Tokyo.

In a political job, Coe had acquired some skills as an elected lawmaker from 1992-97. He was also involved in Olympic politics early in his track career.

Estanguet arrived from more modest roots, in a lower-profile sport, later in his career. He was elected by other athletes in London to represent them as an International Olympic Committee member.

“It was not my background,” Estanguet said of mingling and making decisions with sheikhs and princesses, millionaires and sports leaders. “But it was a fantastic way of learning things.

“I try to listen. To all those people who have a fantastic experience, much better than mine,” he said, though adding: “At one point, you have to take responsibility and go into your canoe, alone.”

Estanguet describes his identity as an athlete as “ambitious, serious, humble also."

"That’s also my profile (now) and I think it’s key in this kind of position,” he said.

Coming from a family steeped in whitewater canoeing in the southwestern French city of Pau, he claims to be not political. Still, he must pay attention to the presidential election in April. Macron’s fight for re-election shapes up as a rematch with his 2017 opponent, far-right populist Marine Le Pen.

“Of course as an athlete, again, I will tell you it is easier when (you have) continuity. When you are still in your comfort zone.” Estanguet said. “We will have to adapt for anything that will happen."

On Sunday, Estanguet and Macron will promote an Olympic host whose innovations include an opening ceremony across the city. On July 26, 2024, Paris will stage its welcome on and along the River Seine.

Estanguet said he wants people who think they know his home to say: “Wow, what a country, what a city.”