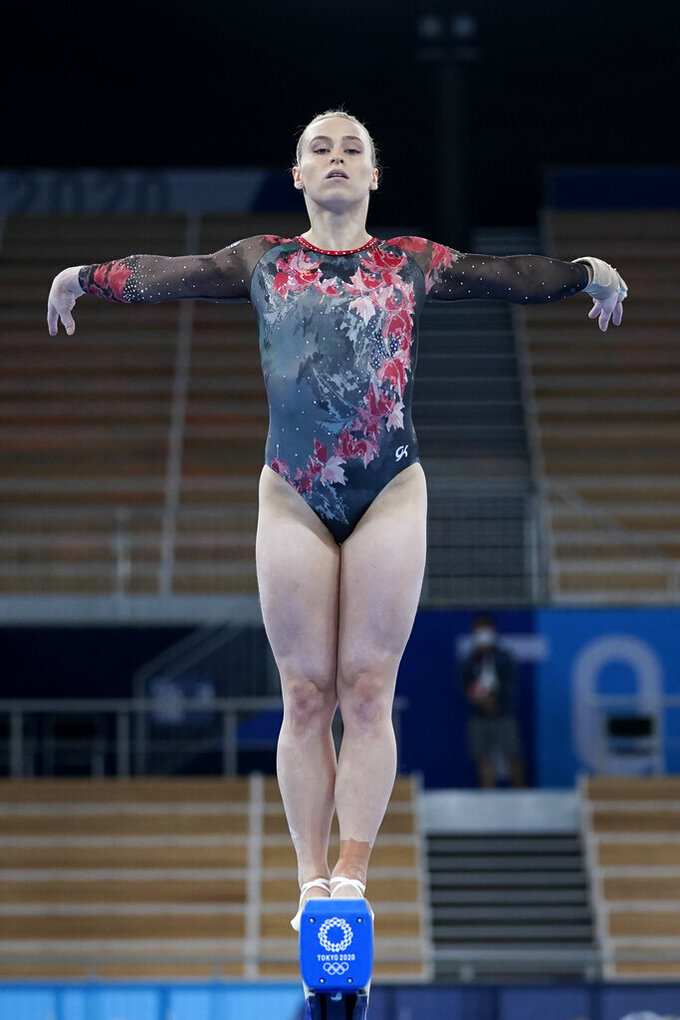 Elsabeth Black, of Canada, performs on the balance beam during the women's artistic gymnastic qualifications at the 2020 Summer Olympics, Sunday, July 25, 2021, in Tokyo. (AP Photo/Ashley Landis)

Thousands of hours of practice. Dozens upon dozens of competitions. And not once has a judge watched the new Olympic all-around champion do her thing — not even on uneven bars, where the 45-second set she plans doing in Sunday's event finals is a free-flowing series of connections and releases that make it seem as if she is floating — and thought “that's flawless.”

Lee is not alone. No elite gymnast — not even American star and six-time Olympic medalist Simone Biles — has received a perfect score since the sport moved off the “10” system to a new Code of Points in 2006. Scores are now a combination of the difficulty of the routine (which is open-ended) and the execution, which is based on a 10.0 scale.

In theory, “perfect” execution is possible. It's just that no one has ever done it. A reality that long ago led Lee to make peace with the idea that a faultless routine is a myth, no matter how it may feel to her or how it may look to everyone other than the two people in blue blazers sitting at the judge's tables.

Instead, she shoots for what she considers her best, perhaps out of a sense of self-preservation more than anything. Her 15.400 on bars during the team final was the highest of the night by any athlete on any event and a spectacular display that helped the U.S. claim silver.

It also included 1.4 points of deductions, and she could sense them piling up even as her teammates roared encouragement. Hard to blame her for sounding relieved on Friday when talking about her impending switch to competing collegiately at Auburn.

“(I want to) kind of get away from this elite atmosphere just because it’s so, like, crazy,” Lee said.

“It’s hard in that sense because it is such a sport where you’re trying to reach perfection, but perfection is unattainable," said three-time Olympian Ellie Black of Canada. “I still struggle sometimes. It’s not like you ever get something and it’s easy for the rest of your life and the rest of your career.”

For Lee, a release of sort awaits.

NCAA training is limited to 20 hours a week. The difficulty and length of routines are a step down from what Lee is used to and the 10-point scoring system remains very much alive.

A shot at drilling a routine and being rewarded for it awaits, even if Lee called it “weird to think about it."

Such is the delicate psychological dance between the world's best gymnasts and their sport. Lee has been competing under the international code for so long, she can't even fathom the idea of seeing a score flash that doesn't include being nitpicked to within an inch of its life.

It takes copious amounts of mental strength to thrive when nothing — from a technical standpoint anyway — is up to the ultimate standard, which puts it at odds with most other sports. Tom Brady can throw a 50-yard spiral for a touchdown. Steph Curry can swish a 3-pointer. Those moments don't exist in gymnastics.

Black believes the code of points makes up for it in other ways. The open-ended nature of the system allows for more creativity in putting together routines.

“That’s the part of it that’s kind of addicting,” said Black, who qualified for the Olympic all-around final before an ankle injury forced her to sit out. “There’s something new to try."

Besides, Black figures, "if you could just hit something perfectly, you’d probably lose some of that interest or motivation to keep going.”

So Black — just like every other gymnast on the planet — searches for tiny moments of bliss. The stuck dismount. The mastery of a new skill. The smooth connection from one element to another.

Still, the inner voice — the one that can feel the wobble or sense the imperfect hand placement — can be tough to turn off. American Chellsie Memmel won a world all-around title in 2005 and was part of the silver-medal winning U.S. team in Beijing in 2008.

Memmel retired and went into coaching and judging before beginning returning to training during the pandemic. Even as her skills returned, turning the “judge” switch off was difficult. She records every routine then does a video review with her father Andy, who also serves as her coach. She loves the immediate feedback on what's going right and what's going wrong while trying to make a point to not be too hard on herself.

“You have to give yourself some leeway and not beat yourself up about it,” said the 33-year-old Memmel, who competed at the U.S. championships in June. "You have to look at it like: ‘OK, that was fine, but where can I make those improvements? What needs to be fixed?’”

Even if the fixing can feel relentless. Biles has come closer than anyone to cracking the code.

During the second day of the 2015 U.S. gymnastics championships, the then-18-year-old's Amanar vault drew an audible “ooooh” throughout the arena when her feet suction-cupped to the mat on her dismount.

It looked perfect. It felt perfect. It wasn't. She received a 9.9-E score. Asked later whether she knows where the deduction might have come from, she shrugged and laughingly suggested her toes were crossed.

It's that same vault — a roundoff/back handspring onto the table followed by 2 1/2 twists — that Biles bailed on during the first rotation of team finals in Tokyo after getting lost in the air. Her availability for the rest of the Games is in question. She already has pulled out of the all-around, uneven bars, vault and floor exercise finals. Maybe she returns for one final bow during the beam final on Tuesday, though time is running out for her bout with “the twisties,” as she described them, to subside.

It's a phenomenon that occasionally plagues gymnasts regardless of skill level, even the greatest of all time. It also highlights the sport's own Sisyphean pursuit of an ultimate goal that can never be achieved.

Maybe that's not the point anyway.

A concept Biles, Lee and all the others who gathered in Tokyo have long understood. If they were consumed with perfection, they would have bailed years ago.

Go out there. Do you what you can as well as you can for as long as you can. The battle after all, isn't with the judges. It's with yourself.

“I usually don’t even try and think about the score,” Lee said. “Because that’s when I come out on top.”

And what could be more perfect than that?