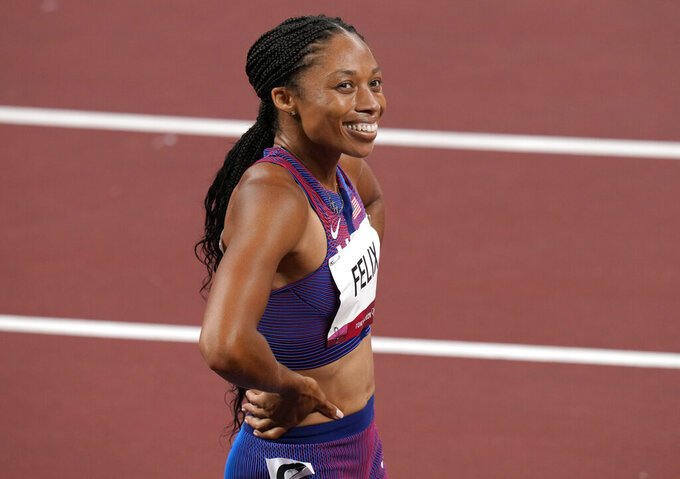 FILE - In this Aug. 6, 2021, file photo, Allyson Felix, of United States smiles after taking the bronze, in the final of women's 400-meters at the 2020 Summer Olympics, in Tokyo, Japan. (AP Photo/Francisco Seco, File)

TOKYO (AP) — The cauldron will be snuffed Sunday on the exhausting, enlightening, sometimes enraging 2020 Tokyo Olympics — held, actually, in 2021. These are the Games that were to be tolerated, not celebrated.

They will be both.

Imperfect but not impossible, these Olympics — willed into existence despite a pandemic that sparked worldwide skepticism and hard-wired opposition from Japan's own citizens — just might go down as the Games that changed sports for good.

It wasn't only those who stood on the medals stand at the hyper-scrutinized pressure cooker in Tokyo, where spit tests for COVID-19 and sleeping on cardboard-framed beds were part of the daily routine. It was all of them.

Their voices were heard, in big ways and small, through hundreds of reminders that their mental and physical health were not for sale, not even to the $15.5 billion behemoth that underwrites many of their grandest dreams.

Those voices were notably reflected in the words of Simone Biles, who, early on, reset the conversation when she pulled out of the gymnastics meet, declaring her well-being was more important than medals.

“It was something that was so out of my control. At end of the day, my mental and physical health is better than any medal," said Biles, who benched herself while battling “the twisties.”

And by Naomi Osaka, the tennis player who lit the cauldron on Day 1, but only after spending the summer insisting that the world listen to her — really listen — instead of only watching her on the court. The planet's highest-paid female athlete and the host country’s poster girl, she faced expectations that were hard to handle.

“I definitely feel like there was a lot of pressure for this,” said Osaka.

Hundreds of athletes found some way to use their voices in ways they hadn’t considered until the Tokyo Games — and the seismic 18 months that led up to it — all but commanded it.

They learned to talk about what it felt like to make sacrifices and accommodations for four years, then five, to come to the Games without friends and family, to put themselves out there, and to know they will be judged not on who they are but on how fast they run, how well they shoot, or whether they stick the landing.

“I’ve been afraid that my worth is tied to whether or not I win or lose,” Allyson Felix wrote the morning before her bronze-medal run in the 400 meters made her the most decorated female track athlete in Olympic history. “But right now I’ve decided to leave that fear behind. To understand that I am enough.”

They came in all shapes and sizes. A transgender weightlifter, a nonbinary skateboarder, and Quinn, the first openly transgender Olympian to win a gold medal. Teenage skateboarders, and surfers seeking gnarly waves — most of whom never dreamed of being on the Olympic stage, hugging and sharing tips and reminding us all that this is supposed to be fun.

They wove tales about sportsmanship: the high jumpers headed for a tension-filled tiebreaker for first, who stepped back and told a track official they should both win a gold.

And about advocacy: soccer players looking at a midday gold-medal game in the searing heat of the Olympic Stadium and deciding they deserved better.

The world's top tennis players demanding their matches be rescheduled, a request that went unheeded until Paula Badosa left the court in a wheelchair with heatstroke and Daniil Medvedev told the chair umpire, “I can finish the match but I can die. If I die, are you going to be responsible?”

And about mental health: During a teary post-race interview, sprinter Noah Lyles conceded he came as much to run as to spread the gospel that became the slogan of these fraught Games held during fraught times: It’s OK not to be OK.

And about gender equity and inclusion: The International Olympic Committee added five new sports and 18 new events for Tokyo to create an equal number of women and men for every sport, excluding baseball and softball. But when Britain's first female Black swimmer was denied use of a cap that fit her voluminous afro, the conversation on a lack of diversity in the pool became louder.

“I just want people to know that no matter your race or background, if you don’t know how to swim, get in and learn to swim,” Alice Dearing, co-founder of the Black Swimming Association, said after the women's open water marathon. “Don’t let anyone tell you it’s not for you.”

IOC president Thomas Bach said two days before the close that the Tokyo Games “far exceeded my personal expectations," because when spectators were barred as a pandemic precaution he feared "these Olympic Games could become an Olympic Games without soul.”

Instead, Bach said, he found the intimacy in the empty venues made for an intense atmosphere. “In many cases you did not realize that there were no spectators," he said. “Maybe in some cases you could even experience the feelings of the athletes closer and better than being surrounded by so many spectators.”

It is Bach’s job to call the Olympics a success. Maybe, though, that goal was met in Tokyo just by reaching the finish line. But of course there were highlights along the way.

— Italy shockingly establishing itself as a sprint power with a surprise win by Marcell Jacobs in the men's 100 meters followed by “four Ferraris” teaming to win the 4X100 relay for another gold medal.

— Lydia Jacoby, the first swimmer from Alaska in the Olympics won gold, and Caeleb Dressel collecting five golds in the pool.

— Sunisa Lee, the first Hmong American Olympian, winning gold in the women's all-around. And in these games where social media use soared and TikTok became the platform of choice for the Olympians, Lee blaming her bronze on the uneven bars from the distractions created by her new Internet fame.

— Streaming use surging among viewers, and NBC reporting that 3 billion minutes of content watched on its platforms were digital.

“I think the whole world will be quite happy that this event is going on in sports, in the times that we’re living in right now," said Alexander Zverev after winning gold in men's singles tennis for Germany in front of countryman Bach.

Though there were intermittent protests — a group of 10 or so outside the tennis final, loud enough that the players could hear and another small crowd outside Olympic Stadium during the opening ceremony and before track and field events — the Japanese did have reason to celebrate. The host nation set a goal to win 30 medals in Tokyo and nearly doubled that number with 58 when events concluded.

Outside the Olympic bubble, COVID-19 cases soared in Tokyo to daily record highs, although Bach exonerated the Olympics because 11,000 athletes were placed away from the population and regular testing for everyone else produced extremely low rates of positives.

The pandemic still rages, and the Beijing Winter Games are set to open a mere six months from now. And COVID-19 is just one of the issues facing the next scheduled Olympics — the IOC has rejected several recent demands to move the Games from China over allegations of human rights violations.

“Our responsibility is to deliver the Games,” said IOC spokesman Mark Adams. "It is the responsibility of others — the United Nations, who have been very supportive of the Olympic Games, and governments to deal with this — and not for us. The IOC has to remain neutral.”

The IOC did get involved when Belarus attempted to return sprinter Krystsina Tsimanouskaya to her country after she criticized coaches on social media. It helped intervene as she instead went to Poland with a humanitarian visa. Then it booted two Belarus coaches from the Olympics, their credentials revoked for their role in the Tsimanouskaya saga.

The Games, of course, will go on. They always do. Japan will hand the Summer Olympics flag to France on Sunday for the 2024 Paris Games. Tokyo organizers will end with a “Worlds We Share”-themed ceremony designed to make athletes and viewers “think about what the future holds" and “expresses the idea that each of us inhabits their own world.”

The athletes did that already in Tokyo, where the Olympics will be forever remembered as the Games that persevered.