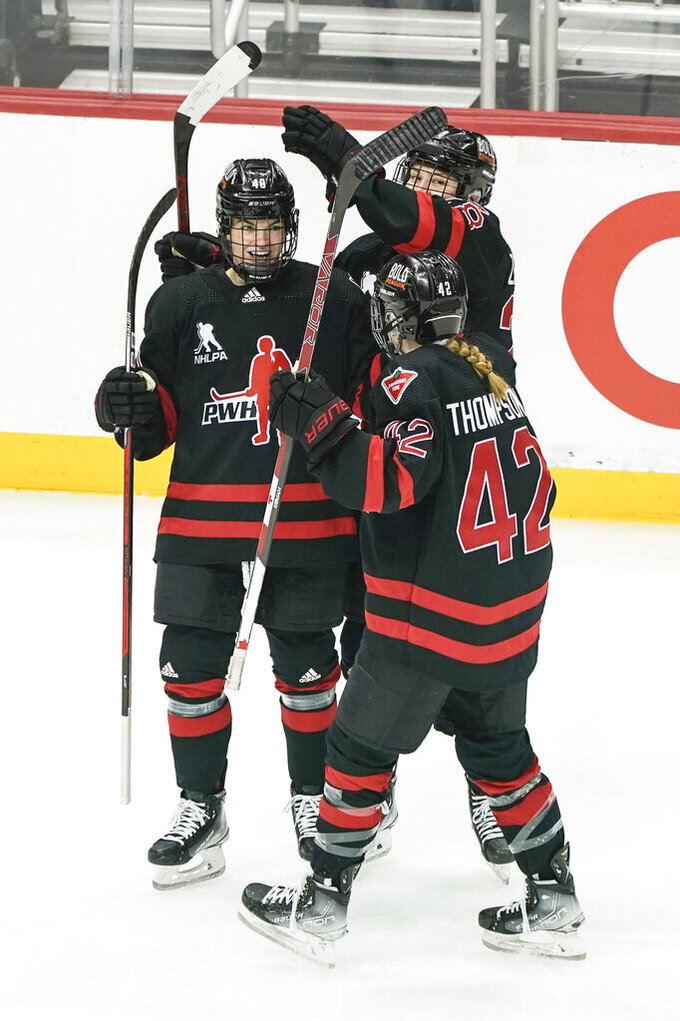 Canada's Blayre Turnbull, left, is congratulated by teammates Claire Thompson (42) and Micah Zander-Hart, right, after scoring against the United States during the first period of a women's exhibition hockey game billed as the "Rivalry Rematch", Saturday, March 12, 2022, in Pittsburgh. (AP Photo/Keith Srakocic)

PITTSBURGH (AP) — An Olympic gold medal wasn’t on the line this time for Marie-Philip Poulin, who added another clutch goal against the United States by scoring 2:13 into overtime in Canada’s 4-3 win in a “Rivalry Rematch” on Saturday.

Some three weeks after Poulin scored the final two goals in Canada’s 3-2 gold-medal win over the Americans at the Beijing Games, the aptly dubbed “Captain Clutch” was at it again. With teams playing three skaters aside, Poulin drove to the right post and had her centering pass deflect off U.S. defender Megan Keller and through the legs of goalie Nicole Hensley.

Hilary Knight, Hayley Scamurra and Hannah Brandt scored for the Americans in a game which represented more of a glimpse toward the future of the sport than its past.

The game was a showcase for the Professional Women’s Hockey Players’ Association at a time it is intensifying discussions with select NHL teams and corporate sponsors to launch a pro league within the next year.

With Penguins captain Sidney Crosby watching from a suite, the U.S. rallied from a pair of one-goal deficits and took a 3-2 lead on Scamurra’s goal at 7:46 of the third period. Canada responded 24 seconds later with Poulin setting up Rattray snapping in a shot from the right circle.

The game featured uneven rosters, with the Americans dressing just 14 skaters to the Canadians’ 17, and lacked the intensity of both meetings in Beijing, or even the two nations’ six pre-Olympic tuneups. An official attendance was not immediately available, though PWHPA officials said more than 5,000 tickets were sold through Friday night.

In many ways, the “Rivalry Rematch” represented much of what the top women’s players have been campaigning for since establishing the PWHPA three years ago. The exhibition game was organized by the PWHPA, played in an NHL building with the Penguins and the association’s numerous partners providing the infrastructure, monetary backing for travel and meal costs, and was broadcast nationally on both sides of the border.

“This is what we see when we look, I want to say 10 years down the line, but that’s not even the case. I think we could be playing in these arenas now, for sure,” Canadian forward Brianne Jenner told The Associated Press hours before puck drop. “I think our sport has gone through various iterations of professional leagues, and the product’s just got better and better and better. And I think we’ve outgrown where our sport is at.”

PWHPA chief Jayna Hefford confirmed that discussions have ramped up by saying: “We’re closer than we’ve ever been.” “There’s a lot of interest, a lot of conversations going on. I think teams, now more than an ever, are seeing how accretive it is to their business. It’s not about the right thing to do. It’s not anything other than this is good for our business and this is good for the business of hockey.”

The Penguins became the 11th NHL team added to the PWHPA’s list of partners.

The coaching staffs consisted of former Olympians with PWHPA chief Jayna Hefford and Cassie Campbell-Pascall behind the Canadian bench and newly hired Vancouver Canucks assistant GM Cammie Granato and Emily (Pfalzer) Matheson behind the U.S. bench. Matheson is married to Penguins defenseman Mike Matheson. ... The teams arrived on Friday and watched Pittsburgh’s 5-2 win over Vegas as Penguins guests from an arena suite. Players’ family members were also present after being unable to attend the Olympics or world championships in Calgary, Alberta, in August due to COVID-19 restrictions. ... After the game the Canadian team was scheduled to fly to Hamilton, Ontario, to attend the NHL’s Heritage Classic outdoor game between the Buffalo Sabres and Toronto Maple Leafs on Sunday.