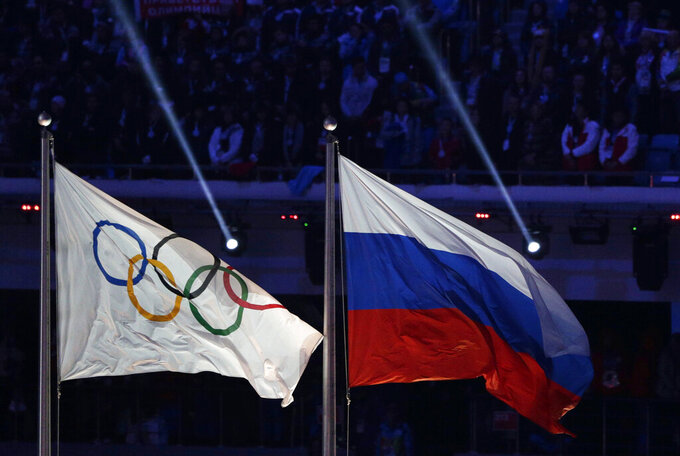 FILE - The Russian national flag, right, flies after it is hoisted next to the Olympic flag during the closing ceremony of the 2014 Winter Olympics in Sochi, Russia on Feb. 23, 2014. The International Olympic Committee has made a sweeping move to isolate and condemn Russia over the country’s invasion of Ukraine. (AP Photo/Matthias Schrader, File)

GENEVA (AP) — International sports bodies moved to further isolate Russia on Monday for its invasion of Ukraine and pushed Moscow closer to becoming a pariah on the playing field.

The IOC said it was needed to “protect the integrity of global sports competitions and for the safety of all the participants.”

The decision opened the way for FIFA, the governing body of soccer, to exclude Russia from the World Cup ahead of qualifying playoff on March 24. Poland already has refused to play the scheduled game against Russia.

It was unclear how the IOC’s request will affect Russian hockey players in the NHL and tennis players, including top-ranked Daniil Medvedev, in Grand Slam, ATP and WTA tournaments outside the authority of the International Tennis Federation.

World Rugby's executive committee banned Russia and Belarus from all international rugby and cross-border club rugby activities, saying it condemned “Russia’s aggressive invasion of Ukraine and the facilitation of this action by Belarus.”

FIFA was in talks with European soccer body UEFA on the details of suspending Russia's national and club teams, people with knowledge of the discussions told The Associated Press. They spoke on condition of anonymity to discuss private discussions before FIFA and UEFA decision-makers can ratify the ban later Monday.

With a direct impact on Russia playing World Cup qualifiers next month, FIFA already said Sunday it was talking to the IOC about excluding the country from competitions “should the situation not be improving rapidly.”

The IOC also went directly after President Vladimir Putin, who turned the 2014 Sochi Winter Olympics into a personal project. Putin's golden Olympic Order, which was awarded in 2001, has been withdrawn, the IOC said in a statement.

The Olympic body's call also applied to athletes and official from Belarus, which has abetted Russia's invasion by allowing its territory to be used to station troops and launch military attacks.

The IOC said it acted “with a heavy heart,” but noted that the impact of war on Ukrainian sports and athletes who cannot now take part in competitions outweighed the potential damage done to athletes from Russia and Belarus.

It was not a total blanket ban by the IOC, which also did not specifically suspend the national Olympic committees of Russia and Belarus.

Where exclusion was “not possible on short notice for organizational or legal reasons,” then teams from Russia and Belarus should compete as neutral athletes with no national flag, anthem or symbols, including at the upcoming Winter Paralympics in Beijing.

Russian Olympic committee leader Stanislav Pozdnyakov said in a statement “there is only one comment to make -- we categorically disagree,” adding it would help national federations to challenge “discriminatory rulings.”

Sports bodies across Europe already had moved against Russia on Monday by refusing to host or play against teams from the country.

Finland wants the Russian hockey team banned from the men’s world championships it will host in May, the Swiss soccer federation said its women’s team will not play Russia in July at the European Championship, and German soccer club Schalke said it had decided to end its longstanding partnership with Russian state-owned energy giant Gazprom.

Over the weekend, FIFA declined to ban Russia from the World Cup. Instead, it said the country's national team will have to compete under the name of its federation, the “Football Union of Russia” as punishment. Besides Poland, potential opponents Sweden and the Czech Republic have said they would refuse to take the field against Russia.

“The Swedish Football Association is disappointed with FIFA’s decision but is determined to continue to work together with other federations to cancel Russia’s matches in the upcoming World Cup qualifiers,” the body said Monday, citing the “illegal and deeply unjust invasion of Ukraine.”

The World Cup is scheduled to begin on Nov. 21 in Qatar.

In European club soccer, Russian team Spartak Moscow is still scheduled to play next week in the Europa League against German club Leipzig. UEFA allowed Spartak to take its place in the round of 16 draw on Friday, one day after Putin ordered the invasion to start.

UEFA called a meeting of its executive committee for later Monday and is expected to exclude Russian teams from its competitions based on the IOC announcement. The FIFA Bureau was set to only require the six regional confederation presidents to confirm the decision in writing.

The moves are not unprecedented. Following United Nations sanctions in 1992, FIFA and UEFA expelled Yugoslavia from its competitions when war broke out in the Balkans.

Besides Schalke’s effort to drop Gazprom as a partner, UEFA also is expected to see if it can nullify sponsorship deals with the company. Gazprom sponsors both the Champions League and the European Championship.

FIFA had tried to compromise Sunday by suggesting Russia play at neutral venues without its flag and anthem and under the Football Union of Russia name.

That aligns with sanctions imposed by the Court of Arbitration for Sport in December 2020 to punish Russia for state-backed doping and cover-ups of cheating, and applied at last year’s Tokyo Olympics and this year’s Winter Games in Beijing.

If Russia plays Poland as scheduled on March 24 and wins, the team would then face either Sweden or the Czech Republic on March 29.

Polish soccer federation president Cezary Kulesza said Sunday it was “totally unacceptable” that FIFA had not immediately expelled Russia from World Cup qualifying and said Poland is “not interested in participating in this game of appearances.”

Another future opponent, Albania, also said Sunday it would not play against Russia in any sports. Russia and Albania are scheduled to meet twice in June in the UEFA Nations League soccer tournament.

In hockey, the sport’s governing body has come under pressure from Finland and Switzerland to ban Russia and Belarus, both due to play at the world championships in May in Helsinki and Tampere.

Finnish Hockey Association chairman Harri Nummela said in a statement Monday it had talks with the Zurich-based IIHF to exclude the two countries from the sport internationally. ___