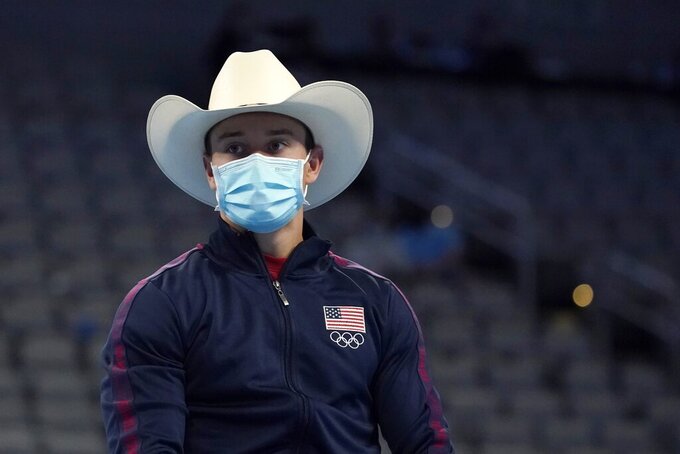 FILE - Brody Malone wears a cowboy hat and poses for photos after winning the men's all-around at the U.S. Gymnastics Championships in Fort Worth, Texas, in this Saturday, June 5, 2021, file photo. The 21-year-old Malone will make his Olympic debut in Tokyo later this month. (AP Photo/Tony Gutierrez, File)

Brody Malone insists there is nothing special about his origin story. His parents signed him up for gymnastics when he was 3 because he couldn't — or more to the point, wouldn't — sit still.

“Typical,” Malone said in the soft southern twang that betrays his Tennessee and Georgia roots.

That may be the only typical thing about the 21-year-old newly minted national champion who will head to Tokyo later this month as the standard-bearer for the U.S. men's team.

Malone is a rodeo-riding, frog-gigging son of the South. And yeah, he knows he might be the only person in the history of the Stanford men's program to ask coach Thom Gliemi for a good place to hunt in the northern California woods.

“I don't think he gave me much,” Malone said with a laugh.

Hard to blame Gliemi, though he is quick to point out what looks like an unusual marriage between school and athlete on the surface is more of a testament to the lengths Malone will go to challenge himself.

Sure, there were programs that might have seemed like a better fit for someone who grew up in tiny Summerville, Georgia, about 90 minutes northwest of Atlanta. Malone instead opted for the one 2,300 miles away geographically and, well, maybe far more than that culturally.

JD Malone is the one who threw Stanford out as a possibility to the oldest of his four children, pointing out the school's combination of both academic and athletic excellence. So Malone — who popped up on Gliemi's radar after winning the junior national title in 2017 — applied. When the acceptance letter came, the pragmatist in him shouted down any concerns about the unknown that awaited.

And Malone, who is majoring in management science and engineering, is nothing if not practical. Relentless, too. Gliemi describes him as a “lunch-pail” athlete whose teammates voted him as the squad's hardest worker this season while winning his second NCAA all-around title and leading the Cardinal to a national championship in April.

It marked the start of a run that's thrust Malone into the spotlight, whether he likes it or not. He was so dominant at the U.S. Olympic Trials — an event he won by a staggering three points in a sport where mere tenths often separate success and failure — that men's high-performance director Brett McClure proclaimed “What a stud!” in the aftermath.

Malone isn't buying into his own hype. It's not false modesty. He chose gymnastics over baseball when he was around 12 — a gut feeling he called “God's way” — but kept it largely to himself. Ask Malone if his classmates at Trion High School (enrollment 400) knew about how quickly he was climbing up the ranks, he shrugs.

“I didn’t really talk too too much about it,” he said. "I think I did a pep rally one time. It was Olympic-themed. And they were like, 'Oh you’re a gymnast, do some backflips.”

So he did. And then quietly went about the rest of his business. It's what Malone does. Life hasn't given him much choice. He lost his mother Tracy to cancer in 2012. His stepmother Lynn Johnson died in 2019 after suffering a brain aneurysm.

A lesson that keeps reinforcing itself as Malone's star has risen. He was on his way to ending three-time Olympian Sam Mikulak's long reign as the top American men's gymnast in early June when pictures of Malone and his Stanford teammates posing at the White House to celebrate their 2019 national championship began to circulate on social media.

In one of the shots, Malone is standing in the middle of the second row sporting a tie in support of then-president Donald Trump. In another, Trump, Malone and the rest of the Cardinals share a laugh while Trump breaks out a Sharpie to sign it.

The level of the vitriol surprised him. One Twitter user hoped he'd fall on the pommel horse. Another wished Malone would shred his knee on a dismount. All for wearing a tie in pictures that — as Gliemi points out — included young men from various racial, cultural and political backgrounds.

“It’s not like I was trying to hide it,” Malone said. “I guess when that came out, I expected there would be hate about it. People have their opinions, there’s nothing wrong with that.”

Malone is here to listen more than he's here to talk. When social issues he's not well-versed in arise, he reaches out to teammates and coaches for insight. He's not the same person he was when he arrived on campus in 2018.

“I think it would be hard not to change,” Malone said. "Stanford is a very inclusive environment. The Bay Area is definitely a different place. I’ve constantly been open to learning about other people’s experiences in the world and stuff. Definitely, my eyes have been opened for sure.”

Yet Gliemi shies away from the idea that Malone was lost during those first few months in the program.

“I don’t think it necessarily was a shock,” Gliemi said. "Definitely like, ‘Oh, this is how different parts of the world and the country are.’ But he’s got such a strong base, he’s just as solid, solid kid. Humble and respectful and generous and accepting. I think his transition was easier than some other guys.”

If he's being honest, Malone still isn't comfortable with the attention he's receiving. If he had his way, he'd just go to the gym and put in the work. Yet the landscape around him is shifting. When the NCAA relaxed the rules to allow athletes to be compensated for their name, image and likeness, Malone struck a deal to become a spokesperson and minority stakeholder for Endless Rope, a product he used while working out in Texas last fall while the gyms in California were shuttered.

It's not an opportunity he remembers seeking out. Yet it's one he jumped on after being approached. Yes, he's aware that the increased attention will force him get out of his comfort zone a bit and talk more than he'd like.

In that way, maybe his days roping horses with younger brother Cooper set him up for the long road ahead.

“In rodeo, no matter what, you have to be ready to go,” he said. “You have to be in the right mindset. There’s a lot of moving parts. ... It's the same in gymnastics. You've just got to have that competitor's mindset and be able to perform when you have to."