Off-script Olympics: Wins, losses, and a whole lot of improv 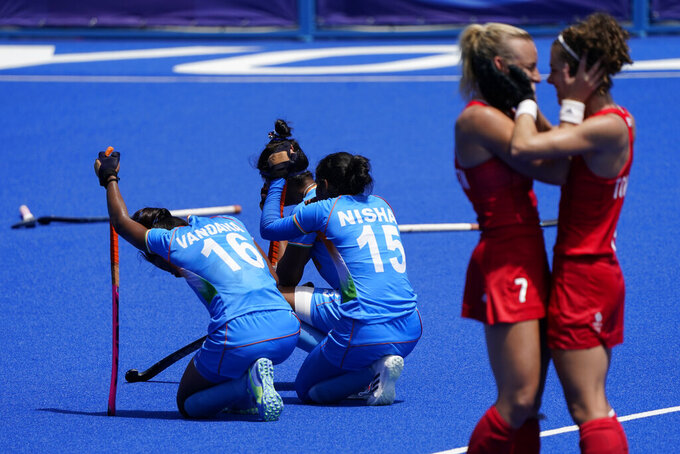 TOKYO (AP) — Every two years, when an Olympics convenes, its organizers harness billions of dollars to make sure the entire affair is tightly, carefully scripted, clearing the way for one realm — and one realm only — to be genuinely unpredictable: the athletes' performances and, by extension, the results of the events in which they compete.

It never quite works out that way, of course. Be it drugging or diplomatic incidents, bad behavior or political upheaval, the event rarely unfurls in exactly the way the International Olympic Committee so fervently hopes. But even viewed through that prism, this Pandemic Olympics has been the most off-script Games in history.

“This isn’t a story that fits our society’s desire to have complete historical context by the time we refresh our phones,” NBC’s Mike Tirico said a week into Japan's fourth Olympic Games.

It was delayed by a devastating pandemic for an entire year, to the point where they're still referring to an Olympics held in 2021 as the “2020 Tokyo Games” — another nod to powerful scripts that resist overturning. Cascading resignations — due to everything from financial corruption to bullying to sexual harassment — plagued the organizing committee.

Three of the world's best-known athletes — Simone Biles, Naomi Osaka and Novak Djokovic — didn't end up doing anywhere near what they were expected to do in Tokyo, and the ensuing (and productive) conversation about emotional health, mental pressure and learning how to take care of one's self suffused the rest of the Games.

If the Olympics is, as they like to say, one of the planet's biggest stages, there was a lot of improv going on.

It was jarring, and understandably so, even beyond the spectatorless stands. The sharply drawn narrative of winners and losers has fueled Olympic storytelling for generations — either-or storylines only occasionally interrupted by eruptions and controversies. But this time around, the storylines seemed both more subtle and a lot more disruptive.

That perhaps says less about the Olympics than it does about the times in which we live — a confusing, complex, intricate era that resists easy solutions as much as it is filled with people who want to impose them.

Consider the United States, a key Olympic player that has trended toward binary thinking for most of its history. For Americans, sometimes to their detriment, things historically often come down to black or white, yes or no, winners or losers. There’s often a strong aversion to seeing and discussing shades of grey.

Most American big-media storylines follow that sensibility — particularly when it comes to the sharply drawn coverage of an Olympic Games, which sometimes can resemble a bustling factory for churning out heroes.

That expectation for hero-making is revealed in this endearing remark from U.S. athlete Isaiah Jewett, who picked up Botswana's Nijel Amos after they both fell in the semifinals of the men's 800-meter. “All the superhero anime that I watch," Jewett said, "regardless of how mad you are, you have to be a hero at the end of the day.”

And for what he did, he became one. But what he said also reflected that American and Olympic commitment that sharp, epic endings represent the best and most memorable outcomes. So when something like these Olympics – and, frankly, this era in general – comes hurtling at people weaned on binary storytelling, things can get confusing.

Look at NBC, where surely producers were asking some form of this question: How do you deploy a half-century-old architecture of telling network-television sports stories that’s built for winners and losers and use it for a more subtle set of storylines like mental health and coronavirus fear that don't necessarily have distinct outcomes?

Nuance doesn't necessarily equal viewership. In general, the prevailing sentiment runs more toward what 13-year-old Japanese skateboarder Momiji Nishiya said after getting her gold: “I want to be the famous one who everyone in the world knows."

If you look at what went off the scripted rails at these Games, though, it's only fair to look at what stayed on book as well. After all, managerial success is measured — or should be — not only by what happens but by what doesn’t. And even within this jumbled valley of Olympic unpredictability, it's worth noting where the script endured.

There has been no major outbreak of COVID within the Olympic bubble, which was organizers' greatest fear. In fact, since July 1, barely more than 400 Olympic-related COVID cases have been documented out of tens of thousands of tests — even as the country around the Games declared increasingly wide states of emergency to offset alarming spikes in virus numbers.

The one political eruption — the defection-like flight of Belarus sprinter Krystsina Tsimanouskaya to Vienna, then Poland, when she felt she was under threat — was less disarray and more sharp thinking on behalf of Japanese authorities, who interceded when officials from the country's Olympic committee tried to hustle her on a plane home.

And in the conversation about mental health that emerged after Biles' winding Olympic road, the IOC not only tolerated but even fostered further scrutiny of the issue, part of what cleared the way for athletes to come forward and make the intricate and deeply personal topic an indelible part of the Tokyo 2020 script.

For Tokyo in mid-2021, maybe “Tokyo 2020” was, in fact, the pitch-perfect moniker. Because these were, in the end, a Games that, if they didn't follow the Olympics' script, followed 2020's perfectly — fear and disease and suspicion all around, curveballs galore, unimaginable obstacles to overcome.

And, just like the storyline of 2020, lots of good stuff between it all that managed to shine through. A modern Hollywood ending, if you will.