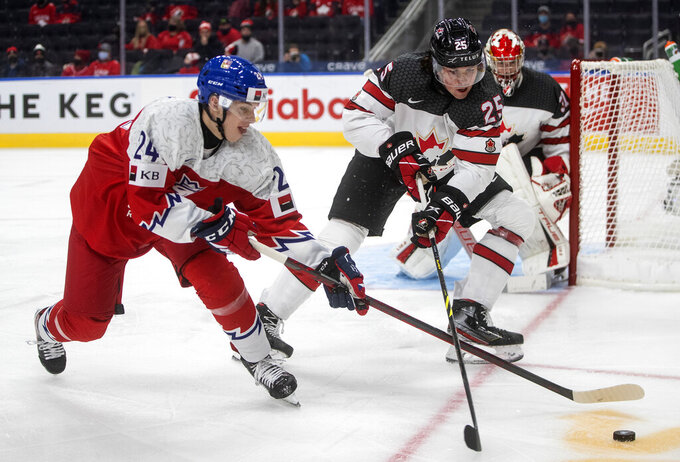 Canada is set to have a 37-year-old veteran of almost 1,400 NHL games, a top draft pick and a college goaltender front and center at the Beijing Olympics.

“We’ve got a mix of some young guys, we’ve got some guys in their mid-20s and we’ve got some older guys,” general manager Shane Doan said on a video call. “That youthful enthusiasm that shows up in the young guys early on in a season, in any season you play in, is always fascinating to watch and without a doubt it’s noticeable. But you also notice those older veteran guys in the playoffs: those guys that have that energy in the playoffs when the games are on the line that have that little extra boost because they’ve been part of the game for a long time.”

No one playing in this Olympic men's hockey tournament has been around as long as Staal, who won the Stanley Cup in 2006 with the Carolina Hurricanes and a gold medal on home ice at the 2010 Vancouver Games. He played in the NHL as recently as last season with the Montreal Canadiens, who reached the Cup Final.

“This opportunity was something that is too good to pass up,” Staal said. “I’m looking forward to this chance to represent our country and go for a gold medal.”

Power is one of four players on the team under the age of 23 along with goaltender Devon Levi and forwards Mason McTavish and Jack McBain. The big defenseman from the University of Michigan was drafted by the Buffalo Sabres and could be playing for them as soon as later this season.

Levi, who leads all college goalies with a .948 save percentage and nine shutouts and ranks fifth in the nation with a 1.55 goals-against average, is expected to be Canada’s starter in net with former NHL goalie Devan Dubnyk surprisingly left off the 25-man roster. The 20-year-old is also a Buffalo prospect after being dealt there from Florida in the Sam Reinhart trade last summer.

“What he’s done this year in college is pretty remarkable,” Sabres GM Kevyn Adams said. “ It’s not surprising for us, I guess, to see how rapidly he’s improving, but I just think this is a young player put in an opportunity on the world stage to have a great experience.”

McTavish is the team's youngest player at 18 and was the No. 3 pick in the 2021 draft by Anaheim. He recorded three points in nine games with the Ducks this season before getting sent back to the Ontario Hockey League.

Canada did not skew as young as the U.S., which has 11 players under the age of 23. Russia, Finland and other medal contenders went with mostly veteran rosters and stayed away from players in their early 20s.

Among the other Canada players with NHL experience are defenseman Jason Demers and forwards Daniel Winnik, David Desharnais and Josh Ho-Sang. Ho-Sang played 51 games with the New York Islanders and is now in the American Hockey League with Toronto.

“He’s a guy that obviously has an incredible amount of skill and somebody that can get around the ice,” Doan said. “I’ve talked to a few of his GMs in the last couple years, and his maturity and the way that he’s grown as a person, they all rave about him.”

Canada is looking to win men’s hockey gold for the third time in the past four Olympics. Eric O’Dell, Maxim Noreau and Mat Robinson are back from the 2018 team that left with bronze when the NHL also did not participate.

“We are going there to win a gold medal,” Hockey Canada president Tom Renney said. “That is our job.”