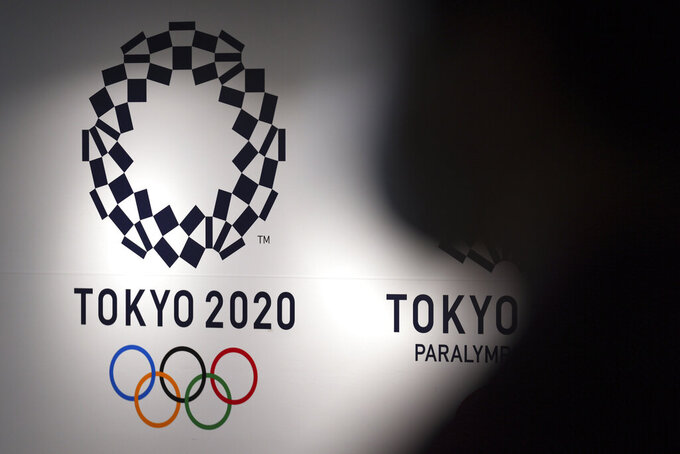 FILE - A person walks near Tokyo 2020 logo in Haneda Airport on June 14, 2021, in Tokyo. Tokyo Olympic officials, meeting Tuesday, June 21, 2022, before the body is dissolved at the end of the month, were to detail the final numbers that were driven up by the pandemic, but were in record range even before that. (AP Photo/Eugene Hoshiko, File)

TOKYO (AP) — The final price tag for last year's COVID-delayed Tokyo Olympics was put at $13 billion (1.4 trillion Japanese yen), the organizing committee said Tuesday in its final act before it is dissolved at the end of the month.

The cost was twice what was forecast in 2013 when Tokyo was awarded the Games. However, the final price tag presented by organizers is lower than the $15.4 billion they predicted when the Olympics ended just under 11 months ago.

“We made an estimate, and the estimate has gone down lower than we expected,” Tokyo organizing committee CEO Toshiro Muto said, speaking through an interpreter at a news conference. “As a total amount, whether this is huge or not — when it comes to that kind of talk it is not easy to evaluate.”

Accurately tracking Olympic costs — who pays, who benefits, and what are and are not Games’ expenses — is an ever-moving maze. The one-year delay added to the difficulty, as did recent fluctuations in the exchange rate between the U.S. dollar and the Japanese yen.

Victor Matheson, a sports economist at the College of the Holy Cross who has written extensively on the Olympics, suggested by email to AP that most of “the expenses and revenues are in yen, so the exchange rate changing the dollar amounts doesn’t affect how the event ‘feels’ to the organizers.”

Matheson and fellow American Robert Baade researched Olympic costs and benefits in a study called “Going for Gold: The Economics of the Olympics.” They wrote that “the overwhelming conclusion is that in most cases the Olympics are a money-losing proposition for host cities; they result in positive net benefits only under very specific and unusual circumstances.”

Muto said there were savings because of the absence of fans, which cut down on security costs and venue maintenance costs. He talked vaguely about “squeezing” costs and “simplifying” operations to reach the reductions.

However, organizers lost at least $800 million in income from ticket sales because fans were banned due to COVID. Muto called “baseless” reports before and after the postponement that costs might hit $25 billion.

There is one undeniable fact: Japanese government entities, primarily the Tokyo Metropolitan Government, covered about 55% of the total expenses. This amounted to about $7.1 billion in Japanese taxpayer money.

The privately funded organizing committee budget covered about $5.9 billion. The International Olympic Committee contributed $1.3 billion to this budget, with the largest contribution of $3.4 billion coming from local sponsors. Organizers also listed $500 million in income from an unspecified “insurance payout.”

A University of Oxford study in 2020 said Tokyo was the most expensive Olympics on record.

In the several years prior to the Olympics, government audits found official costs might have been much more than stated.

It’s impossible to assess the long-term impact of the Tokyo Olympics, particularly in a sprawling city like the Japanese capital where change is constant. The pandemic erased any short-term tourism bounce. Local sponsors, who paid $3.4 billion to be linked to the Olympics, didn’t seem very happy according to local reports.

Dentsu Inc., the giant Japanese advertising and public relations company, may have benefited. It directed marketing for Tokyo 2020, received commissions for lining up sponsors, and has been linked to an IOC vote-buying scandal that was tied to Tokyo getting the Games.

The scandal forced the resignation of Tsunekazu Takeda in 2019, an IOC member who also headed the Japanese Olympic Committee. He denied any wrongdoing.

The Games were hit with other scandals, including the resignation of Yoshiro Mori, the president of the organizing committee who made sexist remarks about women. The former Japanese prime minister stepped down five months before the Games opened.

“I was baffled, surprised — it was so unexpected,” Muto said when asked about Mori's departure. “I really had a tough time dealing with the situation.”

Tokyo had billed itself as a “safe pair of hands” in its bid in 2013 to get the Games.

Tokyo will also be remembered as the first Games that were postponed for a year, and then held mostly without fans in a so-called bubble.

The most important legacy is surely the $1.4 billion National Stadium designed by Japanese architect Kengo Kuma. Though it's a new venue, it blends seamlessly into its central location.

“The goal should be that the costs of hosting are matched by benefits that are shared in a way to include ordinary citizens who fund the event through their tax dollars,” Matheson and Baade wrote. “In the current arrangement, it is often far easier for the athletes to achieve gold than it is for the hosts.”