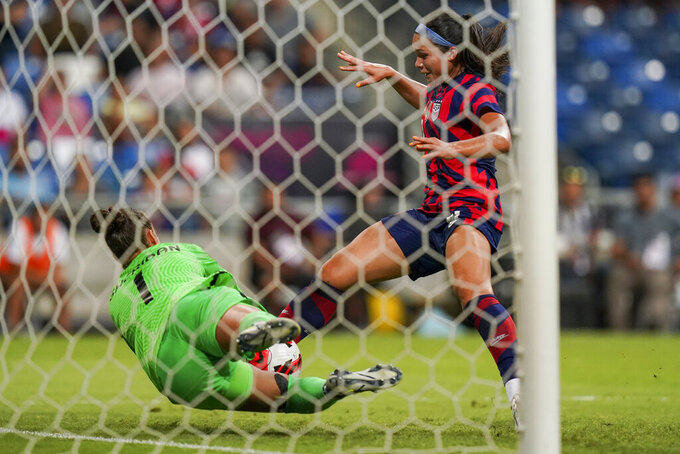 MONTERREY, Mexico (AP) — Alex Morgan never gets tired of winning championships, even after so many titles already.

Morgan converted on a penalty in the 78th minute and the U.S. women's national team won the CONCACAF W Championship 1-0 over Canada on Monday night to secure one of the region's spots in the 2024 Olympics.

“It just always feels good to be called the champion, and this game just, like, means a lot to us. It’s always going to mean a lot," Morgan said. ”Obviously against Canada, they gave us a run for our money, but we prevailed and feel good about the performance."

As FIFA President Gianni Infantino watched from a private box, the United States finally broke a stalemate when Rose Lavelle was fouled in the box and Morgan fooled Canadian goalkeeper Kailen Sheridan on the penalty. It was Morgan's 118th overall career goal.

“Alex is a big player, and big players are born for big moments,” U.S. coach Vlatko Andonovski said. “And that’s what makes her special.”

The four semifinalists all earlier earned spots in the 2023 World Cup next summer in Australia and New Zealand. Runner-up Canada will play Jamaica in a playoff for the region’s other Olympic bid in September 2023.

The United States is now 33-0 in World Cup or Olympic qualifying matches since losing to Mexico 2-1 in advance of the 2011 World Cup.

The game was a rematch of the Olympic semifinal a year ago in Tokyo. Canada edged the United States 1-0 on a late penalty kick to advance to the final, its first victory over the Americans in 20 years.

The Canadians went on to win the gold medal on a penalty shootout with Sweden. The U.S. team finished with the bronze.

Alyssa Naeher was in goal for the United States instead of Casey Murphy, who started the last game at the tournament. Defender Emily Fox also returned to the lineup from COVID-19 protocol.

The United States has changed since the Olympics, and Morgan is now one of the older players on the roster surrounded by up-and-coming talent like forward Sophia Smith and Mallory Pugh.

But the team has clearly benefitted from the steady veteran presence of Morgan, Megan Rapinoe and Becky Sauerbrunn. All three are veterans of two World Cup titles and know what it takes to perform on the big stage.

Temperatures hovered in the low 90s at the start of the match at Estadio BBVA. Sheridan had a big save in the 31st minute when Pugh made a break down the right side and took a hard shot at the goal.

She made another in the 45th, with an assist from teammate Kadeisha Buchanan, on Smith's scramble to score at the goal line. Smith had another chance in the 64th, but it went wide.

Canada had a flurry of late opportunities, including a header from Jordyn Huitema that went wide.

“I think what I was most pleased with is, after you get that penalty call, the bounce back from the group after that, they showed that they were willing to do anything to get the result back. So we gave it everything and that’s all you can ask,” Canada coach Bev Priestman said.

Kalyssa van Zanten scored in the 102nd minute to give Jamaica the edge in the earlier game. Van Zanten, who plays for Notre Dame, came into the game as a substitute in the 99th minute and scored on a well-placed pass from Drew Spence.

“I talked to her before she goes in and told her there's a goal in those boot and she nodded to me and it gave her some confidence,” said Jamaica coach Lorne Donaldson, who just took over the Reggae Girlz early last month amid upheaval.

Costa Rica had perhaps the best opportunity in the first half when Melissa Herrera faced Jamaica goalkeeper Rebecca Spencer alone, but her shot when wide left.

Rocky Rodriguez, who plays for the Portland Thorns in the National Women's Soccer League, hit the post with a shot in stoppage time, and the game went to overtime.

Costa Rica fell to the United States 3-0 in the semifinals, while Jamaica lost to Canada 3-0. Jamaica and Costa Rica have each been to the World Cup once before.

The United States has been to every World Cup since the tournament started in 1991. The Americans have four titles, including the last two in 2015 and 2019.