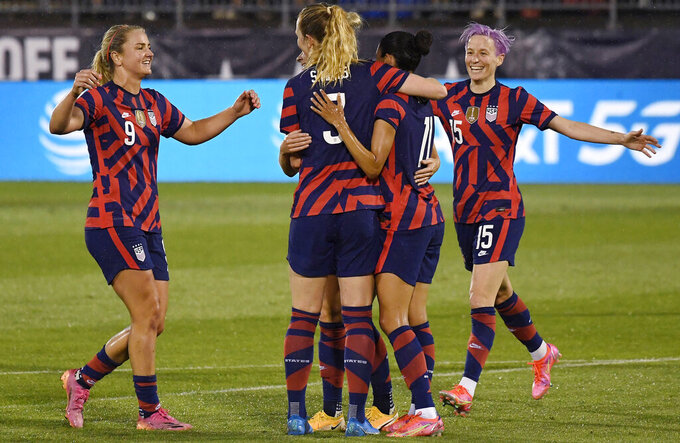 United States' Samantha Mewis (3) celebrates her goal with her teammates during the first half of an international friendly soccer match against Mexico, Thursday, July 1, 2021, in East Hartford, Conn. (AP Photo/Jessica Hill)

TOKYO (AP) — The U.S. women's national soccer team is in a bubble of its own making for the Tokyo Olympics, and it's not just because of coronavirus restrictions.

The World Cup champions have become adept at shutting out all the outside noise — the seemingly endless social media debates, the TV punditry and even the trash talk that comes with being the best in the world.

“I think, especially the players that have been through these major tournaments, you figure out how to stay in the best mental headspace and sometimes that’s compartmentalizing, that’s focusing on one thing at a time and trying not to let the noise get into what we like to call the bubble,” defender Becky Sauerbrunn said. “So like, secure the bubble, protect the bubble.”

The women's Olympic soccer tournament starts on Wednesday. The United States, the top-ranked team in the world and the favorite to win, opens against Sweden at Tokyo Stadium.

The Americans are vying for their fifth gold medal, more than any other national team. They can also become the first women to win an Olympic gold following a World Cup title.

There's reason to believe they'll do just that. The group is undefeated in 44 straight games, the second-longest unbeaten streak in team history. It's a deep squad with a formidable attack: Seventeen of the players were on the World Cup squad.

Christen Press has been directly involved in 37 goals in her last 37 matches, with 16 goals and 18 assists. Megan Rapinoe, the unabashedly outspoken winger with purple hair, leads the team with seven goals this year.

Quietly holding down the defense is goalkeeper Alyssa Naeher, who has six shutouts in nine starts this year.

Naeher is perhaps the leader on the team when it comes to shutting out the noise. She eschewed all social media during the team's run in France two years ago, and often worked on crossword puzzles before matches to chill out before games.

“Everything’s all about compartmentalizing,” the softspoken Naeher said.

Of course, it will likely be a bit easier to stay focused at this tournament. Japan is in a state of emergency because of rising coronavirus cases. As a result, the athletes participating will be in their own team or individual bubbles with strict COVID-19 protocols. And no fans will be allowed.

“It's not the best setup in terms of being able to go for a walk or just get outside, go grab a coffee that sort of thing. That’s not available to us," defender Kelley O'Hara said. "But at the end of the day we’ve all been doing it for a month now with national team, so it’s the reality of the tournament, of the situation, of the Olympics this year. You just kind of take it in stride and make do with what you can.”

The United States had a pre-tournament camp in Miyazaki before arriving in Tokyo on Friday in preparation for Sweden, the team that knocked the Americans out of the 2016 Olympics in the quarterfinals.

Australia plays New Zealand in the second match of the night at Tokyo Stadium. Twelve women's teams are divided into three groups for the tournament, which is being played at six stadiums across the country.

There are a pair of Wednesday matches at the Sapporo Dome: Britain plays Chile and host Japan play Canada. Additionally, China plays Brazil and Zambia plays the Netherlands at Miyagi Stadium.

As captain of the United States, Sauerbrunn is tasked with keeping her side focused.

“It’s a skill that I think everyone needs to learn, especially in these major tournaments, because they’re not easy,” Sauerbrunn said about compartmentalizing. “There’s a lot of stress, there’s a lot of noise and so learning to knock that out, block that out, is really important.”