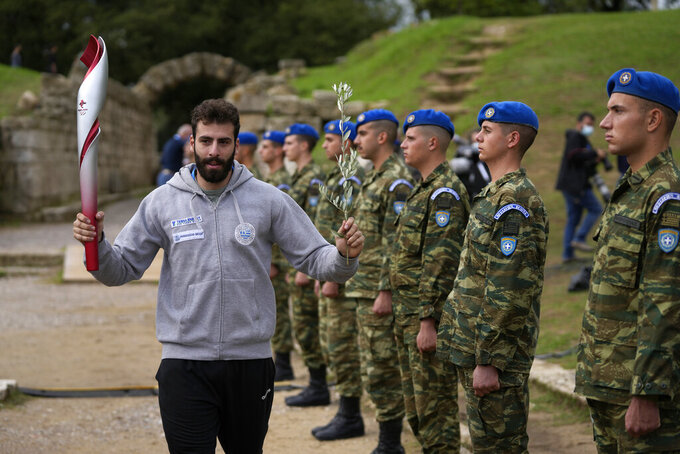 Skier Ioannis Antoniou, the first torch bearer, holds an olive branch during the final rehearsal for the lighting of the Olympic flame at Ancient Olympia site, birthplace of the ancient Olympics in southwestern Greece, Sunday, Oct. 17, 2021. The flame will be transported by torch relay to Beijing, China, which will host the Feb. 4-20, 2022 Winter Olympics. (AP Photo/Thanassis Stavrakis)

ANCIENT OLYMPIA, Greece (AP) — A sunburst at the overcast birthplace of the ancient Olympic Games in Greece was too short-lived to light the backup flame for the Beijing 2022 Winter Olympics at Sunday’s dress rehearsal.

It was the second blip of the day, after two protesters were detained on the Acropolis in Athens trying to raise a banner to draw attention to human-rights abuses in China.

There has been widespread international criticism of China’s treatment of Uyghur Muslims in the northwest region of Xinjiang, as well as its crackdown on protesters in Hong Kong and its policies toward Tibet and Taiwan.

But the International Olympic Committee has shied away from the issue, saying it’s out of its remit.

The question of the weather over Olympia is simpler. Greek organizers have another backup flame lit in advance if the traditional way, using a bowl-shaped mirror to focus the sun’s rays on a torch, fails again due to clouds disrupting the ceremony on Monday.

Health measures for the second pandemic flame-lighting at Ancient Olympia, in the southern Peloponnese region, mean that much of the normal pageantry is being trimmed back. There will be no spectators Monday, and only three runners will take part in a symbolic relay that would normally have lasted days.

The first torchbearer, Greek alpine ski racer Ioannis Antoniou, said his part in the ceremony is “one of the greatest honors an athlete can have.”

“And much more as it’s the Olympics that I’m trying to qualify for,” he added.

Sunday’s dress rehearsal didn’t even have the costumes, for fear of them getting soaked by rain. Instead, young actresses and dancers playing the part of pagan priestesses went through their routine looking incongruous in sportswear and sandals, to save their flowing tunics for Monday when better weather is forecast.

The flame will be taken to Athens and handed over to Beijing organizers on Tuesday at the renovated ancient stadium where the first modern Olympics were held in 1896.

Earlier Sunday, two activists attempted to hang a banner from the scaffolding on the Acropolis before being detained. Human rights activists had also staged protests during the flame-lighting ceremony for the 2008 Beijing Summer Games, and disrupted the international torch relay.

A security officer took the banner away, but the activists remained on the scaffolding and deployed a Tibetan flag and a smaller banner proclaiming, “Free Hong Kong Revolution.” They also chanted slogans including “Free Tibet,” “Boycott Beijing 2022” and “No freedom, no Games,” before police arrived and detained them.

Protests are not allowed on the Acropolis — which has not stopped several from being held over the years by groups ranging from Communist unionists to soccer fans.

The Beijing Winter Games will run from Feb. 4-20. Only spectators from mainland China will be allowed to attend. Everyone at the Olympics — including athletes — will be expected to be vaccinated, or else have to spend 21 days in quarantine.

Demetris Nellas in Athens and Srdjan Nedeljkovic in Ancient Olympia contributed to this report.