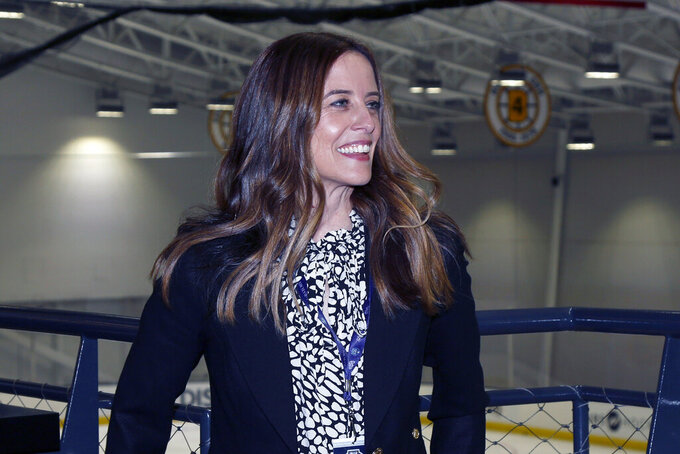 FILE - NWHL interim Commissioner Tyler Tumminia poses for a photo before a WNHL playoff hockey playoff game in Boston, Friday, March 26, 2021. The Premier Hockey Federation is more than doubling each teams’ salary cap to $750,000 and adding two expansion franchises next season in a bid to capitalize on the wave of attention women’s hockey traditionally enjoys following the Winter Olympics. “It’s an amazing investment by the ownership, and it really reaffirms the strength of their commitment to being a difference-maker in women’s hockey,” PHF Commissioner Ty Tumminia told The Associated Press.(AP Photo/Mary Schwalm, File)

The Premier Hockey Federation is more than doubling each teams’ salary cap to $750,000 and adding two expansion franchises next season in a bid to capitalize on the wave of attention women’s hockey traditionally enjoys following the Winter Olympics.

The PHF’s announcement on Tuesday of its board of governors’ commitment to invest more than $25 million over the next three years is also considered a major step in attempting to thaw its relationship with United States and Canadian national team players, who have balked at joining North America’s lone professional women’s hockey league.

“It’s an amazing investment by the ownership, and it really reaffirms the strength of their commitment to being a difference-maker in women’s hockey,” PHF Commissioner Ty Tumminia told The Associated Press.

“It’s important for us to advance to our next season and be crystal clear about the direction we’re headed, and what framework will be so that all athletes can make an informed decision about their careers,” Tumminia added, noting the timing of the announcement comes two weeks before the Winter Games open in Beijing.

The six-team PHF is moving forward with plans to establish a team in Montreal and, without disclosing where, adding another expansion franchise in the United States.

The boost in the cap from $300,000 this season will lead to an average salary of $37,500 based on a 20-player minimum roster or $30,000 for a league-maximum 25-player roster. There will be no limits placed on a player’s salary as long as the team’s overall payroll remains under the cap.

The cash influx will also lead to the PHF providing full health-care benefits to its players, improving facilities and increasing the number of practices. Players will also gain a 10% equity in their respective team and have control over their likeness for marketing opportunities.

“This is the time to double-down,” PHF board of governors chairman John Boynton said. “We think this is a giant step forward of making it possible for the best women’s hockey players to earn a living playing the game they love.”

The league doubled its salary cap already from $150,000 a year ago, while also adding an expansion team in Toronto.

The PHF has made numerous sponsorship and broadcasting inroads over the past year, including having games aired on ESPN-Plus in the U.S. and Canada’s TSN.

Tumminia noted the league was able to generate those agreements based on this being an Olympic year.

“This is a very pivotal time in women's hockey. There's no denying the impact the Olympics have on the interest in the women's game and how the the landscape can change after Beijing,” she said.

The fast-tracked approach follows two years in which the PHF overhauled its business and ownership model, and underwent a rebranding by changing its name from the National Women’s Hockey League last summer.

PHF teams are now privately owned, though some ownership groups control more than one franchise.

Upon being founded as a start-up four-team venture in 2015 by Dani Rylan Kearny, the league previously controlled all its franchises and relied on outside investors to make up the revenue gap from ticket and merchandise sales to pay for salary, travel and administrative costs.

The instability of the business model led to the NWHL slashing players salaries by more than half in its second season. The move led to a distrust among players, some of whom bolted to play for the Canadian Women’s Hockey League, which folded in May 2019.

The CWHL’s demise led to the world’s top players forming the Professional Women’s Hockey Players’ Association in a united bid to establish a single North American professional league — ideally backed by the NHL — with a long-term sustainable economic model.

The PWHPA has spent the past two years holding a series of barnstorming weekend events called the “Dream Gap Tour” across North America.

Tumminia believes the PHF’s latest investment, and the inclusion of health-care benefits, meets the PWHPA’s vision.

“We can’t speak for them, but our position has always been that a single professional women’s hockey league in North America provides the best opportunities for growth and sustainability of the game,” she said. “This investment supports everything we all want to see, and that’s enhance opportunities for athletes and take the sport to the next level.”

Boynton said the PHF's growth is sustainable based on the resources at hand, and hinted there's more to come.