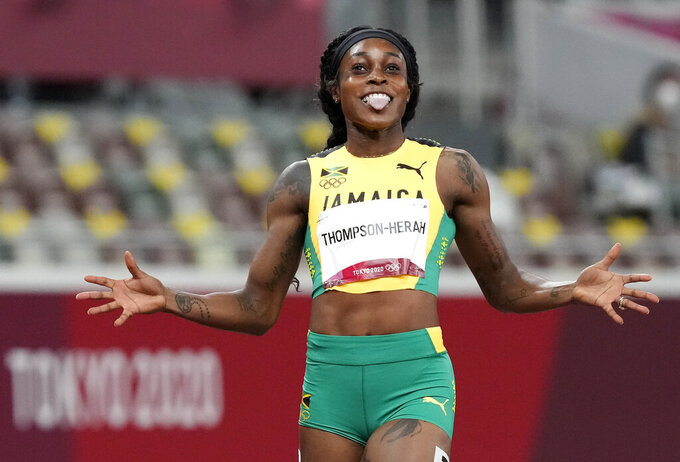 Elaine Thompson-Herah, of Jamaica celebrates after winning the gold medal in the final of the women's 200-meter at the 2020 Summer Olympics, Tuesday, Aug. 3, 2021, in Tokyo, Japan. (AP Photo/Martin Meissner)

TOKYO (AP) — It was billed as a star-studded race that anyone could win.

So long as that person's name was Elaine.

“It means a lot to me to be in that history, to be in that work-hard book,” said Thompson-Herah, who spent much of 2021 ailing with an Achilles injury and didn't reach top form until she got to Japan.

It marked the second time in four nights that Thompson-Herah has won a sprint and recorded a time that fell short of only the late Florence Griffith Joyner's hallowed, 33-year-old world records. The 200 record is 21.34.

In the 100 meters, Thompson-Herah started pointing at the clock a few steps before the finish line and finished in 10.61, which was good for the Olympic record but not Flo Jo's overall mark of 10.49.

In the 200, Thompson-Herah ran hard all the way through and stuck her tongue out as she pushed her chest forward at the line. No questions this time about what would've happened if she'd left it all on the track.

Both finishes, of course, equaled gold medals, and now Thompson-Herah will have at least four when she gets back to Jamaica. There's a chance for a fifth if she competes in the women's 4x100-meter relay this weekend.

“By the Olympic finish, I’ll probably see what I’ve done,” said the 29-year-old, who grew up in Banana Ground on the southern side of the island. "At this moment, I’m just a normal girl.”

This was a much-accomplished field of finalists, defined as much by who didn’t finish on the podium as who did.

Shelly-Ann Fraser-Pryce, who beat Thompson-Herah at both distances in Jamaica's national championships, finished fourth to barely miss out on her eighth Olympic medal.

Shaune Miller-Uibo, who focused on the 200 after winning gold at 400 meters in Rio, came in last after pulling up with a twinge in her hamstring.

Thomas, the neurobiology grad from Harvard, ran a 21.61 at Olympic trials that staked her claim, however briefly, as the second-fastest woman in history. It completely realigned her thoughts about what was possible in Tokyo. She won the bronze by .07 seconds.

“It feels amazing because I really worked for that one,” Thomas said. "I fought tooth and nail those last 30 meters.”

While Thompson-Herah is drawing comparisons to Bolt, she joins yet another Jamaican, Veronica Campbell-Brown, along with Barbel Wockel of the former East Germany as the third back-to-back champion in the 200.

If Thompson-Herah's win was no surprise, then Mboma's second-place finish was a stunner that figures to bring one of sports’ thorniest issues back to the fore.

Mboma moved to the 200 because she wasn't allowed in the 400, which is her favorite event. Tests ordered by World Athletics found she and her teammate, sixth-place finisher Beatrice Maslingi, had high natural testosterone, which meant they fell under the same regulations that have sidelined two-time Olympic champion Caster Semenya of South Africa in the 800 meters.

In the final, Mboma broke the under-20 world record for the third time in a week, and looked stunned when she crossed the finish line.

“I came here for the experience,” she said. “Now I did better.”

Another contender was the Ivory Coast's Marie-Josee Ta Lou. She opened the sprints last week with a head-turning 10.78 in the 100-meter heats – the first sign that Tokyo could be a very fast track.

It is, especially when Thompson-Herah is on it.

But she's not the only one.

Her victory came several hours after Norway's Karsten Warholm obliterated his world record by .76 seconds, finishing the 400-meter hurdles in 45.94.

In pole vault, Sweden's Armand Duplantis had the win wrapped up, but hadn't missed, so he got three chances at the world record of 6.19 meters. He couldn't clear it, and so made due with a gold medal and a jump of 6.02.

That meant the U.S. had to wait for its second gold medal of the meet, and it was captured by Athing Mu in the 800 meters. In her preliminary heat, the track announcer butchered her name. She'll have to brush up for Mu's medal ceremony Wednesday. (It’s pronounced “uh-THING moh”).

Not heading to the podium is Gwen Berry. The outspoken American hammer thrower finished 11th in the final that went to Anita Wlodarczyk of Poland, who took gold for the third straight Olympics.

While Berry said goodbye, Allyson Felix finally said hello to the Olympic track. She easily won her 400-meter heat on the first step to what could be a women's record — 10 Olympic medals.

After building a comfortable lead in the 200-meter semifinals, he put things on cruise control with about 15 meters left, only to be stunned to see Canada's Aaron Brown and Liberia's Joseph Fahnbulleh busting it to the line to edge him out in a photo finish.

Lyles had to wait a while to find out if he would earn one of two wild-card spots in the final. His run of 19.99 seconds was fast enough, and he insisted nothing was amiss.

There will be no cruise control when he lines up Wednesday night in a field that will include Andre DeGrasse and 17-year-old American Erriyon Knighton, who played to the cameras and ran his hands across his nametag when he qualified.

As for the women's champ at 200 meters — she no longer needs an introduction.

"It means a lot to me because I’ve been through a lot," Thompson-Herah said. “Even though I don’t have to tell my story, this tells my story.”