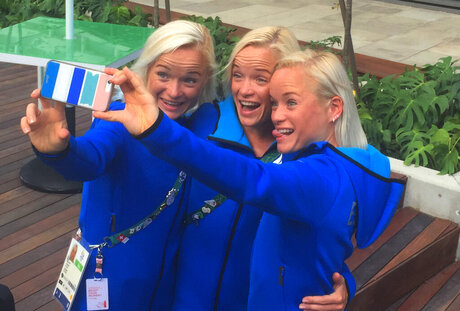 RIO DE JANEIRO (AP) — The Luik triplets have already encountered some strange looks at the Olympics.

The Estonian sisters, who will compete in the women's marathon, say they have gotten some "funny faces" from security guards who believe they have already waved one of them into the athletes village.

On Sunday, Olympic spectators will face the challenge of trying to tell the 30-year-old blonde-haired, blue-eyed sisters apart from afar.

Their coach, Harry Lemberg, had some advice for those who can't read the bibs.

"I think the first part of the race, Leila and Lily run together," Lemberg said. "After 25-30 kilometers they follow together or see who is (to) go in front ... I think Liina (will be) a little bit behind."

While the Olympics have seen twins competing together, triplets are a first, according to Olympic historian Bill Mallon, who keeps a database of athletes.

According to Lily, it is Leila who is "maybe the toughest" of the trio.

But Liina is the easiest to spot when her arms aren't covered because she has a three-swan tattoo which, naturally, symbolizes the three of them.

"It's an amazing feeling, I think it's better to run with sisters," Liina said. "I feel good support, a mentally good vibe and good energy from my sisters also.

"I think I have two supporters in the race. We are supporting each other very much and I think we feel that kind of energy with each other."

The Luiks, from the medieval city of Tartu, only turned pro at the relatively late age of 24.

"We saw that we can't now ... do the shorter distances, to do so much speed work," Leila said. "We love to be (with) nature or do the long training and we love running. Because of (that) we decided to do marathon running."

The dream would be finishing on the podium together in Rio de Janeiro but they know that is unlikely.

"We are happy," Leila said, "if we finish together."