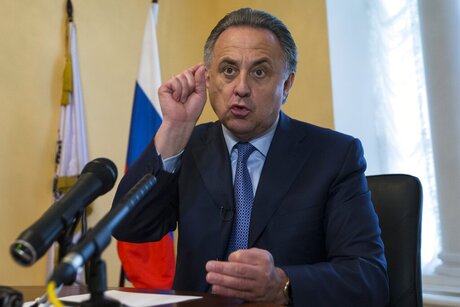 By: JIM HEINTZ (AP)
MOSCOWCopyright 2020 The Associated Press. All rights reserved. This material may not be published, broadcast, rewritten or redistributed.
55.752237.6156

MOSCOW (AP) — Russia's Olympic Committee said Saturday that eight of the country's athletes have registered positive in doping retests for the 2012 London Games.

The brief statement from the ROC did not give names or what disciplines the athletes were in, but said they came from three different sports.

It said further information would not be released until so-called "B samples" were tested that would confirm or contradict the retests. The International Olympic Committee stores Olympic doping samples for 10 years to reanalyze them when newer methods become available.

The announcement came amid heightened attention to the doping of Russian athletes.

The international track and field federation suspended Russia's team from global competition, including the Rio de Janeiro Olympics in August, after a World Anti-Doping Agency commission report detailed state-sponsored doping. The IAAF is set to decide on June 17 whether to maintain or lift its suspension.

Earlier this week, Russian state television reported that 10 medalists from the 2008 Beijing Games, including 2012 Olympic high jump champion Anna Chicherova, were among 14 Russians that tested positive in the reanalysis of their doping samples. Chicherova, who won bronze in Beijing, expressed "shock" at the result.

The IOC said Friday that 23 athletes from five sports and six countries had positive findings in retests with improved techniques on 265 samples from the London Games. The IOC did not identify the athletes, their sports or their nationalities. The current retesting program targeted athletes who could be eligible to compete in Rio.

The World Anti-Doping Agency announced this month that it has appointed an independent overseer for an investigation into allegations of state-sponsored doping in the Russian team at the 2014 Sochi Olympics.

In an interview published in the New York Times, Grigory Rodchenkov, the former head of the Russian lab now living in Los Angeles, said that he switched tainted urine samples for clean ones at the doping lab used for the Sochi Games, with help from people he believed to be officers of the Russian security services.