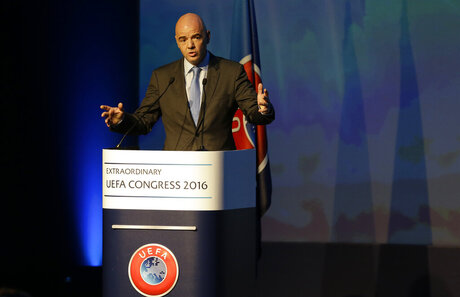 By: ROB HARRIS (AP), GRAHAM DUNBAR (AP)
ZURICHCopyright 2020 The Associated Press. All rights reserved. This material may not be published, broadcast, rewritten or redistributed.
47.36678.55

ZURICH (AP) — FIFA President Gianni Infantino hit out on Friday at attempts to "undermine" the World Cup in Russia, saying he will not judge the country on the investigation which documented a state-sponsored doping program that included soccer.

Infantino told The Associated Press it was still "very good" working with Russian Sports Minister Vitaly Mutko, who has been accused of personally intervening to cover up a doping case of at least one foreign footballer in the Russian Premier League.

The details emerged in a report authored by Canadian lawyer Richard McLaren, who was attending an ethics conference at FIFA HQ as Infantino conducted a 30-minute interview with the AP.

McLaren's report cast doubt on Russia's suitability to host sporting events, with the International Olympic Committee temporarily withdrawing its backing for competitions in the country.

"If there are elements on doping and football, then FIFA's bodies will deal with that."

There appears no risk of Russia losing the 2018 World Cup, with only nine months until the doping-tainted nation hosts the Confederations Cup, which serves as the warmup event.

"Let's work in a positive sense in this direction rather than trying to undermine this event."

McLaren also found that 11 positive doping cases of Russian footballers were made to disappear.

Mutko, as well as being sports minister, leads the country's soccer federation, and sits on FIFA's ruling council. He was banned by the IOC from attending the Rio de Janeiro Olympics last month based on McLaren's findings, but he retains Infantino's backing.

"We have committees in place. Whatever evidence Prof. McLaren has, he will send it to the ethics committee of FIFA, and they will instruct or not a case," Infantino said. "As long as this doesn't happen I will certainly not participate in any speculation or any problems.

"I am working with the people who are there, who are legitimately elected ... he has been working in terms of the organization of the world, as far as I can judge, in an excellent way so far. So, for me and for us, it is certainly very good to continue working with him."

Here are other issues Infantino addressed seven months after being elected FIFA president:

Infantino was pleased with the enthusiasm for the women's event in Rio de Janeiro but questioned the future viability and worth of the men's competition.

"This is something everybody speaks about in the football circles and also in the Olympic circles but nobody dares raise the topic," Infantino said. "But at the end nobody is really happy with that event because the international match calendar is already congested. There are no free dates."

Clubs are not obliged to release players for the Olympic men's competition, where countries are only allowed three players over the age of 23.

"So if nobody is happy there must be something wrong. We really need to look at that ... I don't have the solution."

The threat of Europe's elite clubs breaking away to form a wealthy Super League re-emerged over the last year, leading to England, Spain, Germany, and Italy each securing an extra guaranteed place in the Champions League.

Some UEFA members are unhappy that the governing body caved into the powerful clubs.

Infantino, who was UEFA general secretary before succeeding Sepp Blatter at FIFA, said "nobody has ever put a gun to my head" when negotiating with Europe's big leagues.

Infantino warned that "everybody knows the consequences" of splitting to form their own competition. Players participating in such a league, outside of a FIFA structure, could face being banned from featuring for their countries in international competitions.

Infantino has endured a rocky start to his first seven months in power, going through a FIFA ethics investigation before being cleared of any misconduct relating to use of private flights and improperly accepting gifts.

Infantino said he was still working to "rebuild trust" in FIFA and overhaul the Zurich-based organization.

"When you have to embrace such significant reforms, it's obviously normal you get some blowback and turbulence," Infantino said.