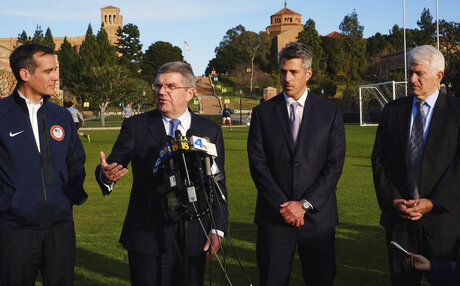 By: STEPHEN WILSON (AP)
LAUSANNE, SwitzerlandCopyright 2020 The Associated Press. All rights reserved. This material may not be published, broadcast, rewritten or redistributed.
46.5166.63282

LAUSANNE, Switzerland (AP) — With another report on Russian doping looming at the end of this week, the presidents of the IOC and World Anti-Doping Agency met Monday to clear the air over their "perceived differences" over the handling of previous evidence of systematic cheating in Russia.

IOC President Thomas Bach and WADA head Craig Reedie said they agreed to put aside any disagreements and "move forward together" in tackling doping and protecting clean athletes.

"There was a very positive atmosphere in our meeting today, and I am very happy that any perceived misunderstandings could be clarified," Bach said. "We agreed to continue to work closely together to strengthen the fight against doping under the leadership of WADA."

The two men met ahead of a three-day meeting beginning Tuesday, in Lausanne, of the International Olympic Committee executive board. On Friday in London, WADA investigator Richard McLaren will release his latest findings on Russian doping, including evidence of manipulation of samples at the 2014 Sochi Winter Games.

The IOC and WADA clashed over the summer after the agency recommended that Russia be banned outright from the Rio de Janeiro Games. The IOC rejected that call, instead allowing international federations to decide which Russians could compete.

"This was a very constructive meeting with a good atmosphere," Reedie said. "We share a common goal to strengthen the fight against doping and to protect the clean athletes and in this direction we will closely cooperate."

The IOC said it was confident that progress was being made on reforming WADA's governance and setting up an independent drug-testing unit under the agency's umbrella ahead of the 2018 Winter Games in Pyeongchang, South Korea.

Reedie, an IOC member from Britain, was re-elected last month to another three-year term as WADA president. That came after some leading Olympic officials had publicly called for a "neutral" president to take over.

McLaren's first report, issued in July, detailed state-backed doping programs and cover-ups in Russia across more than two dozen summer and winter Olympic sports. His latest report is expected to focus on Sochi, including allegations by the former Russian lab director that he helped dope Russian athletes before the games and swapped tainted samples for clean one through a concealed hole in the wall at the lab.

Without knowing the contents of McLaren's report, the IOC board is expected to issue a statement setting out how it will deal with the new findings — including the possibility of stiff sanctions.

The report will be sent to two commissions that the IOC has set up to look into the allegations.

Bach said last month that once the investigations and hearings are completed, the IOC will take "the necessary measures and all the sanctions because if only part of this would be true, it would be an unprecedented attack on the integrity on the Olympic Games and on the Olympic competitions."

The IOC will also review the result of its retesting of stored samples from the 2012 London Olympics and 2008 Beijing Games, a program which has produced about 100 positive cases so far. Many of the positives have involved weightlifting and athletes from former Soviet countries such Belarus, Kazakhstan and Ukraine — which could face IOC scrutiny for possible warnings or sanctions.

Pyeongchang is preparing for the Winter Games — just 14 months away — at a time when South Korean President Park Geunt-hye is facing possible impeachment in a political scandal centering on allegations that a long-time friend manipulated government affairs from behind the scenes.

Tokyo, meanwhile, is trying to reduce costs of the 2020 Olympics after construction costs soared to several times their original estimate. The IOC told Tokyo organizers last week it would not accept a proposed budget of up to $20 billion and demanded further cuts.

The IOC board is expected to ratify the venue locations for the five additional sports — baseball-softball, surfing, skateboarding, karate and sports climbing — approved for inclusion in the Tokyo Games.

The proposed venues are: Yokohama Stadium for baseball-softball; Nippon Budokan for karate; new structures on Tokyo Bay for sports climbing and skateboarding; and neighboring Chiba prefecture for surfing.