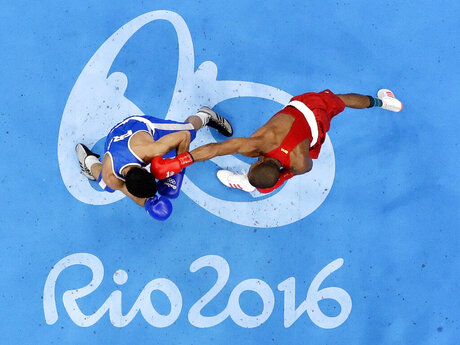 By: GREG BEACHAM (AP)
RIO DE JANEIROCopyright 2020 The Associated Press. All rights reserved. This material may not be published, broadcast, rewritten or redistributed.
-22.9028-43.2075

RIO DE JANEIRO (AP) — The International Boxing Association removed an undisclosed number of referees and judges from the Olympics on Wednesday after determining they had not met the organization's standards of competence.

AIBA declined to provide the judges' names or the fights in which they failed. The results of all bouts will stand, however.

In a statement, the governing body said its refereeing and judging committee reviewed all 239 bouts from the first 11 days of the Olympic tournament. The committee determined that "less than a handful of the decisions were not at the level expected."

The banished judges apparently didn't include some of the participants in the two most prominent disputed decisions.

Russian heavyweight Evgeny Tishchenko's victory over Kazakh power-puncher Vassiliy Levit sparked a wide public outcry over the decision, which rewarded Tishchenko's retreat over Levit's power and excitement. AIBA executive board member Tom Virgets told The Associated Press the result is likely to be a catalyst for changes in the organization's judging criteria.

Judge Armando Carbonell Alvarado of Colombia, who joined his two colleagues in awarding that fight 29-28 to Tishchenko, was on the AIBA's list of judges and referees working Wednesday's fights.

Irish bantamweight world champion Michael Conlan also complained vociferously and profanely after his quarterfinal loss to Russia's Vladimir Nikitin on Tuesday, accusing AIBA and Russia of wholesale corruption. A Sri Lankan judge and a Brazilian judge from that fight were on AIBA's list of working officials Wednesday as well.

"In terms of the response from the boxing federation this morning, I think it's a very professional response to some concerns people have about the judging system," IOC spokesman Mark Adams said.

Those disputed decisions and a handful of less-prominent calls took attention from an otherwise entertaining Olympic tournament. Coaches and fighters have piped up with their usual complaints about unfair scoring, but Levit in particular appeared to have such a strong case that even AIBA officials were clearly concerned.

"It's very, very subjective," U.S. coach Billy Walsh said. "Some days the aggressor wins. The next day, the counterpuncher wins. Each five judges have a different set of criteria. They can emphasize whatever they want. ... You sit a few guys down to look at any fight, and they might all come up with a different decision and interpretation of it. But these are highly educated and competent referees and judges that are on the circuit full-time, being paid, so they should know better than we do."

Other fighters also entered the ring worried about fairness after the heavyweight title fight and Conlan's loss to Nikitin, who bled profusely from a cut on his scalp from a previous fight.

"I'm not a judge, but the fact I've seen some pretty bad judging yesterday, especially people going against Russia, it did give me a little scare," said defending middleweight gold medalist Claressa Shields after her dominant victory over Russia's Anastasiia Beliakova in her Rio debut Wednesday. "But the judges can't be God."

Indeed, amateur boxing is a notoriously difficult sport to score with its three-round fights and wide variations in skill sets. The dilemma extends to the entire sport, of course: professional boxing judges are routinely accused of incompetence and corruption by angry fans and fighters.

The majority of fighters who reach the second half of a major tournament like the Olympics inevitably will claim robbery or incompetent judging, with almost every national team seeing a conspiracy against its fighters.

AIBA moved from a long-reviled punch-counting system to a traditional 10-point pro scoring system three years ago. Many boxers and coaches have embraced it, but not Walsh, the longtime Irish national coach.

"To me, it's back to what we were in 1988, when I fought in the Olympic Games and Roy Jones got robbed in the final," Walsh said. "I haven't seen it as bad since then. What happened after that? The computer came into the equation. Maybe we need to go back to the computer."

AIBA picks its Olympic referees and judges from a pool of 36 men and women. Five judges score each fight, but a computer randomly throws out two of the scores.