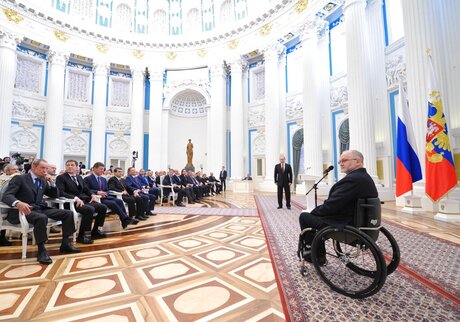 By: TIM DAHLBERG (AP)
RIO DE JANEIROCopyright 2020 The Associated Press. All rights reserved. This material may not be published, broadcast, rewritten or redistributed.
-22.9028-43.2075

Not only are their athletes courageous, so are their leaders.

They did what Olympics officials wouldn't Sunday, kicking the Russians out of their games next month for operating a state-sponsored doping system that helped both Olympians and Paralympians top the medal charts in Sochi two years ago.

And they did it without mincing words.

"Their medals over morals mentality disgusts me," said Philip Craven, head of the International Paralympic Committee.

That it came to this is not only unfortunate, but sad. There are Russians who have labored their lives to overcome disabilities — including, surely, some who are clean — who now won't be able to compete in the biggest sports event in the world open to people with handicaps.

Look at it that way, and it seems almost mean spirited to keep them out.

There's really no difference between an Olympian doping to gain a few extra seconds on the track or the pool, and a Paralympian trying to do the same.

Cheating is cheating, and it has no part in any games.

That doesn't come as news to Olympic officials, though they have chosen to conveniently ignore it. They backed down last month when presented the opportunity to make a statement on behalf of clean sport ban the entire Russian Olympic team from Rio despite clear evidence of a doping scheme that for years has defrauded other athletes.

And now there are athletes in Rio who simply don't know whether they're competing on a level playing field or not.

Given the same chance to act decisively — and with even more evidence — the IPC showed it had the backbone that its bigger brother doesn't.

"The complete corruption of the anti-doping system is contrary to the rules and strikes at the very heart of the spirit of Paralympic sport," Craven said. "It shows a blatant disregard for the health and well-being of athletes and, quite simply, has no place in Paralympic sport."

The rare stand on behalf of clean athletes everywhere came on the same day Russian swimmer Yulia Efimova in the 100-meter breaststroke as a late entry from the Russian team. The reigning world champion who served a 16-month suspension for doping and tested positive this year for meldonium had been initially banned along with six other Russian swimmers.

But swimming officials let her in, just as officials in other federations have allowed 277 other Russians to try for gold in Rio. That despite the release of the a report commissioned by the World Anti-Doping Agency last month that detailed a system that included switching out urine samples for athletes who had been doping.

Craven said Richard McLaren, who was commissioned by the World Anti-Doping Agency to conduct an investigation of Russian doping, initially found 35 samples altered by a Moscow testing lab. Details on another 10 altered tests were provided this week, and the Craven said the IPC now has evidence that the sample swapping that existed in the 2014 Sochi games was also in operation weeks later at the Sochi Paralympic Winter Games.

Russian officials reacted in a typically angry fashion, but the facts seem clear. Not only were Russian Olympians doping, but their Paralympians were, too.

Just why the Paralympics were so important to high Russian officials that they felt they had to cheat to win is a bit hard to understand. While more than 4,000 athletes will compete in the Rio Paralympics next month, they are little noticed by most and get only a few hours airtime on NBC.

But cheat they did, and now they will pay a price.

In the fight against doping, the less physically fortunate are leading the way.