Home » Seoul » Column: Pros fighting in Rio a lousy idea on many levels 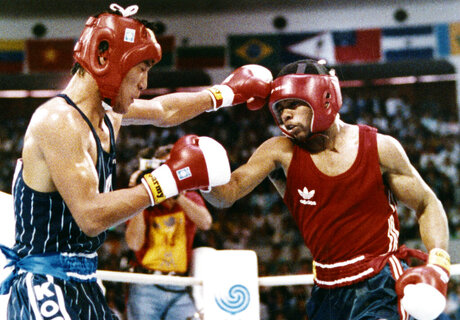 By: TIM DAHLBERG (AP)
Copyright 2020 The Associated Press. All rights reserved. This material may not be published, broadcast, rewritten or redistributed.

Manny Pacquiao won't be there, passing up a chance to win the first Olympic gold medal for the Philippines.

You won't see Gennady Golovkin and Canelo Alvarez fighting three-rounders in Rio, either.

Thankfully, the people who run Olympic boxing are still so inept that they waited too long to roll out the welcome mat for professional boxers in the Olympics. That likely means no pros of note in Rio, despite the vote Wednesday in Switzerland to let them compete.

It's a lousy idea on a number of levels, though that should come as no surprise. Boxing in the Olympics has been pretty much a farce since Roy Jones Jr. was robbed of a gold medal by a hometown decision in Seoul in 1988.

But mixing seasoned pros with teenage amateurs goes beyond merely tilting the playing field in Rio. It's potentially dangerous, especially when boxers will not be wearing protective headgear for the first time since the Moscow Games in 1980.

That didn't stop the head of the sport's governing body, known as AIBA, from crowing about the vote to allow pros to fight for gold medals.

"This is part of the vision," CK Wu said. "I would say it is in my masterplan."

Suspicious boxing types believe part of that masterplan is to turn AIBA into a force in professional boxing, a fractured world where promoters, television networks and sanctioning organizations battle for power and riches. The World Boxing Council has gone as far as threatening to suspend any of its champions or ranked fighters if they fight in the Olympics.

"Boxing is not a game and cannot be compared with the popularity of having the basketball 'Dream Team' playing in the Olympics putting a show for the world to see," WBC President Mauricio Sulaiman wrote in recent letter to Wu. "The defeated teams went home humiliated but healthy. Boxing is a contact sport and can be extremely dangerous if the level of competition is inadequate."

It's hard to side with any of boxing's myriad of sanctioning organizations on any issue, given their miserable track record over the years in doling out favors and titles. Boxing has survived in spite of them, not because of them.

Throwing another organization into the mix, though, is hardly the answer. That's especially true when adding pros to the Olympics could decimate the amateur programs that over the years produced such stars as Muhammad Ali, George Foreman and Sugar Ray Leonard.

Foreman, who won a gold medal in the 1968 Olympics, has come out against pros in the Olympics, saying amateurs are the lifeline of the games. Mike Tyson also weighed in against it recently, but for different reasons, saying a quick amateur could embarrass a pro in a three-round fight.

Meanwhile, USA Boxing abstained on the vote in Switzerland and said all of its boxers in Rio will be amateurs. But the organization said it realizes the inevitability of pros fighting in the Olympics, likely in 2020 in Tokyo.

The argument could be made that boxing is simply catching up to other sports, which long ago discarded the old notion of amateurism that used to be so important to the Olympics. It's also true that Cuba — which has dominated amateur boxing in recent Olympics — enters fighters who are so much older and more experienced that they could be considered pros.

But the idea of someone like the fearsome Triple G being matched with an 18-year-old in the opening round of the Olympics is enough to send shudders through anyone who cares about the health and safety of fighters. The early rounds of past Olympics featured some fighters who had no business being in the Olympics, much less fighting highly skilled pros.

The only good news is that Wu waited too long to allow many pros in Rio. Pacquiao has already said he won't go, and Golovkin has expressed no interest in lacing up the gloves for Kazakhstan in Rio instead of chasing a megafight with Alvarez.

Russia's boxing coach suggested Wednesday that two current world champions, Sergei Kovalev and Denis Lebedev, could fight for gold in Rio. That was news to Kovalev's promoter, Kathy Duva, who said the knockout artist is fighting in July and has a tentative date to meet 2004 gold medalist Andre Ward in November.

"He has a few other things to do this year," Duva said.