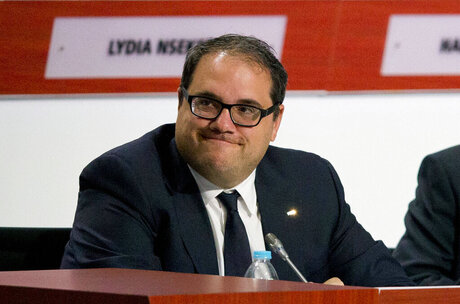 By: ROB HARRIS (AP)
LONDONCopyright 2020 The Associated Press. All rights reserved. This material may not be published, broadcast, rewritten or redistributed.
51.5085-0.12574

LONDON (AP) — A bigger World Cup in 2026 will boost North America's chances of hosting the tournament, the president of the CONCACAF region told The Associated Press.

FIFA President Gianni Infantino earlier this week raised the prospect of adding another 16 teams to make it a 48-team tournament, a move that would reduce the pool of countries with sufficient infrastructure.

"From a 2026 perspective, pick a number (of finalists) and North American can handle it," Victor Montagliani, president of the North and Central America and Caribbean soccer confederation, said Tuesday in an interview. "A CONCACAF bid would be strong regardless of what number we finally set on."

The World Cup was last staged in the CONCACAF region by the United States in 1994. The Americans are eager to get another shot at hosting in 2026, potentially linking up with neighbors Canada and Mexico.

"Is there an opportunity to combine the three countries? Perhaps. We don't know that yet," said Montagliani, a FIFA vice president. "There have been zero formal discussions. We are not there yet."

After the troubled bidding process for the 2018 and 2022 tournaments, which sparked years of corruption investigations, FIFA will be hoping for a smoother vote for 2026. Originally earmarked for 2017, the decision by the FIFA membership is now not due until 2020.

With Africa, South America, Europe and Asia hosting the World Cups between 2010 and 2022, it had been widely accepted that it should be North America's turn for the first time since 1994.

FIFA's statues currently prevent consecutive World Cups being staged on the same continent, but China could yet seek to follow 2022 host Qatar. Chinese conglomerate Wanda signed up as a top-tier FIFA sponsor in March saying it wanted to be "better placed" to help decide where future editions of the World Cup are awarded.

"There has to be some sort of rotation or else you look what is happening with the Olympics," Montagliani said, referring to Tokyo hosting the 2020 Olympics between the 2018 and 2022 Winter Games in Pyeongchang, South Korea, and Beijing.

"I don't think it's a good thing that it keeps on going to one area. It's not a World Cup that belongs in one region. So I think so sort of rotation needs to occur because the World Cup belongs to the world and we need to respect that."

Montagliani applauded Infantino for "thinking outside the box" by floating the idea of a 48-team World Cup.

"There are traditionalists in the game who I think, if it was up to them, would still have a 16-team World Cup," Montagliani said in an interview in London. "The reality is that the World Cup is not just an economic beast, but a product that inspires hope for countries. So if we can improve it, make it bigger without losing its romanticism, why not?"

Before FIFA settles on a new format, Montagliani is sure there will be an "exhaustive process of review and cost benefit analysis." The format and bidding process will begin to be discussed next week when Infantino chairs a FIFA Council meeting in Zurich.

In outlining one potential format earlier this week, Infantino said, "you could have a tournament in which the 16 best teams advance to a group stage and the other 16 will came out of a 'playoff' ahead of the group stage, and the World Cup could end up with 48 teams."

The more pressing issues for FIFA center on the 2018 World Cup with the spotlight increasingly on Russia over racism and doping in sport, and the involvement in the war in Syria.

Montagliani sees no need to strip Russia of the World Cup.

"It's a very delicate situation because we are a sport," he said. "You try to as much as possible stay out of the geopolitics of the world because it's a just a dangerous thing (to mix) and so it is a bit of walking a tightrope."

The contentious dual votes on the 2018 and 2022 World Cups sparked years of criminal investigations and FIFA inquiries.

FIFA said there was not sufficient evidence to warrant removing their country's hosting rights. But before being banned and ousted from the FIFA presidency, Sepp Blatter said last year that American authorities would not have indicted more than 40 people in its soccer investigation had it not been for the 2010 vote outcome.

To Montagliani it was the "tipping point," providing an "opportunity to clean the game."

"In some regards maybe the best thing that happened in football was Russia and Qatar," Montagliani said in a speech Wednesday at the Leaders sports business conference in London.