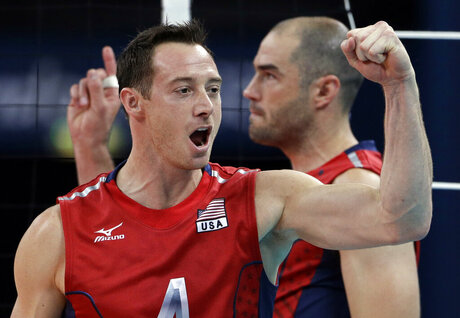 By: JANIE McCAULEY (AP)
RIO DE JANEIROCopyright 2020 The Associated Press. All rights reserved. This material may not be published, broadcast, rewritten or redistributed.
-22.9028-43.2075

RIO DE JANEIRO (AP) — David Lee debated whether to even march in another opening ceremony. He has done the Olympic pomp-and-circumstance thing a few times by now.

The U.S. volleyball player waited until Friday to decide, wanting to make sure his long, 34-year-old legs would be plenty fresh for the Americans' volleyball opener Sunday against Canada as he begins his third and final Olympics.

Then he realized how much he needed to be there at Maracana Stadium to take part in the festivities alongside his teammates, eight of whom have never been to an Olympics prior to Rio de Janeiro. And also his fellow Americans and the world's best athletes.

And, for himself before his Olympic hurrah.

"It's your last one, do it," Lee said upon finishing Friday training at Rio's Navy School. "I'm definitely going to walk. It was more based on how I felt today after training, if I felt I was in good enough shape to spend an 8-hour, 10-hour day on my feet. I'm excited, I want to walk. It was just based on whether I thought it was going to be an issue, would it affect my play in two days? My first year we had four or five of our veterans who didn't walk and it was their last Olympics, because they didn't think they were going to be in good enough shape the next day. I feel good."

Lee is cherishing every part of doing this for the last time. After a scrimmage against Argentina on Thursday night, he obliged every Navy cadet and military person who packed the gym to watch the match by posing for photos, snapping selfies of just taking a moment to offer a friendly hello or greeting — even trying some Portuguese.

Coach John Speraw left it up to his Olympic-experienced players to decide whether to go to the opening ceremony.

"We're not too grizzly yet, so we should be embracing our youth and the joy that we have being part of the Olympic Games, and let that competitive spirit and that energy be the catalyst for our success," Speraw said.

Wherever he goes, whatever country this sport leads him to next, Lee makes a point to thoughtfully speak a few words — or at least make a valiant attempt — in another language because he knows by now how much that means to the local fans. He cherishes the people he meets around the globe.

The middle blocker — who is 6-foot-8 — is a regular visitor to Brazil for volleyball. Once, after he finished with the U.S. at World League in Rio, having noticed big soccer crowds he got off the team bus at Maracana Stadium while en route back to the hotel. And Lee found his way into the match all right, swarmed by Brazilian volleyball fans who instantly recognized him and sought autographs and photos.

There's not time for quite that kind of try-anything adventurous spirit ahead of the Olympic tournament, yet Lee still tries to take in as much culture as he can during the jam-packed schedule during days of preparation and competition.

"No funny stories yet. I'm still waiting," he said. "This is more of a business trip. The last time I had that soccer adventure was after World League finals, so it made sense for me to get off that bus."

Plenty of fun, though? You bet.

Earlier this week, gymnastics sensation Simone Biles and Lee posed back to back to show their dramatic 4-foot height difference. The photo has been a social media hit.

"That was a cool photo with tall and small," Lee said.

Lee and four-time Olympian Reid Priddy are the last two members of the 2008 Beijing Olympic team. Speraw is leaning on these two, plus Matt Anderson, when he needs to run ideas by the players or seek valuable insight.

Of course, this opening ceremony will be a little more special to Lee.

"Sentimental, oh, of course, yeah, 100 percent," he said. "It's definitely going to be sentimental. The best part of this experience is meeting the athletes before and during the walk. That's the key part, because we're not going to see them because we're out of the village, which is kind of a bummer."