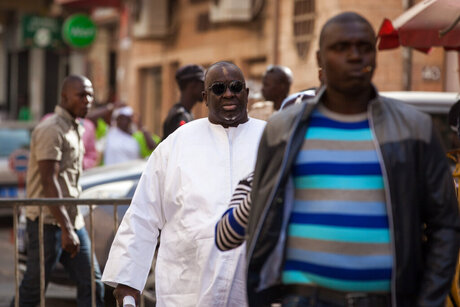 By: BABACAR DIONE (AP)
DAKAR, SenegalCopyright 2020 The Associated Press. All rights reserved. This material may not be published, broadcast, rewritten or redistributed.
14.6937-17.4441

DAKAR, Senegal (AP) — The son of former IAAF president Lamine Diack was interviewed for more than seven hours by police in his native Senegal in connection with the corruption scandal surrounding track and field's world governing body.

Papa Massata Diack, a former IAAF marketing consultant who is also wanted for questioning by prosecutors in France, was interviewed late into Wednesday night at police headquarters in Dakar.

Papa Massata was banned for life from the sport last month in a bribery and extortion case involving Russian doping, and Interpol has issued a wanted notice for him to face corruption charges in France.

Although Senegal says it will not extradite him, he could be arrested if he leaves his home country.

Papa Massata's lawyer, Bamba Cisse, described the appearance at the Senegalese police station as a "hearing" but said his client was not facing any criminal charges in Senegal.

Police did not characterize the interview and Senegalese authorities have not said if they will pursue charges against Diack.

Wearing a long white robe, Diack arrived for questioning just after 4 p.m. He left at midnight without commenting, only smiling and saying "thank you" to a group of apparent supporters who had gathered outside.

"He was summoned by police for a fair hearing," the lawyer, Cisse, told The Associated Press.

Papa Massata Diack has appealed his life ban from athletics to the Court of Arbitration for Sport. He was banned after being found guilty by the IAAF's ethics commission of conspiring to extort hundreds of thousands of dollars from Russian marathon runner Liliya Shobukhova so she could avoid a doping ban before the 2012 Olympics.

Papa Massata Diack and his father are both under investigation in France for extorting bribes from athletes to cover up doping.

Lamine Diack, who headed the IAAF for 16 years, is accused by French prosecutors of pocketing more than 1 million euros ($1.1 million) from bribes in exchange for covering up doping cases, mainly involving Russian athletes.

Papa Massata Diack, who worked under his father at the IAAF, was "very active" in the corruption, French prosecutors have alleged.

Lamine Diack was arrested in France last year and released on bail after being placed under investigation for corruption and money laundering. Prosecutors said they would also have arrested the son if he had been in France.

Papa Massata Diack and another of Diack's sons, Khalil, are also accused of attempting to blackmail Turkish runner Asli Cakir Alptekin a few months after she won gold in the 1,500 meters at the 2012 London Olympics, suggesting she could pay to quash a doping positive based on her blood readings.

Papa Massata Diack faces other allegations related to the bidding process to host the Olympics. Britain's Guardian newspaper reported that it had seen emails from him regarding alleged "parcels" to be delivered to six IOC members in connection with the failed bid from Doha, Qatar, for the 2016 Games.

It wasn't known whether any of the parcels were delivered.