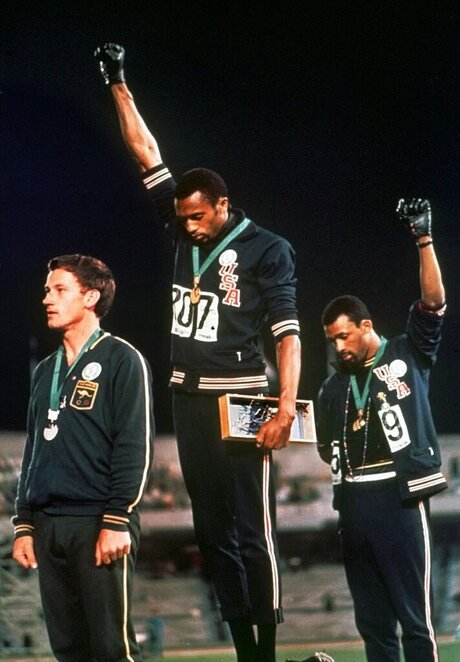 By: JANIE McCAULEY (AP)
SAN JOSE, Calif.Copyright 2020 The Associated Press. All rights reserved. This material may not be published, broadcast, rewritten or redistributed.
37.3394-121.895

SAN JOSE, Calif. (AP) — Former Olympic sprint stars and civil activists Tommie Smith and John Carlos earned fame and scorn when they raised their gloved fists on the medal podium at the 1968 Mexico City Games and bowed their heads through the national anthem in protest during the heart of racial tension in the U.S.

They were booted out of the Olympic village, condemned and sent home, then eventually celebrated back in the Bay Area years later.

As the Rio de Janeiro Olympics prepare to kick off this week, these two men returned to where they shined on campus at San Jose State and now have a 23-foot statue of that history-making moment, helping the university with the announcement Monday that it is reinstating the storied men's track and field program in 2018 after nearly three decades without one.

"The Olympic project for human rights was started, and it was completed," Smith said Monday. "We'll stand behind ideas like that 'til the day we die. This statue on my right represents you all. John Carlos and Tommie Smith might be the ones who put a foot on those steps, who were standing, but let me tell you, when we walked off, we carried you with us. I humbly thank all of you for the support back then. ... One great man said, 'There is redemptive actions in proactive sacrifices,' and I thank God that he made it possible and we took those steps to bring it forward."

The renowned and respected "Speed City" track team Smith and Carlos carried to success and Olympic glory is back at last — with the two sprinters now in their 70s.

Smith won a gold medal and Carlos the bronze in the 200 meters in Mexico, committed to their "Olympic Project for Human Rights." They wore black socks and no shoes to represent black poverty, raising their fists to symbolize black power.

Carlos said he is appreciative of getting another opportunity to come back to San Jose State and "see so many people that remember and welcome us back with love, because that's what we exuded all the time we were here, was love for you guys as well."

The city of San Jose is embracing the university's decision, also remembering what Smith and Carlos stood for during their memorable Olympics in Mexico City.

"That race was at the forefront of national consciousness," San Jose Mayor Sam Liccardo said. "It raised our national struggle for racial justice to global consciousness. And of course today, again, race has surged in a national discussion."

With many of their former teammates on hand, Smith and Carlos cherished the idea that their legacy would carry on through new young men in track and field in a place that meant so much to their athletic careers. Men's track and field was dropped in 1988.

"We're also bringing back track and field to honor their courageous stand for human rights," athletic director Gene Bleymaier said. "For several years now we've had a dream, a dream that turned into a golden opportunity."

The men's program will be reinstated on Oct. 16, 2018, 50 years to the day after Smith and Carlos made their silent protest. The university has a women's program but the team practices 12 miles away at a junior college, so part of Monday's announcement was about the start of a $5 million fundraising campaign to build a new track and field facility on campus.

The men's team will begin competition in the spring of 2019, marking the 50th anniversary of the school's outdoor track NCAA championship in 1969.