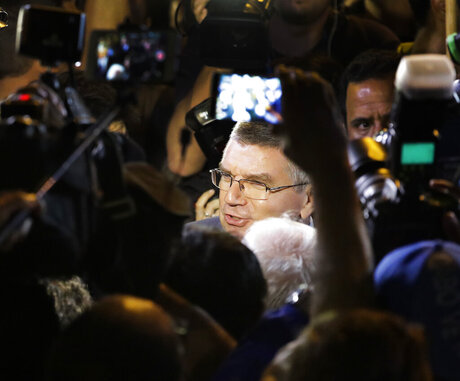 RIO DE JANEIRO (AP) — The IOC approved the entry of 271 Russian athletes for the Rio de Janeiro Olympics on Thursday, meaning 70 percent of the country's original team will compete after a doping scandal that has dominated the buildup to the games.

Also Thursday, the IOC rule barring Russian athletes with prior doping sanctions from competing in the games was rejected as "unenforceable" by a sports arbitration panel, a decision which could open the door to further appeals and more Russians being entered.

The International Olympic Committee announced the go-ahead for 271 Russian athletes about 24 hours before the opening ceremony of the games. Overall, more than 100 Russians have been excluded, including 67 in track and field.

The IOC recently rejected calls from anti-doping organizations to ban Russia's entire team following a report by a World Anti-Doping Agency investigator that detailed evidence of state-directed doping and cover-ups.

Instead, the IOC asked international federations to examine individual Russian athletes to determine if they should be eligible for the games. The IOC set up a panel of three executive board members to review the entries and make the final call, taking into account the advice of an independent sports arbitrator.

After the review, the IOC declared in Thursday's statement: "271 athletes will form the team entered by the Russian National Olympic Committee from the original entry list of 389 athletes."

"We have good news for the fans of the Russian Olympic team," he said. "The majority of the sports have been admitted in full."

"As of today," Zhukov added, "I think there is no other team that is so clean and so carefully controlled than the Russian one."

Several international federations announced separately Thursday that they had received the final approval for Russian entries in their events, including boxing, judo, equestrian, volleyball and golf.

Russia's track and field team remains barred following an earlier decision by the IAAF. Only one athlete, U.S.-based long jumper Darya Klishina, was cleared by the IAAF because she had been regularly tested outside Russia.

Meanwhile, the Court of Arbitration for Sport dismissed the IOC rule that bars from the games any Russian athletes with prior doping sanctions, saying it amounts to sanctioning someone twice for one offense. CAS said the rule "does not respect the athletes' right of natural justice."

IOC spokesman Mark Adams told The Associated Press: "We respect CAS and will of course follow their decision."

The rule was part of the stricter eligibility criteria set up by the IOC in the wake of McLaren's report, which accused the Russian sports ministry of orchestrating a doping program that involved athletes in more than two dozen summer and winter Olympic sports.

CAS said the rule goes against the IOC's stated aim "to provide the athletes with an opportunity to rebut the presumption of guilt and to recognize the right to natural justice."

The CAS ruling came in the cases of Russian rowers Anastasia Karabelshivo and Ivan Podshivalov, who both received two-year doping bans in 2008, and swimmer Yulia Efimova, a bronze medalist at the 2012 London Games who served a two-year ban from 2013-15.

CAS rejected the athletes' appeal to be granted direct entry into the games, saying it was now up to the international rowing and swimming federations to decide whether to let them in or not.

It's not the first time CAS has struck down an IOC anti-doping measure. In 2011, it annulled the IOC's so-called "Osaka rule," which would have barred any athlete who had received a serious doping punishment from the subsequent Olympics.

Zhukov, the Russian Olympic chief, said earlier that it was discriminatory that Russian track and field athletes without doping links were barred from the games, while U.S. sprinters with previous drug suspensions would be competing.

"I believe it's very unfair that such athletes like Yelena Isinbayeva and Sergei Shubenkov, without any doping history, absolutely clean, cannot participate in the Olympics, however many athletes including American runners like for example (Justin) Gatlin and Tyson (Gay), who were punished for doping many times, will take part in these Olympics," he said. "I think this is absolutely unfair."

IOC President Thomas Bach again defended the decision not to ban the entire Russian Olympic team, insisting that athletes cannot be punished for the wrongdoing of their government.

"We had to follow the rules of justice and justice has to be independent from politics," Bach said. "You cannot answer to a violation of a law by another violation of a law. This is destroying justice. We had to respect basic principles of natural law."