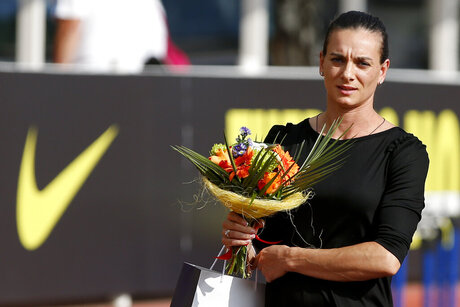 RIO DE JANEIRO (AP) — Barred from competing in Rio de Janeiro, Yelena Isinbayeva was elected as an athletes' representative on the International Olympic Committee on Thursday.

The Russian pole vaulter saw her election as a sign she retains the trust of her fellow athletes despite being part of a doping-tainted track and field team.

Isinbayeva and 66 other Russian track and field athletes were barred from the Rio Games by the IAAF following a World Anti-Doping Agency investigation detailing state-sponsored doping in Russia.

Isinbayeva, who has never failed a drug test, was in Rio as she secured an eight-year term as one of four candidates elected to the IOC athletes' commission. There were 23 candidates for the posts.

"I am very thankful to all athletes who voted for me here in Rio," Isinbayeva said in the Olympic Village. "Thank you so much for your trust, for your belief, for your support. For me it was very, very important. Today we won all together.

"Now I will work very hard for the Olympic movement. Of course I will protect the rights of clean athletes all over the world."

Isinbayeva, the world record-holder in the women's pole vault, won gold medals at the 2004 Athens Olympics and 2008 Beijing Games. She took bronze four years ago in London.

Now she will have a say in how the Olympic movement is run.

"It is very important for me because I was preparing for this Olympics for a long time and unfortunately I was not able to participate," she said. "It is kind of compensation for my competition here in Rio so I am very, very thankful."

The three other athletes elected to the IOC were Daniel Gyurta of Hungary, Britta Heidemann of Germany and Ryu Seung-min of South Korea.