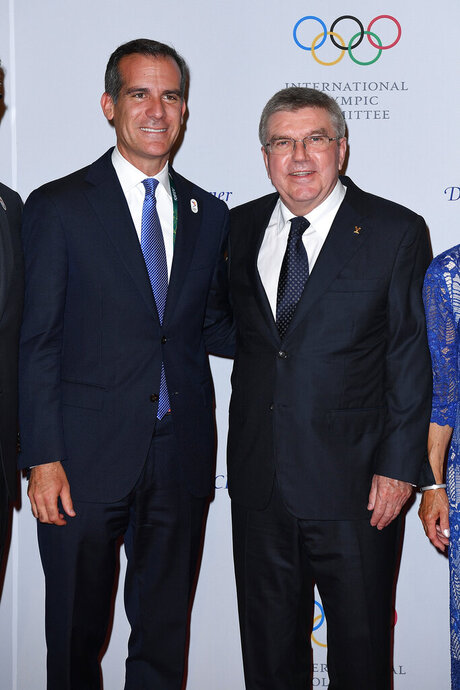 RIO DE JANEIRO (AP) — Los Angeles Mayor Eric Garcetti acknowledged Saturday that the results of November's U.S. presidential election could weigh heavily on his city's chances of hosting the 2024 Olympics, saying that a victory by Donald Trump could turn off IOC voters.

In an exclusive interview with The Associated Press, Garcetti also said Los Angeles could offer "the last best hope" for the United States to host the Summer Olympics again before the American people begin "tuning out" from the games.

Garcetti, a 45-year-old Democrat and supporter of Hillary Clinton, is in Brazil to observe the Rio de Janeiro Games and pitch his city's bid to members of the International Olympic Committee. One of the main topics of conversation with IOC delegates has been the U.S. election — and the prospects of a Trump presidency.

"I think for some of the IOC members they would say, 'Wait a second, can we go to a country like that, where we've heard things that we take offense to?" Garcetti said. "But I think that gives us even more urgency globally, where we can say, 'This is something that is a different strength maybe than the things that you've heard or the things you believe.' I think we continue no matter what the outcome of the election is."

A new U.S. president will be in office when the IOC selects the 2024 host city in September 2017. Los Angeles, which hosted the Olympics in 1932 and 1984, is competing with Paris, Rome and Budapest, Hungary.

"Everything that we're going through right now in the United States politically, I don't want us to be a country that turns into itself," said Garcetti, who spoke at the Democratic convention in Philadelphia last month. "I think we have to look outward to the world."

The IOC's 98 members come from all over the world, and Trump's comments on Mexicans, Muslims and other issues won't encourage them to vote for a U.S. city.

"They wonder, 'Is America going to take this strange turn?'" Garcetti said. "Were there to be an election result that is less international, more inward focused, maybe there's even greater urgency to a bid like this.

"But even if that doesn't happen, even the threat of that, the talk of that, the idea that we exclude people based on who they are at our borders, gives us urgency to having things like the Olympics underscore who we are and what we're about."

Los Angeles bid chairman Casey Wasserman said the city will continue to push the bid on its own technical merits.

Los Angeles is seeking to bring the Summer Olympics back to the U.S. for the first time since Atlanta hosted the 1996 Games. The bid follows failed attempts by New York and Chicago for the 2012 and 2016 Olympics, respectively.

"I don't know if this is the last best hope, but I do think that after a few bids, after a while, there will be real feeling of people tuning out in America, a new generation that isn't connected with the legacy sports," said Garcetti, who attended Rio's opening ceremony on Friday night, 32 years after going to the close of the '84 Games as a 13-year-old.

Recent American bids have suffered from anti-U.S. sentiment among some members in the European-dominated IOC, and Garcetti said he is working to change that.

"There may be a general anti-Americanism but once you create a relationship with somebody, it becomes a relationship with Eric and that person," he said. "As we get to know each other over time, they realize you can't slap a title, just like 'American' and a caricature of what that means on anybody."

"I want to listen," Garcetti said. "I don't want to just come in and say, 'We're the Americans, we get the most medals, we bring in the sponsorships. That turns people off."

He acknowledged there could be a backlash among some IOC members to what they consider U.S. meddling in global sports affairs, including the Justice Department investigation of world soccer body FIFA and the U.S. Anti-Doping Agency's call for a total ban on Russia's Olympic team over state-sponsored doping.

"I've been very careful to say, 'Look, what prosecutors or anti-doping officials do, at least in our country, is completely separate from what a mayor or a city government is about. We're not involved at all."

On other issues, Garcetti:

— encouraged Rome to remain in the 2024 race despite current opposition from new mayor Virginia Raggi, who says the city has bigger priorities at the moment. Garcetti said he has been in touch with Raggi's office to urge Rome to stay in.

"You can fix your problems first, but that doesn't mean you have to exclude great opportunities like the Olympics," he said.

— embraced the five new sports approved by the IOC for the 2020 Tokyo Games — baseball/softball, surfing, skateboarding, karate and sport climbing. While they have been added for Tokyo only, Garcetti said he would hope they could also be included in Los Angeles.

"Skateboarding and surfing, those are synonymous with LA," he said. "If we're lucky enough to win, I would absolutely see us continuing those sports."

— confirmed that the new NFL stadium being built for the Los Angeles Rams would be used for the Olympics if the city wins the bid. Rams owner Stan Kroenke is helping to build a new $2.6 billion retractable roof stadium in Inglewood, California, scheduled to be completed in 2019.

The new stadium could be considered for hosting the opening and closing ceremonies. The Coliseum would host the track and field competition.