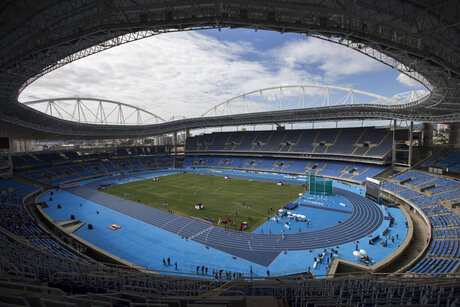 LAUSANNE, SwitzerlandCopyright 2020 The Associated Press. All rights reserved. This material may not be published, broadcast, rewritten or redistributed.
46.5166.63282

LAUSANNE, Switzerland (AP) — The Latest on the IOC executive board meetings in Lausanne (all times local):

The IOC is still hoping that major league baseball players will take part in the Tokyo Olympics if the sport wins final approval for the 2020 Games.

The IOC executive board recommended Wednesday that baseball-softball be added to the Tokyo program, along with surfing, karate, sport climbing and skateboarding. The full IOC will vote on the proposal in August in Rio de Janeiro.

He says the IOC already has assurances that professional leagues in other countries would release their best players. McConnell says "the goal is to have the best players, and we'll continue to work on that."

MLB and the players' union have said they would not interrupt the season to make room for the Olympics. Currently, players are under contracts to clubs and are not available for the Olympics.

The head of the global federation of baseball and softball has welcomed the IOC executive board's decision to recommend the sports' inclusion at the 2020 Tokyo Olympics.

World Baseball Softball Confederation President Riccardo Fraccari calls it "a great day for our millions of male and female athletes, and fans around the world."

Baseball and softball, which have been out of the Olympics since the 2008 Beijing Games, made a joint bid for inclusion in Tokyo. They were endorsed by the IOC board on Wednesday, along with surfing, karate, sport climbing and skateboarding.

The recommendation needs to be approved by the full IOC in Rio de Janeiro in August on the eve of the Summer Games.

Fraccari says "Olympic baseball and softball in Japan would be the biggest and most exciting international competition in the history of our sport, and would help the Olympic Games touch the entire host nation and worldwide community."

The IOC says a special meeting later this month will consider "collective responsibility" versus "individual justice" in dealing with any ban of athletes from the Rio de Janeiro Games.

The IAAF will rule on June 17 whether to uphold or lift its suspension of Russia's entire track and field team from global competition, including the Olympics. That sanction was imposed in November after a World Anti-Doping Agency commission detailed state-sponsored doping in Russia.

A meeting of IOC leaders, international sports federations, and national Olympic and anti-doping bodies will be held June 21 in Lausanne.

IOC spokesman Mark Adams says the meeting will consider "whether and if individual athletes should be given individual justice."

Adams says it was "pure speculation" that the meeting could pave the way for some individual Russian athletes to compete in Rio if they are deemed to be clean.

Adams says "let's wait until the IAAF comes back with its decision before we decide what happens next."

The IOC says it has set up a disciplinary commission that is working to deliver "swift decisions" on barring drug cheats from competing at the Olympics in Rio de Janeiro.

The panel is investigating the 32 positive tests in rechecks of stored samples from the 2008 Beijing Games and 23 from the 2012 London Olympics.

IOC spokesman Mark Adams says "we want to make sure any targeted athletes who have a positive result will be stopped from competing in Rio."

The IOC also decided to hold a special meeting of all key "stakeholders" on June 21 to harmonize the approach on the eligibility of athletes for the games.

The meeting will come four days after the IAAF decides whether to maintain or lift its suspension of Russia's track and field athletes from global competition, including the Rio Games.

The IOC is stepping up its drug-testing program ahead of the Olympics in Rio de Janeiro to focus on athletes from Russia, Kenya and Mexico.

The IOC executive board adopted a resolution Wednesday promising to take "further decisive action" in the fight against doping.

Its budget for pre-games testing ahead of the Rio Games will be doubled and there will be a "special focus" on countries whose anti-doping program is non-complaint with global rules, naming Russia, Kenya and Mexico.

The IOC also will widen its retesting program of stored samples from the 2008 and 2012 Olympics, saying it will target medalists from both games for possible reanalysis.

Fifty-five positive tests have already been recorded in retesting of samples from the Beijing and London Games.

IOC vice president John Coates says the executive board was unanimous in its decision to recommend the addition of five sports to the program of the 2020 Tokyo Olympics.

He says baseball-softball, surfing, karate, skateboarding and sport climbing were approved as a single package on Wednesday. They will be presented that way when the recommendation is put to a vote at the IOC general assembly in Rio de Janeiro in August on the eve of the Summer Games.

Coates says the five represent a "good balance between sports that are very popular in Japan and those better engaging youth."

He notes that baseball and softball have a huge following in Japan, and karate has a long tradition in the country.

Coates says sport climbing is an emerging sport in Europe, surfing offers a "whole new culture" to the Olympics and skateboarding is particularly appealing to youth.

He says NBC, which holds the U.S. TV rights to the Tokyo Games, has suggested holding opening skateboarding events on the eve of the opening ceremony.

Olympic leaders have recommended the addition of baseball-softball and four other sports to the program of the 2020 Tokyo Olympics.

IOC executive board member C.K. Wu tells The Associated Press that the board backed the proposed inclusion of the combined baseball-softball bid, as well as surfing, karate, skate boarding and sport climbing.

The decision, which was widely expected, came Wednesday on the opening day of a three-day board meeting in Lausanne.

The five sports were presented as a package.

The recommendation will go to a vote of the full International Olympic Committee at its general assembly in Rio de Janeiro in August on the eve of the Summer Games.