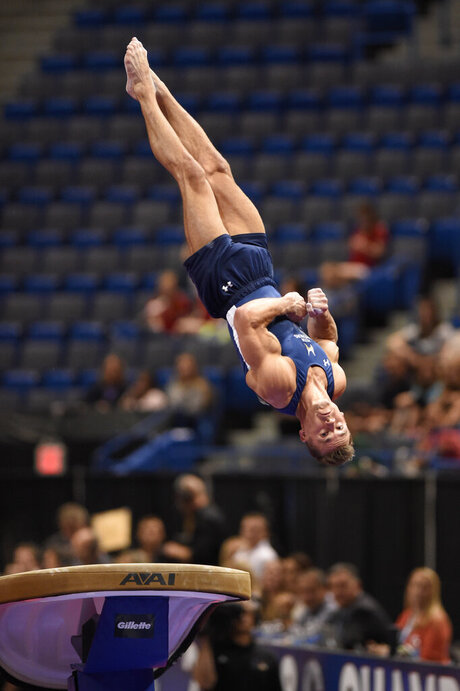 By: PAT EATON-ROBB (AP)
HARTFORD, Conn.Copyright 2020 The Associated Press. All rights reserved. This material may not be published, broadcast, rewritten or redistributed.
41.7637-72.6851

His mind is on Rio.

The 23-year-old Olympic veteran used a steady performance Sunday at the U.S. Championships to become the first man to take the national title in four consecutive years since Blaine Wilson won five straight in the 1990s.

Mikulak, who is back from a partially torn left Achilles tendon that kept him out of last fall's world championships, broke into a huge smile after sticking the landing on his vault to ensure the victory. But he was his own worst critic after the competition.

"I'm very happy to still be winning, but I want to do better routines," he said. "I've been doing so much better in the gym. I want to unleash those awesome routines that I've been doing in training."

Eighteen men will go from this competition to compete in the Olympic trials later this month in St. Louis, where they will vie for spots on the five-member Olympic team competing in Rio de Janeiro in August.

But the only way to guarantee a spot on that team is to have one of the top two all-around combined scores from this competition and the trials and to be in the top three in three of the six individual events after those competitions.

Mikulak may not manage that — his best finishes were second on the parallel bars and pommel horse — but his performance solidified his position as the nation's top all-around male gymnast.

Brooks and Dalton, who have both been battling shoulder problems, also have an outside shot at a guaranteed spot.

Brooks made a huge statement on Sunday as he makes one final push at age 29 to get onto an Olympic team. He nailed his parallel bars routine, letting out a yell as he finished with a 15.8, then took the all-around lead on the fourth rotation, putting up a 15.9 on the high bar. That was good enough for second place in that event, behind Paul Ruggeri, who posted a 16.0, the day's top individual event score.

Brooks dropped to second after an average pommel horse routine and said he needs to improve on that apparatus, the weakest for the U.S. at the trials.

"As far as the Olympics goes, this is my last shot," he said. "So it feels like a little bit more pressure."

Dalton, who like Mikulak missed the world championship team last fall because of an injury (shoulder surgery), won the floor exercise and was the co-champion in the vault. He finished third on the rings.

"It gives me a little more confidence knowing that not only am I back on those events, but I've improved on other events," he said.

Ten gymnasts finished within five points of the lead.

"It was good to see so many guys hitting so many routines at a high level," said Kevin Mazeika, the men's national team coordinator. "I can tell you they are not making it any easier on us, but that's a good thing. Olympic trials in St. Louis is going to be just an incredible battle."

Twenty-one-year-old Donnell Whittenburg, who held a slim lead after the first day of all-around competition on Friday, slipped into a tie for fifth place, despite winning the rings.

He had a solid first routine on the parallel bars, scoring a 15.4. But Mikulak followed him on that event and took the lead with a 15.5, despite taking two big steps on his landing.

On the second rotation, Whittenburg missed a grab during his high bar routine, falling to the mat and scoring a 14.0. Mikulak saved a catch with his fingertips on the high bar and scored a 14.7, but he was much better on the floor, pumping his fist after a 15.4.

He had even better routine on the pommel horse, scoring a 15.5 to extend his lead.

"When the all-around is as intense as it was this competition, it's just a big statement for how any (Olympic) team we put together, how strong it's going to be," he said.

Yul Moldauer, the NCAA all-around champion from Oklahoma who finished fourth. He will join Mikulak, Brooks, Dalton and Whittenburg on the U.S. national team that was named after the meet. Others on that team include Ruggeri, 2015 NCAA champion Akash Modi, Eddie Penev, Alex Naddour, C.J. Maestas, John Orozco, Marvin Kimble and Sean Melton.

Two-time Olympian Joathan Horton missed the championships and will miss the Olympics with a shoulder injury suffered early this year.