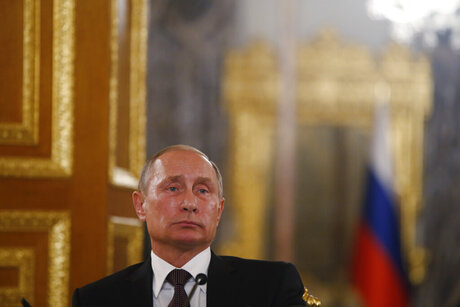 MOSCOW (AP) — Russian President Vladimir Putin said Tuesday that therapeutic use exemptions for banned substances give an unfair advantage, and suggested athletes who use them should be excluded from major competitions.

TUEs allow athletes with medical conditions to take medications that would usually be banned. Their use has been under scrutiny since a hacking group known as Fancy Bears released confidential World Anti-Doping Agency documents listing medical information for many athletes.

"We need to understand what to do about (TUEs), otherwise we could soon face all records and victories going only to people who are ill with, let's say, chronic illnesses," Putin said, speaking at a sports forum in Russia.

"Maybe they can be put in a special category, or their achievements, points, seconds and honors can be considered in a special way," he said.

Travis Tygart, the CEO of the U.S. Anti-Doping Agency, called Putin's stance "laughable, as the entire world has agreed to allow athletes to use medication for documented health needs like birth control, acne, life-saving surgery or established asthma." When approved as required, Tygart said, none of the medicines gives a performance-enhancing advantage.

"It either shows a clear misunderstanding of the rules or it's another attempt to smear innocent athletes in response to the uncovering of Russia's state-sponsored doping system that gave athletes a tremendous performance advantage and corrupted the Sochi Olympic Games," Tygart said.

Two independent investigations detailed state-sponsored doping inside the Russian sports program, one of which found evidence that dirty Russian urine samples at the Sochi Games had been exchanged with clean ones.

At a later meeting Tuesday with sports officials, Putin said all TUEs should be made public, a move that could face significant resistance from athletes, as well as possible legal obstacles related to the confidentiality of medical records.

If athletes don't want their medical status made public, "then they shouldn't be competing in high-level sport."

Putin did not address WADA's allegation that the documents were released by hackers linked to Russia. International Olympic Committee President Thomas Bach said last month that he would ask "the Russian authorities" for help to put a stop to the hacking.

The Fancy Bears group began posting medical records of Olympians online last month, with U.S. and British athletes making up a large proportion of those targeted. Only selected records have been released. It is not clear how many have been held back and for which reasons.

Many of the athletes named in the files have said their medicines are necessary for their health, while others have pointed to TUEs issued as a result of a medical emergency such as a sudden collapse or anaphylactic shock. A substantial minority of the TUEs that were leaked date back several years and concern substances that were closely regulated at the time but are no longer considered potentially performance-enhancing if not abused.

Tour de France winner Bradley Wiggins' use of a TUE for three injections of an anti-inflammatory drug has prompted scrutiny in Britain, though he denies gaining an advantage.

Only one Russian, boxer Misha Aloyan, is among the dozens of athletes whose information has been leaked. However, many more Russian athletes are believed to have used TUEs.

Putin said last month that "we don't support what the hackers have been doing, but what they have done can't fail to attract public attention internationally."

The leaks began a month after the Olympics in Rio de Janeiro, from which many Russian athletes were banned following the investigations into state-sponsored doping. The entire weightlifting team was excluded, while only one track and field athlete was allowed to compete.