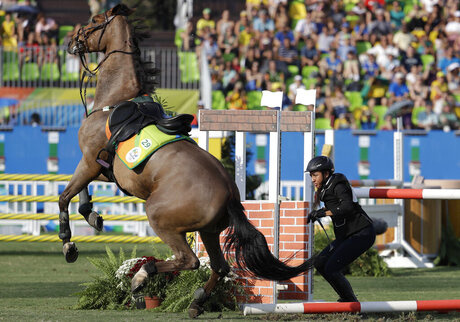 RIO DE JANEIRO (AP) — The Paralympics will go ahead in Rio next month but organizers say deep budget cuts mean one venue will close down, facilities will be dismantled and the workforce will be reduced.

Poor ticket sales have compounded existing financial challenges in recession-battered Brazil that have already hit operations at the Rio Olympics, which close Sunday.

Rio has less than three weeks to prepare for Paralympics, the pinnacle of the disability sport calendar where organizers hoped to build on progress made at the well-attended games in London four years ago. But Rio organizers have reported sales of just over 290,000 tickets for the Sept. 7-18 Paralympics.

"At this point, it is difficult for us to expect the full venues that we saw in Beijing or London, or expect to see in Tokyo in four years' time," International Paralympic Committee President Philip Craven said Friday.

The IPC said it has already sought to reduce costs over the last year and the new, deeper "major budget cuts" will affect every team and visitors to the games.

"Never before in the 56-year history of the Paralympic Games have we faced circumstances like this," Craven said. "Since becoming aware of the full scale of the problem, we have focused all of our efforts on finding solutions to the problems."

The IPC has secured an additional 150 million reals ($47 million) in funding from Rio mayor Eduardo Paes and said the government will bring in up to 100 million reals ($31 million) of sponsorship from state-run companies.

But the workforce for the Paralympics will still be reduced, transport services cut and media centers closed. The wheelchair fencing competition will move to a new venue, allowing the Deodoro Olympic Park to be closed and dismantled.

Grants of more than $7 million that the Rio Olympic organizers were due to make to the 165 participating countries in the Paralympics are almost a month overdue. The first athletes are due to arrive Aug. 31, although there will be no Russians after the country was suspended from the IPC over its state-sponsored doping scheme.

"Currently we have around 10 countries who, even if the grants are paid, may struggle to cover the cost of their travel to the games," Craven said. "The IPC is working with them to find solutions and ensure their participation here in Rio."

"London 2012 proudly showed the world what was possible and we want Rio to be the next stage of that positive journey," the British Paralympic Association said. "The IPC's announcement makes clear that there is major risk to that."

This version corrects the name of the stadium to Deodoro.