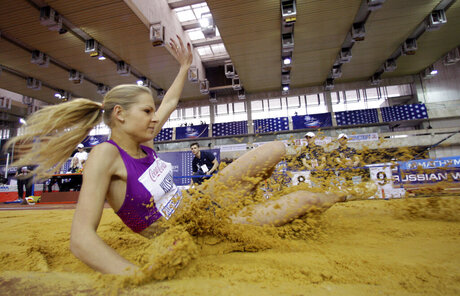 By: NATALIYA VASILYEVA (AP)
MOSCOWCopyright 2020 The Associated Press. All rights reserved. This material may not be published, broadcast, rewritten or redistributed.
55.752237.6156

MOSCOW (AP) — Russian long jumper Daria Klishina is facing a barrage of criticism at home for agreeing to compete under a neutral flag.

Because Russian track and field athletes were suspended globally following state-sponsored doping, the U.S.-based Klishina was given permission by the IAAF over the weekend to compete as a neutral athlete because she met "exceptional eligibility criteria."

But that enraged some Russians, who called her a "traitor," and pointed out she lives and trains abroad.

One social media account published her picture in a leaflet that was reminiscent of Nazi propaganda that encouraged collaboration in the occupied territories of the Soviet Union.

"Russian athletes, the only thing you have to do in order to compete in the Olympics is to give up the banner of your country," the leaflet said. "Do give up the shameful Russian flag!"

"They've allowed only one Russian, the long jumper Daria Klishina, to compete at the Olympics only because she trains in the United States," veteran sports journalist Nikolai Dolgopolov wrote. "How silly is that?"

Klishina dismissed the criticism in a piece published by the All-Russia Athletic Federation, and said she hopes other Russians will be cleared.

"It is not like I started training in the United States with an American trainer a month ago," she said. "I have been there for three years now, that is why I think it is wrong to accuse me and call me a traitor of the motherland. I still hope that it won't be just me who gets to go to Rio."

More than 80 Russian athletes have applied for clearance from the IAAF, and only Klishina and doping whistleblower Yulia Stepanova have had their requests accepted.

The IOC has yet to allow them to compete in the Rio de Janeiro Games.

Dmitry Peskov, the spokesman for Russian President Vladimir Putin, sought to lower the tensions on Monday.

"It's not the right time for emotions, it's time for legal actions that we are undertaking," Peskov said. "Court decisions are pending. Russian athletes and those who represent them will use all legal means at their disposal and fight till the bitter end."