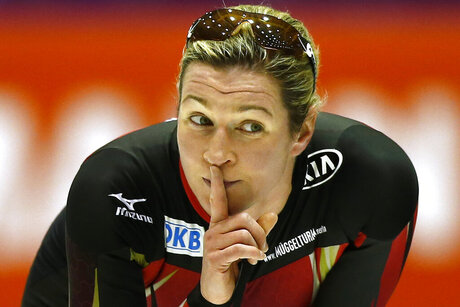 LAUSANNE, Switzerland (AP) — The authority of the highest court in global sports will be at stake Tuesday when a potentially landmark verdict is announced in Germany.

The Court of Arbitration for Sport is not even a formal party in the quest by five-time Olympic speedskating champion Claudia Pechstein to get 4.4 million euros ($5 million) in compensation from the International Skating Union, which banned her in 2009 for blood doping. She denied doping and claimed her irregular blood values were due to an inherited condition

Still, the ruling by German federal judges could affect the position of CAS as world sport's recognized authority to judge appeals, arbitration cases and contract disputes.

"If we win it is clear that athletes will no longer be forced to submit to the CAS, as long as CAS is based as it is," a lawyer for Pechstein, Thomas Summerer, told The Associated Press.

The core of Pechstein's case is that CAS is biased in favor of the sports establishment — the International Olympic Committee and governing bodies — and against athletes and individuals who are obliged to respect the court's authority.

Pechstein, now 44 and still competing, could only challenge her doping ban at CAS. She also lost a subsequent appeal at Switzerland's supreme court, which can overturn CAS verdicts if legal process was abused.

Even if she wins Tuesday, CAS would not be shut down. She will win if federal judges dismiss the skating body's appeal against a German regional court ruling that let her pursue a civil damages suit outside of sports' jurisdiction.

The key would be any recommendations for change that German judges might make to the court based in the Olympic home city of Lausanne since its creation in 1984.

"They would not be binding on us but they would be taken into consideration by the ICAS," the court's secretary general, Matthieu Reeb, told the AP in an interview.

The 20-member ICAS, the International Council of Arbitration for Sport, took over running the court in 1994 from the IOC. That move was provoked by a Switzerland supreme court ruling that the CAS was not truly independent.

Today, the ICAS appoints lawyers to a closed list of around 400 approved arbitrators. It also picks the chair of a three-member judging panel after both parties select a judge from the list.

That is weighted in the establishment's favor, say Pechstein and FIFPro, the international group of soccer players' unions which has paid toward her legal bills.

"Pechstein is breaking new ground," FIFPro said in a statement. "Few cases challenging the authority of CAS, which must be reformed, have advanced this far. It highlights the need for fair, independent, swift and accessible arbitration."

Underdogs have beaten the system to win notable cases at CAS.

Supporters of CAS say it has changed since 2009, when current President Thomas Bach headed the appeals division overseeing the appointment of judges. Bach was not involved in the case of his German compatriot Pechstein.

The ICAS now includes more former Olympic athletes, and two of its members, Dick Pound and Moya Dodd, are among the most outspoken and pro-reform officials at the IOC and FIFA, respectively. However, athletes have no formal input in the process of approving judges

Swiss lawyer Stephan Netzle has been on both sides of the CAS chamber. As a judge, he was on the 2009 panel that ruled against Pechstein, who denied doping and claimed irregular blood values were due to an inherited condition. As a defense lawyer, he helped Mohamed bin Hammam of Qatar overturn a life ban by FIFA for alleged bribery.

Netzle believes CAS would be fairer if the currently closed list of arbitrators was opened up.

"You would take out a lot of criticism, or grounds for criticism, if you just say: 'Choose whoever you want,'" Netzle told the AP, suggesting 90 percent of the same lawyers would be picked.

Reeb believes that would harm the consistency of case law at CAS, which he said "answers a need in international sport."

"I don't feel like it is a big attack to sink the CAS forever," the Swiss official said of the Pechstein case. "It is one athlete fighting against one decision she feels is unfair."