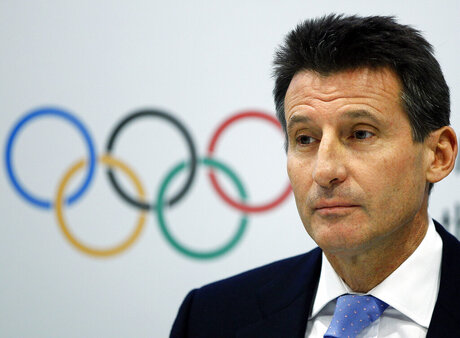 RIO DE JANEIRO (AP) — Entrusted with cleaning up a sport mired in sleaze and doping deceptions has proved far trickier for Sebastian Coe than the pursuit of gold on the track.

It's a year since Coe's misguided pronouncement that Lamine Diack, his predecessor as president of the International Association of Athletics Federation, was the "spiritual leader" of athletics.

Disowning Diack, now discredited as the alleged architect of a doping blackmail scheme, was the easy part. Cleaning up the mess he left behind at the IAAF has proved more challenging.

Coe has had to overhaul a tarnished governing body while confronting the biggest doping scandal in the sport's history and persistent questions about his knowledge of the wrongdoing.

"The last year has sorely tested all of us," Coe said Wednesday. "It has sorely tested our fans and supporters out there ... it's our responsibility now to make sure we never return to what we have been dealing with."

In Rio de Janeiro, Coe has looked like the standard-bearer for the anti-doping fight, standing alone in the Olympic world as the sports federation leader advocating a blanket ban on Russian athletes as punishment for the country's state-sponsored doping scheme.

"It's been a really strange year," European athletics head Svein Arne Hansen told The Associated Press. "Seb is a tough guy ... he has been the right man on the job, even in this extremely difficult time he has been a leader."

At times that leadership has seemed shaky.

The chief organizer of the 2012 London Olympics tried to tough out disapproval of his personal contract with Nike that was retained followed his election last August. The conflict of interest questions didn't go away. Three months later, with pressure growing, Coe relinquished his ambassadorial role with the sportswear giant and also announced the sports-marketing company he chairs would not tender for IAAF work during his presidency.

"He had what you could call a mare for three of four months after he had taken over but he has recognized that," said former British sports minister Hugh Robertson, a Coe associate, adopting a British colloquialism for a bad situation.

"But you expect ... to take a bit of flak and that's the way it is. Most of us wouldn't have it any other way."

Much of the flak for the former Conservative Party legislator has come from a British parliamentary committee.

Coe was summoned there in his first year as IAAF president to be quizzed by combative legislators. Questions were posed to Coe about his apparent lack of inquisitiveness and curiosity in asking Diack about talk of corruption in track and field while serving as an IAAF vice president.

Damian Collins, the acting chairman of the culture, media and sport committee, wants Coe back to appear at another hearing to scrutinize denials that he was aware of details of a Russian doping corruption case four months before it became public in 2014. Coe maintains he never read the e-mail under question, instead forwarding it to the IAAF ethics body.

"There are still questions that remain unresolved," Collins said by telephone. "It's been a terrible year for athletics and most of the pressure to change and most of the force to change has come from whistleblowers and WADA ... that what remains incredibly disappointing.

"More needs to be done to give people the confidence that international federations and the IOC will act with sufficient rigor to clean up sport."

And yet to Coe's allies, he has done just that by kicking all but one Russian track and field athlete out of the Rio Olympics as punishment for the country's state-orchestrated doping program that encompassed the 2013 world championships.

Coe insists that he is starting to put the IAAF back on the right track, with reforms being implemented to separate the business and sports responsibilities of the governing body while ensuring commercial backers don't walk away.

"We have stabilized many of the sponsors that were clearly nervous last year," Coe said. "And why wouldn't they have been?"