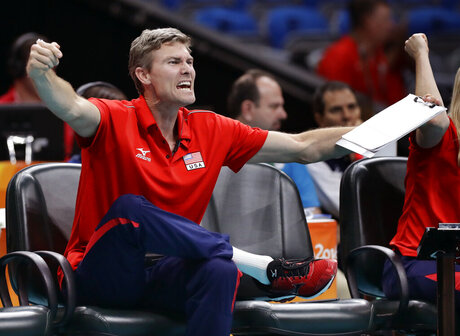 By: JANIE McCAULEY (AP)
RIO DE JANEIROCopyright 2020 The Associated Press. All rights reserved. This material may not be published, broadcast, rewritten or redistributed.
-22.9028-43.2075

RIO DE JANEIRO (AP) — Matt Fuerbringer watches intently during warmups, first with hands on hips before he briefly crosses his arms then immediately moves them behind his back. After that, it's a thumbs-up to four-time Olympian Reid Priddy and a high-five with David Lee.

A quick hug and handshake for technical coordinator Nate Ngo.

The top assistant men's volleyball coach for the U.S. team adjusts his headset well before the first ball is struck, then is right in the huddle during timeouts and hollering from the bench, fingers clasped around a clipboard.

This is the Olympics Fuerbringer never had as a player. He came close to making the beach team for London four years ago.

A former standout player both indoors and on sand, the 42-year-old Fuerbringer has been the reliable right-hand man for John Speraw as he balances dual coaching roles with the national team and UCLA.

The U.S. lost a thrilling five-set semifinal to Italy on Friday, the Americans' four-game winning streak snapped since a loss to Italy in the second match of pool play. They will play Sunday morning for bronze.

Fuerbringer is the brainchild behind their blocking defense.

"That's a really important role for an assistant coach but particularly in this situation when I'm managing two programs," Speraw said.

It was Fuerbringer who first texted setter Micah Christenson with an invite into the U.S. gym when another body was needed for training.

"He's definitely the most relatable in the volleyball sense. He has a great mind for volleyball. We really respect what he says," Christenson said. "He's doing all of that dirty work."

While he is enjoying being part of the indoor team's run in Rio, Fuerbringer still couldn't wait to steal away to Copacabana beach and root for his old beach volleyball partner, Nick Lucena.

He got a thrill watching Lucena on the sand alongside Phil Dalhausser before they were eliminated in Monday's quarterfinals, and they hung out Sunday.

For the indoor team, not only is Fuerbringer the eyes for Speraw as needed, he makes at least one trip each winter to check up on the American players abroad with their professional club teams.

"Of the whole staff, he's the one who's kind of been there and done that," Ngo said. "He played on the indoor national team and had an awesome career on the beach, so his ability to relate to the guys and know what they're going through in a big moment, he's been in those situations."

Lee counts on Fuerbringer to discuss ideas and strategy in the middle of matches, during training or off the court.

When the Americans dropped their first two games in Brazil, Fuerbringer and the staff stressed the basics: "Get back to just focusing on effort and not the results."

"It's great to have a guy who's competed at the highest level and knows what we're going through, and he obviously brings a big impact to our blocking defense," Lee said. "So that means I have a lot of discussions with him. He's always there for me to figure out what to do on the next play."

Fuerbringer said everyone on staff has helped in key moments during this Rio run.