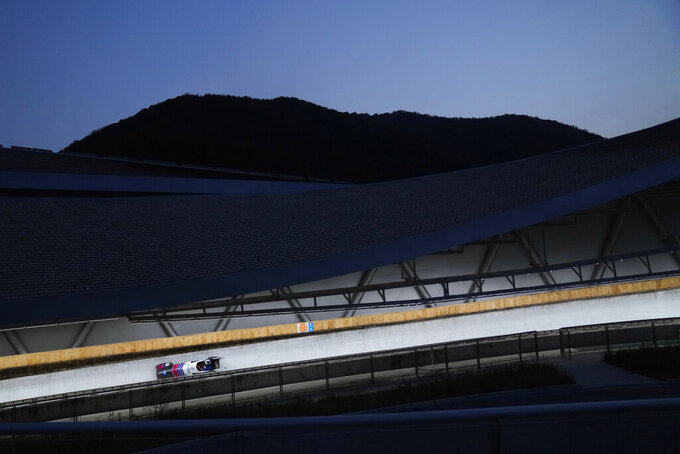 An athlete competes in the women's monobob during an IBSF Sanctioned Race, a test event for the 2022 Winter Olympics, at the Yanqing National Sliding Center in Beijing, Monday, Oct. 25, 2021. Beijing Olympic officials say two foreign athletes have tested positive for COVID-19 in ongoing test events for February's Winter Games, Officials also expressed sympathy for a Polish luge competitor who fractured his leg at the Olympics sliding center this week in a crash that has been blamed on human error. (AP Photo/Mark Schiefelbein)

They also expressed sympathy for a Polish luge competitor who cracked his left kneecap and suffered deep cuts on his right leg at the Olympic sliding center this week in a crash that has been blamed on human error.

The two who tested positive are among 1,500 competitors and staff who have come into the country since the test events began in early October, said Huang Chun, the deputy director general of the pandemic prevention office for the Games.

He didn't identify them or their country, but said they had come on a chartered plane for luge training and the World Cup. Neither showed symptoms and both were allowed to train, but they had to stay in a quarantine hotel and eat their meals alone.

Athletes from many nations, including the U.S., took a charter that was organized by the International Luge Federation into Beijing earlier this month for the luge training weeks and upcoming World Cup.

China has among the strictest COVID prevention policies in the world. Entry to the country is restricted, and virtually everyone who does must quarantine in a hotel for at least two weeks, even if they are vaccinated and test negative.

The quarantine requirement is being waived for the test events and the Games, but participants must live and compete in isolation from the rest of the population in China. The athletes speak to Beijing-based media over video, not in person.

“Closed loop management not only serves the Games well, but also prevents further spread of the virus," Huang said. "This is our goal.”

Polish luge competitor Mateusz Sochowicz, who was 20th in last season’s World Cup rankings, crashed into a gate that should have been open on Monday at the sliding center in Yanqing, the city where the downhill ski events will also be held.

“We express our sincere sympathy to the injured athlete," said Zhao Weidong, the director general of the media department for the Games. “No one wants to see athletes injured.”

Yao Hui, the director of venue management, declined to provide further details on the crash beyond what has been released by the FIL and the Beijing Organizing Committee.

He said that medical workers were on the scene within three minutes and that an ambulance took Sochowicz to a hospital in 19 minutes despite the mountainous terrain. He was expected to be discharged from the hospital Friday, Yao said, although Polish officials have said Monday is the more likely target for Sochowicz's release.

By Joe Reedy an hour ago
By Anne M. Peterson 7 hrs ago
By Dave Skretta 10 hrs ago
By Samuel Petrequin 11 hrs ago
By Tim Reynolds 11 hrs ago