At 40, US downhill racer Nyman still going full speed ahead 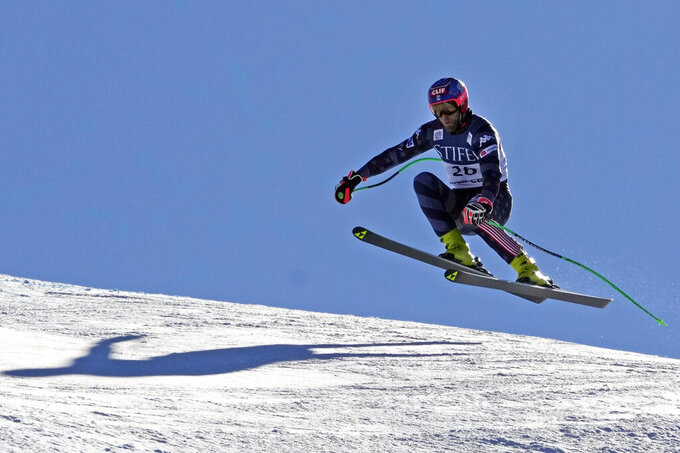 BEAVER CREEK, Colo. (AP) — On occasion, fellow ski racers have been known to refer to Steven Nyman as “Old Man.”

Mostly, though, they go with “Sven” (a shortening of his first name) or “Nymonster” (a play on his last).

Or, he jokingly adds: “They just call me impressive.”

Now 40 years old, the American downhill racer from Utah is still speeding along with no plans of slowing down (translation: retire) anytime soon. Sure, his back sometimes aches but it’s not enough to deter him from chasing after the feeling of a perfect race.

It's been a pursuit since he made his World Cup debut in 2002. A pursuit that’s led to two Achilles injuries, two ACL tears, breaks in both legs and hand surgery. A pursuit that's also resulted in three World Cup wins and enduring memories as he and his teammates return to their home course in Beaver Creek, Colorado, this weekend for two downhill races and a super-G.

“This is a really good life, man,” said Nyman, who finished a downhill training run Wednesday 2.95 seconds behind the top time of Otmar Striedinger of Austria. “I’ll continue to do this as long as I feel like I’m capable and competitive. I love the challenge. ... It keeps me young."

Mention anything age-related and Nyman gently points out he’s not the oldest one out there taking on the demanding Birds of Prey course. That distinction belongs to France’s Johan Clarey, who turns 42 in January and tied for the fifth-fastest time in training Wednesday. Clarey was a surprise silver medalist in the downhill at the Beijing Olympics last February.

“I enjoy that medal more than if I was 21, because of all the hard work and resilience,” said Clarey, who plans to make this his last season on the circuit. “I would say to (Nyman), that as long as he’s enjoying training, and he’s enjoying skiing and competing, of course, he has to go on."

What really keeps Nyman going is purely internal — that sensation when everything comes together in a race. He felt it during a stretch eight years ago. He won a downhill at Val Gardena in December 2014 by beating retired Norwegian standout Kjetil Jansrud by 0.31 seconds and the rest of the field by more than a second.

Then, nearly two months later at the world championships in Beaver Creek, Nyman finished fourth in a downhill despite a massive headwind on his turn to zoom down the mountain.

“The search for that performance is such a motivator,” Nyman said. “I just like being among a bunch of people that are trying to become the best they can be and pushing each other to the highest heights. But it’s hard.”

To keep going, that is.

Because of family. He and his partner, Charlotte, have two daughters, Nell, 5, and Ayla, 2. In years past, they would join him in Europe. Charlotte has a job at a new resort and they’re staying in Utah. They will join him when they can and he will fly home when the schedule allows.

“I would do this as long as I possibly could," Nyman said. "But there’s a lot of stuff that weighs not just on what I desire and what I want."

Any promises to his family of keeping things safe in an event where the speeds can reach around 80 mph (128 kph)?

“Downhill is not safe,” Nyman said with a laugh.

His injuries offer proof of that.

He tore his left Achilles in 2011, the right one in 2020. There's been the broken legs that required rods, plates and pins (and more surgeries to remove them). He's needed total reconstruction of his left knee, when it took four or so hours to repair his ACL, MCL and PCL, and another ACL repair on his right.

Over his career, all three of Nyman's World Cup wins were in Italy. He’s raced at three different Winter Olympics, with his best finish a tie for 19th in the downhill at the 2006 Turin Games. He made a fourth U.S. team, but sat out the 2018 Pyeongchang Games due to a knee injury suffered a month before the Olympics.

“Obviously I have the deck against me right now, with my age and what-not," Nyman said. "But I feel fit and I feel good.”