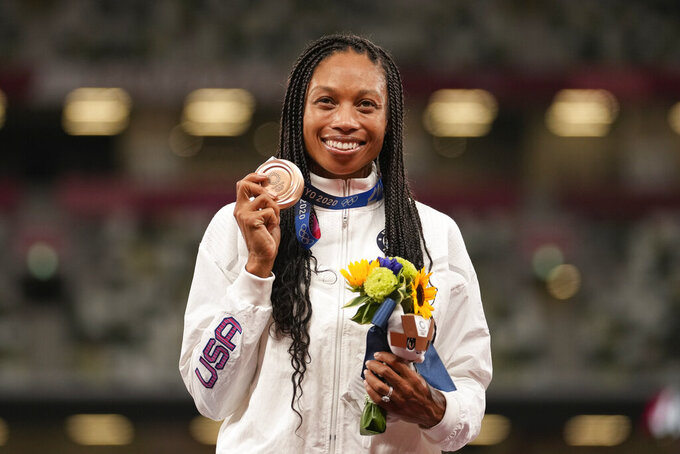 Bronze medalist Allyson Felix, of the United States, poses during the medal ceremony for the women's 400-meter run at the 2020 Summer Olympics, Friday, Aug. 6, 2021, in Tokyo. (AP Photo/Martin Meissner)

TOKYO (AP) — The U.S. women's basketball team will be playing for a record seventh gold medal Saturday night when the Americans play Japan at the Tokyo Games.

Track and field competition comes to a close on Day 15 of the Olympics and Allyson Felix, fresh off her record-setting 10th medal, will try to pass Carl Lewis as the most decorated American runner if she participates in the 4x400 meter relay. The U.S. men's team will also try to medal in the 4X400 relay, and Vashti Cunningham is expected to contend for a gold medal in the women’s high jump.

Sue Bird and Diana Taurasi will try to lead the U.S. women's basketball team to a seventh consecutive gold medal when the Americans play Japan in the Olympic final.

Bird and Taurasi will be going for a record fifth gold — an achievement no other basketball player has ever accomplished.

Japan has already assured itself the first Olympic medal in women’s basketball in the country’s history. Coach Tom Hovasse had said when he was hired a little over four years ago that his team would be playing against the Americans for gold at the Tokyo Games.

Allyson Felix became the most decorated female track and field athlete in Olympic history with a bronze medal in the 400 meters and said after her run she expects to be part of the women's 4X400 relay team.

If she is and the Americans medal, it would be the 11th of Felix's career and move her past Carl Lewis as the most decorated track and field athlete in U.S. history.

At 35 years old, Felix knew coming into Tokyo that collecting any hardware would be the biggest challenge of her career.

“I always believe in myself. I trust my training,” Felix said. “But of course I’m also a fan of the sport, I hear the chatter. I think people thought that it was a longshot for me to even be on the U.S. team and I knew I wasn’t a pick for the medals. But, you know, just give me a shot.”

The relay participants aren't announced ahead of time but the women's squad could consist of Sydney McLaughlin, who set the world record in the 400-meter hurdles, and Dalilah Muhammad, who finished second.

The final day of track and field will be streamed live on Peacock at 6:35 a.m. with encore coverage on NBC in primetime beginning at 8 p.m.

The U.S. seeks its first gold medal ever in women’s volleyball when the Americans take on Brazil in the finals.

The United States has won three silver medals and two bronze since 1984, but has never stood at the top of the podium at the Olympics. The Americans lost to Brazil in 2008 and ’12 and to China in 1984.

U.S. coach Karch Kiraly is looking to join China’s Lang Ping as the only Olympians to win gold as a player in volleyball and also a coach. His team is led by three-time Olympians Jordan Larson and Foluke Akinradewo Gunderson, who have already won silver and bronze medals. The game will be aired live at 12:30 a.m. on USA Network.

The U.S. women’s water polo team goes for its third straight gold medal when it faces Spain in the final at the Tatsumi Water Polo Centre.

Spain is looking for its first gold medal in women’s water polo. It lost to the U.S. in the final of the 2012 London Games. The game will first be aired live at 2 a.m. on USA Network, with replays in late morning coverage on NBC and again in primetime.

Mike Scioscia is one win from matching mentor Tommy Lasorda, the only manager to lead the United States to a baseball gold medal.

But host Japan, which stopped its major league season during the Tokyo Olympics, is the favorite in the gold medal game.

The U.S. is a mixture of prospects mostly from Double-A, career minor leaguers and released veterans. The Americans overcame a blown ninth-inning lead in a 7-6, 10-inning loss to Japan to reach the final by beating the Dominican Republic 3-1 and South Korea 7-2.

Nick Martinez will start for the U.S. The 31-year-old right-hander pitched for Texas from 2014-17, then spent three seasons with the Pacific League’s Hokkaido Nippon-Ham Fighters before switching this season to the Fukuoka SoftBank Hawks.

Martinez got the opening-round win over South Korea, allowing one run and four hits in five innings with nine strikeouts. He is familiar with Yokohama Stadium from his time in Japan. The game is live Saturday morning at 6 a.m. on NBC Sports Network.

Nelly Korda takes a three-shot lead into the final round of the women's golf tournament.

Olympic golf officials plan to start play as early as possible Saturday and take advantage of a window they hope is big enough to squeeze in 72 holes before a tropical storm in the forecast arrives. The round is scheduled to be aired live beginning at 6:30 a.m. on the Golf Channel.