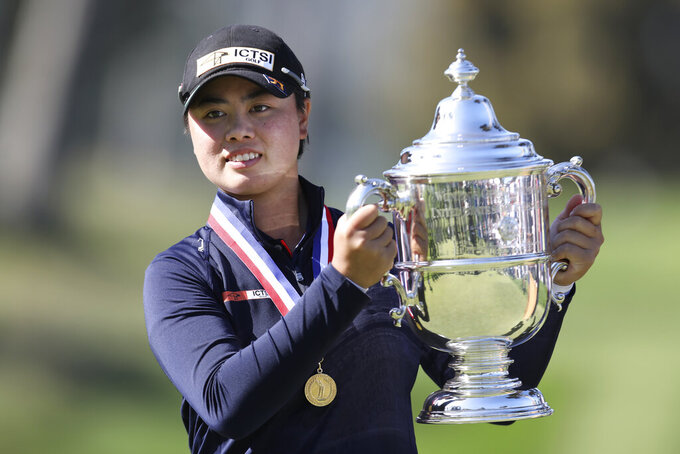 FILE - Yuka Saso, of the Philippines, celebrates her victory in the U.S. Women's Open golf tournament at The Olympic Club, June 6, 2021, in San Francisco. Saso says the last two years from turning pro to winning the Women's Open have felt like a blur. (AP Photo/Jed Jacobsohn, File) 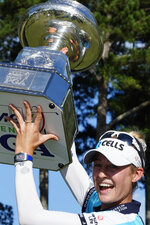 Yuka Saso finally had time to reflect on her breakthrough year, and it still felt like a blur.

Winning the U.S. Women's Open with a birdie on the third playoff hole at Olympic Club was a life-changer. Meeting her golf idol, Rory McIlroy, the following week during the U.S. Open at Torrey Pines might have been even more memorable.

“Meeting Rory was my dream,” she said with a laugh. “But I was happy I won the U.S. Open.”

But when Saso says it's hard to grasp her success, that goes beyond winning the Open for the 20-year-old of Filipino and Japanese heritage.

It was only two years ago when she turned pro after earning a Japan LPGA card. She was just getting started when the pandemic began and shut down golf for nearly five months.

When she returned, Saso tied for fifth in Japan, and then the next four JLPGA events were canceled. She won the next Japan event for her first pro victory, and after another event was canceled, she made it two in a row by winning the Nitori Ladies.

As her world ranking improved, Saso began getting into majors, and she cashed in at Olympic after Lexi Thompson fell apart on the back nine.

Major champion has a nice ring to it. But it was a lot to take in.

“Everything happened too fast,” Saso said in a telephone interview. “I still have a lot to learn from the other pros. I think I have the game to be able to win tournaments, but I feel like there's still things I can improve on to be a better golfer.”

There have been tales over the years of players winning majors early and then feeling as though they have to live up to their new status. Saso doesn't think that will happen to her.

“Winning a major doesn't affect how I think,” she said. “To stay the way I am before winning a major should be able to help me stay grounded.”

Saso has time on her side. She knew that winning the Women's Open would give her status on the LPGA Tour. She just didn't realize it came with a five-year exemption, and her reaction at Olympic upon hearing the news was refreshingly honest.

“Five years is a big deal. It was my dream to play on the LPGA,” Saso said.

She starts next year with a new endorsement deal with AXA Asia and Africa, the first time the global insurer has partnered with an Asian sports champion on a regional level. This wasn't simply the spoils that come with winning.

Saso says the company reached out to her through Instagram earlier in the year.

“I didn't know if it was real because it was an Instagram message,” she said. “I emailed and they said, ‘Yeah, happy to hear from you.’ It was in the middle of the season, and I had tournaments to play, so I wasn't able to go through it. But that gave me confidence that some big company was interested in me, and I wanted to play better. Because at the time, I thought having those two wins in Japan wasn't enough. And then soon after, I won the U.S. Open.”

For this late in the year, it would be hard to find anyone in golf having a better week than former U.S. Open champion Geoff Ogilvy.

It started in the Chicago suburbs when Medinah Country Club voted overwhelming to approve the plan of OCM Golf for a $23.5 million renovation of its fabled No. 3 course. OCM stands for Ogilvy, Mike Cocking and Ashley Mead, a golf architectural firm based in Australia. The renovation, which will include three new holes, is expected to begin in 2023 and be ready in 2024.

Medinah has hosted three U.S. Opens, two PGA Championship, one Ryder Cup and most recently had the BMW Championship in 2019. Next up is the Presidents Cup in 2026 (Ogilvy was an assistant captain in 2019 at Royal Melbourne).

“It’s a huge sign of confidence that the members are as excited with our concept as we are,” Ogilvy said.

Later in the week, Ogilvy and Mike Clayton hosted the Sandbelt Invitational, which put together a mixed tournament over four renowned Sandbelt courses in Melbourne — Kingston Heath, Royal Melbourne (West), Yarra Yarra and Peninsula Kingswood (South). Brady Watt won the inaugural event, and one can only hope it gains traction.

“It’s the best courses that we have, set up as well as they can be set up, with the best players we can find,” Ogilvy told Golf Australia magazine. “That’s a pretty good formula.”

Webb Simpson was between clubs on the par-3 17th at the Hero World Challenge, which is not unusual for any player. What was unusual is going from a 7-iron to a 5-iron.

That was the idea of his caddie, Paul Tesori, and they decided to remove the 6-iron in the first week of August.

“I kept having these awkward numbers with my wedges. I just had too big of gaps from the wedges,” Simpson said.

Tesori’s solution was for Simpson to bend the 7-iron to make it stronger and weaken the 5-iron (he had Titleist stamp 5.5 on the club). Removing the 6-iron allowed him to put an additional wedge in the bag, and Simpson is loving it.

It’s worth noting the 5.5-iron is the longest club without a head cover. Simpson carries a driver, 3-wood and 5-wood, and hybrids for his 3-iron and 4-iron. That’s quite the bouquet of head covers, and yes, he hears about it.

“Maybe everybody on tour says something,” he said.

Nelly Korda waits until the season is over before contemplating her biggest events, and this year she had two from which to choose. The 23-year-old American won her first major at the KPMG Women’s PGA Championship at Atlanta Athletic Club, and then won the gold medal in the Toyko Olympics.

“I don’t really like to watch highlights, but I just wanted to reminisce a little,” she said.

So which stood out more, Atlanta or Tokyo?

“I watched KPMG first,” she said. “You grew up wanting to win majors, right? The Olympics weren’t even a thing. Like, you didn’t even dream about going to the Olympics as a golfer. So a major championship is what I strived for most of my career, and finally getting that under my belt felt really, really nice.”

Just don’t get the idea that gold medal was chopped liver.

“And then winning the gold, that’s amazing, too,” she said. “That comes once every four years, and that’s such a huge honor to represent your country and to stand on that podium. ... Both are so high on the spectrum.”

The LPGA Tour has filled out its Florida swing with the LPGA Drive On Championship at Crown Colony Golf & Country Club in Fort Myers. The tournament will be Feb. 3-5 — ending on a Saturday — and will be the third straight LPGA event in Florida. The LPGA Tour then has a three-week break before going to Singapore. ... The field for the Jan. 6-9 Sentry Tournament of Champions at Kapalua is expected to have 25 of the top 40 in the world ranking. ... Collin Morikawa (418), Jon Rahm (343) and Viktor Hovland (307) were the only players to earn at least 300 world ranking points in 2021.

Eighteen players in the Sentry Tournament of Champions were not even born when Phil Mickelson played the winners-only PGA Tour event for the first time.

“Tiger Woods, really, is the best player that ever lived, but it won't go down in the record book as such because Jack Nicklaus' record is better. You can only go by the record book.” — Gary Player.