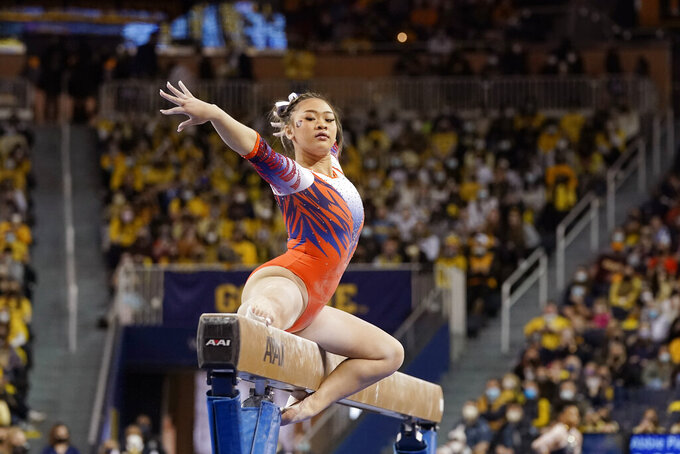 Auburn gymnast Sunisa Lee performs during a meet at the University of Michigan, Saturday, March 12, 2022, in Ann Arbor, Mich. A record crowd came out to watch Lee, the reigning Olympic champion, and Auburn take on defending national champion Michigan. The arrival of Lee and several of her Olympic teammates at the collegiate level is helping fuel a spike in interest and participation in NCAA women's gymnastics. (AP Photo/Carlos Osorio)

FORT WORTH, Texas (AP) — For decades, college gymnastics lived in the shadow of elite competition.

The Olympics were the Olympics. And what happened outside of that rarified air was ... not that.

“When I started in collegiate gymnastics I think that at the elite level, they kind of looked down on college gymnastics, as if we were the place that good gymnasts went to die,” said Bev Plocki, longtime head coach at defending national champion Michigan.

The narrative has changed over the last 15-plus years, as the number of elite athletes who made their way to the college level has grown from a trickle to a steady stream.

Their arrival has provided jet fuel to a movement that's been p icking up momentum in recent years in terms of visibility and cache. The prevalence of social media, increased TV coverage and relaxed rules that allow NCAA athletes to cash in on their name, image and likeness has given college gymnastics some serious buzz.

From a competitive standpoint, even with the influx of Olympians and former U.S. national team members, parity has never been greater, due in large part to college gymnastics' emphasis on precision over difficulty. Lee and her Olympic teammates are hardly shoo-ins to dominate the podium in the individual all-around competition Thursday and in the team finals Saturday.

Michigan, in fact, used a core of athletes who never competed at the elite level to claim its first title last spring, beating programs whose rosters are dotted with athletes who competed for the U.S. internationally.

How did that happen? A quick primer on the differences between NCAA and elite gymnastics.

Competitive gymnastics is divided into levels, from 1-10. Gymnasts who reach Level 10 typically have the option to test into “elite” at some point, an avenue that usually first becomes available when they are around 12 years old.

While only a few move on to elite, the vast majority who reach Level 10 have the opportunity to compete collegiately.

Elite gymnastics is considerably more difficult, with routines that are longer and packed with more elements. College routines are shorter and “easier” by definition, though some of that is due to the nature of the competition season and the fact the athletes are full-time students.

At the elite level, gymnasts practices 30+ hours a week. Many are home schooled and their training is geared to have them peak a handful of times a year, with those meets spread out so their bodies can recover.

College competition season runs from January-April. For Auburn and the other seven teams vying for the team title as well as the athletes who qualified for nationals as individuals, this week's finals will be at least their 13th meet in a span of just over three months.

Throw in NCAA rules that limit training to 20 hours a week and trying to cram routines with a ton of elite-level connections doesn't make much sense.

HOW DOES SCORING WORK?

While the 10-point scoring system disappeared from elite gymnastics in 2006, it is thriving collegiately.

In elite gymnastics, the open-ended scoring system allows mistakes in form that can be made up by increasing the difficulty of a routine. The 10.0 system in college puts a premium on precision.

“In elite, like for the big tricks, you’re given a bonus and for just doing big tricks, not necessarily doing them perfectly,” said Lisa Bowerman, head coach at Texas Women’s University, a Division II program that is serving as host for nationals.

While the routines may be “easier” by definition, the slightest wobble can be the difference between winning a national championship or finishing off the podium.

“A lot of what makes a team successful in college gymnastics is culture and the ability to handle the pressure of competition," said Jordyn Wieber, the Arkansas coach, 2011 world all-around champion and a member of the gold medal-winning 2012 U.S. women’s Olympic team. “It's not based on how many hard skills you can do. And because of that you don't need a full team of elites to win a national championship."