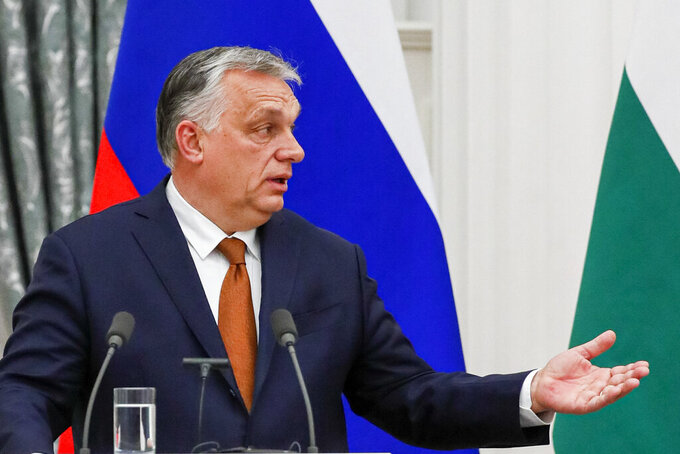 Hungary's Prime Minister Viktor Orban gestures while speaking to the media during a joint news conference with Russian President Vladimir Putin following their talks in the Kremlin in Moscow, Russia, Tuesday, Feb. 1, 2022. Putin says the U.S. and its allies have ignored Russia's top security demands. In his first comments on the standoff with the West over Ukraine in more than a month, Putin said Tuesday that the Kremlin is still studying the U.S. and NATO's response to the Russian security demands received last week. (Yuri Kochetkov/Pool Photo via AP)

LAUSANNE, Switzerland (AP) — Swimming will have world championships after all in 2022, with Hungary’s Prime Minister Viktor Orbán and the sport’s world governing body jointly announcing the “extraordinary” event on Monday.

Budapest will host an additional world championship from June 18-July 3 to fill a gap left by the scheduled event in Japan being pushed back to 2023 because of the COVID-19 pandemic.

The Hungarian capital hosted the worlds in 2017 and was already slated for another turn in 2027 before the latest award. The championships are usually held every two years.

Orbán, who faces parliamentary elections in April against a broad coalition of rival parties, was singled out for praise by FINA.

“We are extremely fortunate to have event hosts that share our passion for aquatics and have the willingness, capability and flexibility to organize FINA’s most prestigious event,” Husain al-Musallam, president of the sport's international governing body, said in a statement Monday. “We know we need to be imaginative in our approach in navigating through the current health crisis for our athletes. Today’s agreement is a testament to this work.”

The world’s best swimmers, divers and water polo players are now set to have three world championships in about 18 months, then the 2024 Paris Olympics.

The Japanese city of Fukuoka was originally set to host the championships last year, but it was pushed back one year to avoid a scheduling clash with the postponed Tokyo Olympics.

A second delay agreed last month from its May 2022 slot sent Fukuoka’s hosting to July next year.

The Paris Olympics open in July 2024.