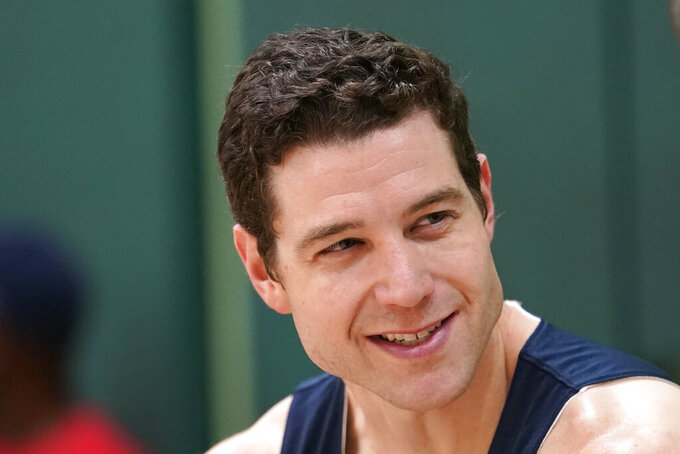 MIAMI LAKES, Fla. (AP) — Jimmer Fredette has already had quite a basketball life. National college player of the year at BYU. An NBA lottery pick. Played for five different NBA teams. Played professionally in China, played as a pro in Greece as well.

His next target: France.

Specifically, France in the summer of 2024.

Fredette is trying to be part of USA Basketball’s 3x3 team for the Paris Olympics, and the sharpshooter’s first big step toward making that a reality comes this weekend when he’ll play for the Americans in the FIBA 3x3 AmeriCup in Miami.

“Paris, that’s the hope and the goal with this whole thing,” Fredette said. “It’s a good way to stay competitive, keep playing but also be able to be with my family more. Having three little kids, a couple in school, it’s hard to leave them for a long time. So, it’s a great opportunity. I’m super excited about it.”

The native of Glens Falls, New York, now makes his home in Denver, with his wife and their three kids. Fredette, if he wanted to, could be playing in China right now; he’s played over there for many years and it’s been a lucrative experience. He also has played in Greece. But it’s also meant being away from home, and that doesn’t interest him much anymore.

U.S. coach Fran Fraschilla, a longtime college and draft broadcaster and analyst for ESPN, gave Fredette a call to gauge his interest. Fraschilla was a pretty good recruiter when he coached in college, and he got Fredette to commit pretty easily.

“He’s unbelievable and he’s still got game,” Fraschilla said. “When he came to training camp in New York a couple weeks ago, we were hoping he’d be as good as we thought he was. And he was. He’s Jimmer. In the right circumstance, he can literally play anywhere in the world, including the NBA. I think Jimmer, unfortunately, was never in the right places in the NBA that valued what he can do. He can give us six to 10 weeks a year and he’ll have a great shot at being part of our Olympic team if we qualify.”

The U.S. didn’t get a men’s team qualified for 3x3 when it debuted on the Olympic program in Tokyo. The women not only qualified, but the team of Kelsey Plum, Stefanie Dolson, Allisha Gray and Jackie Young won gold at those games for the U.S.

The U.S. has a team in the women’s side of the AmeriCup this weekend as well, with Veronica Burton, Lexie Hull, NaLyssa Smith and Camille Zimmerman set to play for coach Jennifer Rizzotti. Fredette will be joined on the men’s side by Canyon Barry, Kareem Maddox and Dylan Travis.

“Jimmer is as good a player outside the NBA right now, in America, as anybody would have," Fraschilla said.

The 3x3 game is very fast; games are played to 21 points, field goals inside the arc are worth one point, beyond the arc are worth two points. Games last no more than 10 minutes, with a 12-second shot clock and no breaks after scores. It’s constant movement, a very different game than the one that Fredette has played most of his life.

“But there are things I feel comfortable with,” Fredette said. “When I get the ball, and I’m dribbling and I’m in space, I’ll be able to create a play and make shots. There’s a lot of space in this game if you use it correctly, which is very, very helpful.”

It’s also played outside. Wind can affect some shots. Weather can make conditions tough. It’s not always ideal for shooters, and ego might keep some — particularly those who have played at Fredette’s level — from trying the 3x3 game.

“For me, it’s a new challenge,” Fredette said. “I was getting a little stagnant with 5-on-5 basketball, going overseas, leaving my family. All that stuff is really difficult on me. I wasn’t having fun doing it for a couple of those last years because I couldn’t always be with people that I really loved.”

His family couldn’t be with him in China when he was there.

If all goes right, they’ll be with him in Paris in a couple years.

“I think about the opening ceremony with Team USA, being able to watch all the events, being able to play and get to compete for a gold medal,” Fredette said. “I mean, how cool is that?”