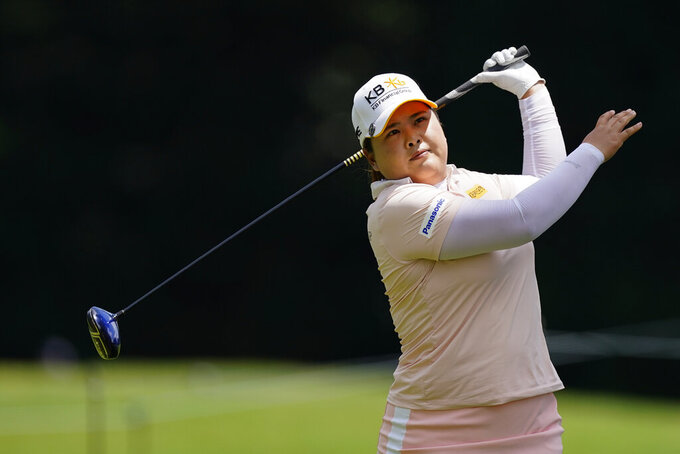 Inbee Park of South Korea tees off on the sixth hole during the third round of play in the KPMG Women's PGA Championship golf tournament Saturday, June 26, 2021, in Johns Creek, Ga. (AP Photo/John Bazemore)

Nelly Korda goes to the Olympics as the No. 1 player in the world, and the Americans will have one extra player than they had in 2016.

The 60-player field for Tokyo was set Tuesday, although players for the men's and women's competitions will not be certified until next week.

Countries were allowed two players until the field was full, with a maximum of four provided they were among the top 15 in the women's world ranking. South Korea, the powerhouse in women's golf, again had all four, with Hyo-Joo Kim at No. 6 in the world getting the last spot.

Inbee Park easily made it back in her bid to win a second gold medal. The other medal winners from Rio de Janeiro, Lydia Ko of New Zealand (silver) and Shanshan Feng of China (bronze) also will be in Japan.

The Americans had only three players within the top 15 in the world for the 2016 Games. This time they will have four, including a pair of sisters. Korda, coming off her first major title in the Women's PGA Championship, will be joined by older sister Jessica, who is No. 13 in the world.

The other Americans are Danielle Kang (No. 5) and Lexi Thompson (No. 9). Thompson is the only returning American in the Olympics.

Park and Sei Young Kim return to the Olympics for South Korea. Hyo-Joo Kim and Jin Young Ko, who had been No. 1 in the world until Korda replaced her last week, are newcomers.

Charley Hull of England and Lee Anne Pace of South Africa were the only players who chose to withdraw. Hull played in the last Olympics and said on Instagram she would not be returning because of scheduling and traveling.

Hull was replaced by Georgia Hall, a former Women's British Open champion. Pace would have been the second South African in the field. That spot went to Maha Haddioui of Morocco, the No. 418 player in the world.

The men had 15 players choose not to play, compared with 22 withdrawals in Rio, when golf returned to the Olympic program for the first time since 1904.