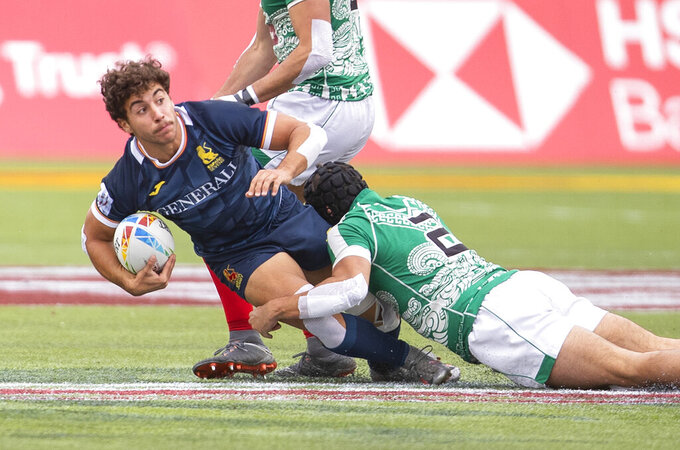 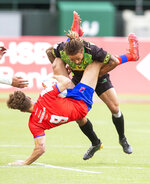 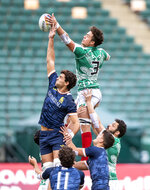 EDMONTON, Canada (AP) — Muller du Plessis scored his 10th and 11th tries of the weekend to lead series-champion South Africa to a 24-12 win over Britain in the Edmonton Sevens men's final on Sunday.

South Africa needed only to make the final at Edmonton to be crowned series champion after its tournament victory in the Vancouver, British Columbia leg last week in a shortened 2021 series due to the coronavirus pandemic.

After Robbie Fergusson gave Britain the lead with a second-minute try, du Plessis scored in the fourth and seventh minutes to give South Africa a lead they never relinquished. Captain Siviwe Soyizwapi also scored two tries for the winners.

“It was an amazing team effort here, but also a lot of help from home — the academy, the scouts," Soyizwapi said just before the trophy presentation.

Tom Bowen scored a late try for Britain, his 99th in sevens competition. He was only meters from his 100th when tackled into touch by du Plessis with several minutes remaining.

Kenya beat Canada 33-14 for third place on Sunday and Germany beat the United States 24-19 for fifth.

The back-to-back Canadian tournaments were missing many of the top-ranked teams due to COVID-19 travel and quarantine restrictions, including Tokyo 2020 Olympic gold medalists Fiji, silver medalists New Zealand, Australia and Samoa.

In the four-team women's tournament, Britain defeated the U.S., 22-5. Canada beat Mexico 63-5 for third place, mirroring the results from Vancouver.

The series will be idle until two combined men's and women's tournaments are scheduled back-to-back in Dubai, United Emirates to kick off the 2022 season. Those events are scheduled for Nov. 26-27 and Dec. 3-4.

Series officials also said that planned tournaments for Sydney, Australia and Hamilton, New Zealand scheduled for early next year will not be held due to pandemic restrictions in those countries. Replacements tournaments are being planned.