US Open Lookahead: Djokovic, Zverev again in a semifinal 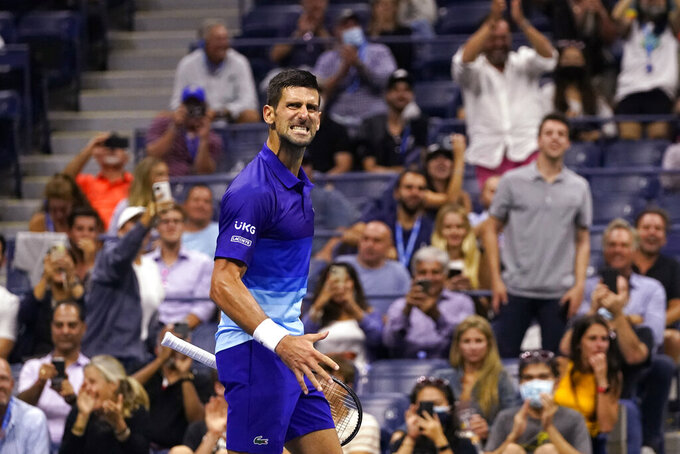 Novak Djokovic, of Serbia, reacts after scoring a point against Matteo Berrettini, of Italy, during the quarterfinals of the U.S. Open tennis tournament early Thursday, Sept. 9, 2021, in New York. (AP Photo/Frank Franklin II)

Novak Djokovic’s bid for an Olympic gold medal was stopped in the semifinals in Tokyo by Alexander Zverev. Now it’s Zverev again who can end the top-seeded Djokovic’s quest for the first calendar-year Grand Slam in men’s tennis since Rod Laver in 1969. They meet in the second semifinal Friday, after No. 2 seed Daniil Medvedev faces No. 12 Felix Auger-Aliassime, the first Canadian to make the U.S. Open men’s semifinals. Zverev rallied from a set down to beat Djokovic in Tokyo, then went on to win the gold medal for Germany. Seeded fourth in Flushing Meadows, Zverev has won 16 straight matches since Auger-Aliassime beat him at Wimbledon. Djokovic won the championship there for his 20th Grand Slam title, tying Roger Federer and Rafael Nadal for most by a men’s player. With a victory Friday, Djokovic will tie another Federer record with his 31st appearance in a Grand Slam final. Medvedev is trying to return to the U.S. Open final, where he lost to Nadal in 2019. The Russian was beaten in straight sets by eventual champion Dominic Thiem last year in the semifinals. The men’s doubles final and the women’s doubles semifinals are also on Friday’s schedule.

STAT OF THE DAY

3 — Number of top-five players Fernandez has defeated at the U.S. Open, with victories over No. 2 Sabalenka, No. 3 Naomi Osaka and No. 5 Elina Svitolina.

QUOTE OF THE DAY

“I wouldn’t say that she did something. I would say that I destroyed myself.” — Sabalenka, on how Fernandez turned around their match after the Belarussian raced to a 3-0 lead.