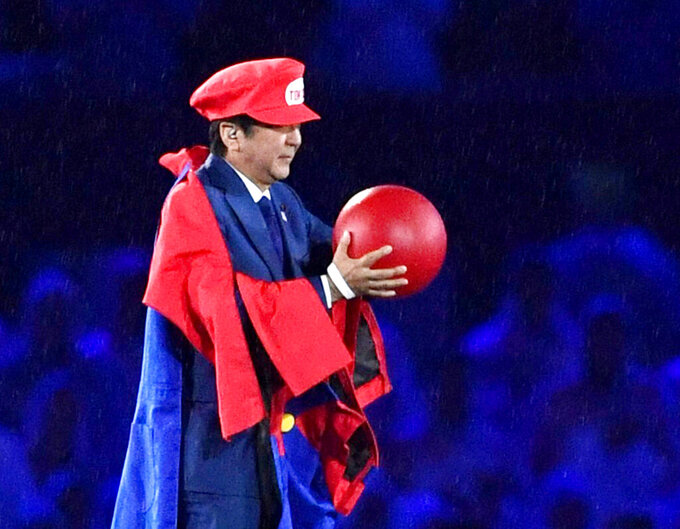 FILE - Then Japanese Prime Minister Shinzo Abe appears as the Nintendo game character Super Mario during the closing ceremony at the 2016 Summer Olympics in Rio de Janeiro, Brazil on Aug. 21, 2016. Despite his fame as a Japan's longest serving prime minister, Shinzo Abe might have had enjoyed his biggest moment at the closing ceremony of the 2016 Rio de Janeiro. (Yu Nakajima/Kyodo News via AP, File)

TOKYO (AP) — Despite his prominence as Japan’s longest serving prime minister, Shinzo Abe may have enjoyed his biggest moment at the closing ceremony of the 2016 Rio de Janeiro Olympics before 70,000 at the city’s renown Maracana stadium.

As a video was shown with Abe portrayed running late for the handover ceremony, the Japanese prime minister suddenly popped up on stage in Rio — to loud applause — dressed as Super Mario, the famous Nintendo video game character.

He doffed his red cap to the crowd, and there could be no mistake where the Games were going next. The lettering on his red cap spelled it out: Tokyo.

Abe died on Friday after he was shot giving a campaign speech in the western Japanese city of Nara.

Ever a showman, Abe pushed for the Tokyo Games from the start and then helped keep them on track after being postponed for a year by the COVID-19 pandemic.

He was in Buenos Aires, Argentina, in 2013, seated in the front row of a hotel ballroom when then-IOC President Jacques Rogge opened an envelope to reveal Tokyo as host of the 2020 Games. Seated at the heart of the Japanese delegation, Abe leaped to his feet, raised his arms high, and waved a flag festooned with the logo of Tokyo's bid committee.

Abe and Japan famously campaigned for those Games under the motto “a safe pair of hands." This was at a time when Sochi, Russia, and Rio de Janeiro were the focal point of relentless criticism for their preparations; Sochi for the 2014 Winter Olympics and Rio for the 2016 Summer Games.

And it was Abe who, in a closing speech to the International Olympic Committee before the vote in Buenos Aires, reassured members that the Fukushima nuclear disaster — which happened in 2011 — was “under control.”

However, it wasn't so. That area of northeastern Japan is still battling to recover even a decade after the tragedy. Many in the region feel the Olympics detracted from the recovery, rather than helped speed it.

Tokyo defeated Istanbul 60-36 in the final round of secret voting in 2013. Madrid was eliminated after an initial tie with Istanbul in the first round of voting.

And it was Abe and IOC President Thomas Bach who had the final word in March 2020 in postponing the Games in the face of surging COVID-19 deaths. Bach said in a statement on Friday that the delayed Games went on — only because of Abe.

“Only his vision, determination and dependability allowed us to take the unprecedented decision to postpone the Olympic Games Tokyo 2020,” Bach said. He said that without Abe “these Olympic Games would never have happened."

He called Abe “a man with a vision, full of determination and boundless energy to make his vision come true. What I appreciated most about him was that he was a man of his word.”

Bach said the Olympic flag at the IOC headquarters in Lausanne, Switzerland, would fly at half-staff for three days.

Abe was probably the No. 1 booster of Tokyo's 2020 Games, which he hoped would be a reminder that Japan was still a power in Asia despite the rise of China. But he stepped down from office, claiming poor health, late in August 2020 — just under 11 months before the delayed Games would actually open.

“I thought for him, not being able to be prime minister at the time of the Olympics, was somewhat heartbreaking,” David Leheny, a political scientist at Japan's Waseda University, said in an interview with The Associated Press. “He had put so much work into it, and I think for him it was emblematic of Japan reemerging as a leader on the global stage.”

Abe was replaced by Yoshihide Suga, who oversaw the Olympics but left office just weeks after they ended. Suga was criticized for his handling of the pandemic.

“Given how important the 1964 Tokyo Olympics were to many people — in announcing Japan's emergence after World War II — I think for Abe having the Olympics in Tokyo in 2020 was meant to be the same thing," Leheny added. "And he certainly wasn't shy about making himself central to the process."