After Warholm's WR stunner, a look at track's great races 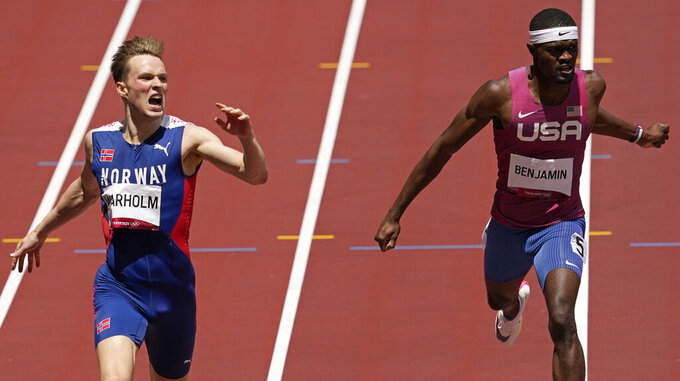 Karsten Warholm, of Norway celebrates as he wins the gold medal ahead of Rai Benjamin, of United States in the final of the men's 400-meter hurdles at the 2020 Summer Olympics, Tuesday, Aug. 3, 2021, in Tokyo, Japan. (AP Photo/Charlie Riedel) 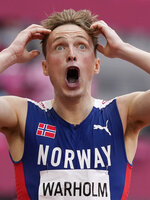 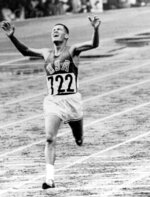 TOKYO (AP) — Karsten Warholm's staggering run to shatter his own 400-meter hurdles world record at the Olympics on Tuesday has posed the question: Was it the greatest track race ever? Maybe.

Warholm won gold in 45.94 seconds, carving .76 seconds off his previous mark and taking the 400 hurdles sub-46 and into new territory. Rai Benjamin's 46.17 for silver also broke the world record of 46.70 seconds. Alison dos Santos came within a whisker of it in third place with 46.72.

Three of the four fastest times in the history of the event in the same jaw-dropping race. Benjamin said it's the best race ever. Warholm said it might be.

There's no definitive answer in this great debate, but here are a few other possible contenders for the “G.O.A.T.” when it comes to track races:

In terms of pushing the boundaries of human possibility, Usain Bolt's 100-meter world record of 9.58 seconds at the 2009 world championships has to be considered. No one came within touching distance of the Jamaican that night in Berlin as he took track's most treasured mark to a place no one believed possible.

It's more than a decade later and still no one else has gone below 9.69 seconds.

American Billy Mills delivered an epic finish in the 10,000 meters the last time the Olympics were in Tokyo, in 1964. Mills set an Olympic record of 28 minutes, 24.4 seconds, but it was the drama of his victory that made it unforgettable.

Mills led at the final bell ahead of world-record holder Ron Clarke of Australia. Mills suddenly got a shove from Clarke and Tunisia's Mohammed Gammoudi then elbowed his way between both of them. With back markers littering the track and Mills now well behind the other two, he suddenly unleashed a burst of pace that took him surging to victory.

Mills was the first and is still the only American to win gold in the 10,000 at the Olympics.

At the 1996 Atlanta Olympics, Michael Johnson had golden running shoes and one gold medal already in the 400 meters. But he produced the Games' real golden moment in the 200.

He was an unbeatable mix of power and precision to win in 19.32 seconds, break the 200-meter world record for the second time in just over a month, do it at his home Olympics, and complete a 200-400 double. A quarter-century later, only Bolt and Yohan Blake have gone faster in the 200.

Another piece of 400-meter hurdles history, this time in the women's race.

Everyone knew Dalilah Muhammad and Sydney McLaughlin were likely to produce a great contest at the 2019 world championships after their thrilling rivalry through the season. It turned out to be one of the greatest.

Muhammad had a solid lead into the final straight but McLaughlin refused to give in. With McLaughlin bearing down on her, Muhammad just won in a world record of 52.16 seconds, breaking the mark of 52.20 she set three months earlier. McLaughlin's 52.23 was the third-fastest time ever.

Britain's Roger Bannister broke through one of track's most momentous barriers when he ran the first sub-four-minute mile on May 6, 1954.

Less than two months later, Australia's John Landy bettered that time. They met in the mile race at that year's Commonwealth Games in Vancouver, Canada, and it quickly came down to just the two of them.

Landy appeared much stronger and opened a big lead at one point. Bannister clawed his way back. Landy was still in front on the last turn, but his mistake of looking over his left shoulder for his opponent as Bannister overtook him on the right is part of legend. Bannister bolted and won a beautiful battle of two distance-running greats.