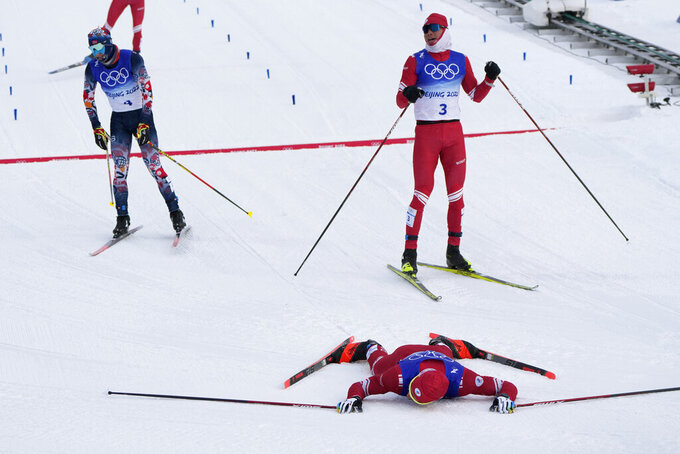 ZHANGJIAKOU, China (AP) — The windy conditions played right into the hands — and skis — of Alexander Bolshunov.

The race was delayed by an hour and then shortened from the originally planned 50 kilometers because of frigid temperatures and strong wind. The temperature hovered around minus 18 degrees C (0 degrees F).

“Overall I can say that when the conditions are harder, this is in my favor because when it is harder, it is easier for me,” Bolshunov said. “In the morning the weather was harder. The wind was stronger and the temperature was colder. When we started the race, the weather got a bit better and I think today we could have skied 50 kilometers.”

Bolshunov was part of a five-man breakaway in the last kilometer. He pushed ahead on the final climb into the stadium and won in 1 hour, 11 minutes, 32.7 seconds.

Bolshunov, who is coached Yuri Borodavko, also won gold in the skiathlon and the relay at the Beijing Games. He took silver in the 15-kilometer classic ski race and bronze in the team sprint.

Krueger was competing in his first race at the Beijing Games after testing positive for COVID-19 at the end of January. He arrived in China late.

“It was a victory for me to just be able to race here today after being ill with COVID and being stuck in isolation for 10 days,” Krueger said. “I was isolating in my hotel room when the first competitions were here, so I didn’t think I would be able to race at all at this championship.

“Then I got the chance to go to the last race. To be able to go home with an Olympic medal, that’s a huge victory for me and an amazing feeling.”

World Cup leader Johannes Hoesflot Klaebo fell off the back of the lead group about 33 minutes into the race. He took his bib off and walked off the tracks with about 7.9 kilometers still to go.

He said he had a stomach bug the night before and didn’t sleep well.

The brutal cold has taken a toll on the athletes. Most wore tape on their faces to protect against the wind and many had frost crested around their mouths at the end.

The snow was so cold it sounded like lasers firing as the racers skied by. Cold snow creates friction with the base of the skis, making a squeaky noise with each pole and glide.

The skiers stayed together through the first lap, which helped protect them from the wind. About 16 skiers pulled ahead at the 28-minute mark.

American skier Scott Patterson, who finished 11th in the 50-kilometer race at the 2018 Pyeongchang Games, stayed with the leading pack until the final push and ended up in eighth place.

It was the best Olympic result for an American man in cross-country skiing since Bill Koch won silver at the 1976 Innsbruck Games.

“I tried to stay pretty calm,” Patterson said. “I felt pretty strong, pretty relaxed. I’m happy. I came in wanting a top 10 and got it today.”